“IT WAS AN EXCUSE FOR LOSING AN ELECTION” 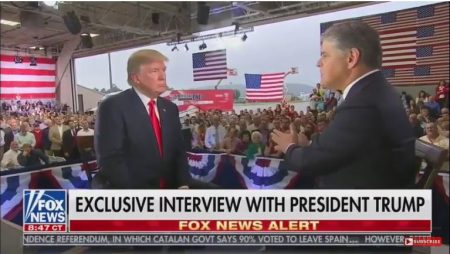 (Oct. 12, 2017) — In an interview aired on Wednesday on the “Hannity” show on the Fox News Channel, host Sean Hannity sat down with President Donald Trump to discuss a wide spectrum of issues, including the North Korean nuclear menace, tax reform, health care, and WikiLeaks founder Julian Assange.

Since mid-August, after U.S. Congressman Dana Rohrabacher met in person with Assange in London, Rohrabacher has interviewed with Hannity on both his radio and television shows regarding evidence Assange has alleged he possesses demonstrating that the narrative provided to the American people by three U.S. intelligence agencies that the DNC server was “hacked” in 2016 by Russian government operatives is false.

As a result of the breach, thousands of emails were released to WikiLeaks, which began publishing them on its website in July 2016, just days before the opening of the Democratic National Convention to nominate its presidential candidate.

In late August, Rohrabacher told Hannity that he is “99%” sure that Assange’s claims are accurate, although it appears he himself has not seen the evidence.  The longtime Republican California Congressman has indicated that he is attempting to schedule a face-to-face interview with Trump through Trump’s Chief of Staff, Gen. John F. Kelly (Ret) to share the information Assange imparted to him.

During Wednesday night’s interview with Trump, Hannity raised the subject of Assange, stating to the president that Assange is apparently proposing providing the information to Trump in exchange for the Trump administration’s abandoning of prosecution against him for allegedly working with U.S. sources to release sensitive U.S. government documents.

Several months ago, U.S. Attorney General Jeff Sessions stated that prosecuting Assange was “a priority” of the Trump administration. Assange has denied any conspiracy or wrongdoing in publishing the documents alleged to have been provided by former Pfc. Bradley Manning. While never confirming his sources, Assange stated that he was only the recipient of the documentation and did not participate in procuring it.

Trump’s campaign aides and associates have been under extensive investigation by Special Counsel and former FBI Director Robert S. Mueller, III and his hand-picked team since May for possible “collusion” with the Russian government to affect the outcome of the 2016 election.  At the same time, the U.S. House and Senate Intelligence Committees are conducting their own investigations into the allegations.

Prior to Mueller’s arrival, the FBI’s probe was led by Andrew McCabe, who “allocated resources and personnel to the email probe.”  McCabe is himself the subject of several probes regarding whether or not he had a conflict of interest in overseeing the investigation into Hillary Clinton’s use of a private email server in his new role as FBI Deputy Director after his wife received money from a PAC associated with Virginia Gov. Terry McAuliffe, a longtime Clinton ally, while running for the Virginia state Senate in 2015.

McCabe’s campaigning for his wife has also been questioned given his position as an FBI agent who is constrained from making political statements.

On August 1, Trump’s nominee for FBI Director, Christopher Wray, was confirmed by the Senate.

Trump has insisted that neither he nor anyone he is aware of as part of his campaign communicated improperly with the Russians.  In a press conference last week, U.S. Senate Intelligence Committee Chairman Richard Burr said that thus far, the committee has found no evidence of Trump-Russia collusion but that the committee will continue its work.

The mainstream media has also widely reported that the Russian government “meddled” extensively in the U.S. 2016 election, including the blanket claim that “Russia hacked our election” without enumerating specifics.

On August 2, 2017, The Washington Post, an increasingly left-leaning outlet, reported:

Last week, Burr confirmed that even with alleged Russian interference in last year’s election processes, no votes were altered and the outcome of the election is not in question, to which ranking member Mark Warner (D-VA) nodded his assent at the time.

The Hannity-Trump interview was conducted at a campaign-type rally stop Trump made in Middletown, PA, outside of Harrisburg, and was interspersed by applause from the attendees.

Hannity opened the subject of Assange with, “One of the things that has come up almost throughout your whole presidency is this ‘Russia, Russia, Russia, Russia’ obsession.  Here’s my question:  I interviewed Julian Assange five times; I’ve talked to him other times.  He has said, ‘It’s not Russia; there was no collusion; it didn’t come — the DNC (inaudible) did not come from them.’  Congressman Dana Rohrabacher met with him, and he said he has proof positive evidence that would show the Trump campaign never colluded with Russia.  He just wants — Is it in the best interest of the country, that if he has that information that he should give it, it seems, I’m guessing here, he wants in return to be left alone.  Should the country — Does the country deserve to know the truth if he has that?”

Trump responded, “The country has to know the truth, and also, we can’t let anybody play around with our voters and our voters system.  But I have to tell you this; it’s so important:  ‘Russia’ was an excuse used by the Democrats when they lost the election.  They said — They lost the election. They sat in a room, and they said, ‘Wow, we were bad’…But they said, ;”Why did you lose the election?  They said, ‘Nah, it was Russia, Russia!’  It wasn’t Russia; it was a bad candidate; it was a candidate that didn’t go to Wisconsin and Michigan…it was a candidate that spent tremendously more money than I did, as you know, more than double, that didn’t do well in Pennsylvania, this great state…”

Trump went on to enumerate more states which Hillary Clinton lost.  He continued:

Now, with all of that being said, their candidate — but they said ‘Russia. Then they say, “Ah, and it was Trump that colluded with Russia. I’m saying, “I did?”  So look, here’s the story:  this was an excuse by the Democrats – and people got carried away — this was a terrible – and it’s very bad for our country what’s happened, because I had nothing to do with Russia during this campaign.  Forget it; forget it.  This was an excuse that was used by the Democrats; it was an excuse for losing an election that frankly, they should have won…

The interview can be viewed below and on YouTube.

Not discussed with Trump was Rohrabacher’s contention, focusing on the source of the DNC email breach, who WikiLeaks has strongly suggested was slain DNC staffer Seth Rich.

Rich’s July 2016 murder remains unsolved, but Assange has stressed that his source of the DNC emails was not a “state party” and offered a $20,000 reward for information leading to Rich’s killers within several weeks of the young man’s death in Washington, DC.

The mainstream media has visibly worked to silence anyone, including Hannity, who has questioned the “Russia” hacking narrative as well as the theory, supported by statements from Internet entrepreneur Kim Dot.com, that Rich supplied the DNC emails to Wikileaks.