TWITTER FANS LAVISH PRAISE ON PRESIDENTS’ DAY, BUT WAS HE ELIGIBLE? 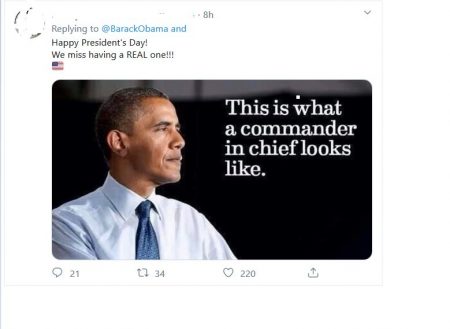 (Feb. 17,. 2020) — On Monday’s federal holiday known as “Presidents’ Day,” Barack Hussein Obama tweeted, “Eleven years ago today, near the bottom of the worst recession in generations, I signed the Recovery Act, paving the way for more than a decade of economic growth and the longest streak of job creation in American history.“

Obama was referring to the American Recovery and Reinvestment Act of 2009 (ARRA), also known as the “Stimulus bill” passed by the 111th Congress during Obama’s first full month in the White House.

Some expressed disbelief that Obama’s signing of the ARRA is responsible for the economic growth seen since 2016, when in November former businessman and reality-show star Donald Trump was elected president over Democrat Hillary Clinton.

Not surprisingly, Trump disagreed with Obama’s claiming credit for stimulating the U.S. economy during what is often referred to as the “Great Recession.” 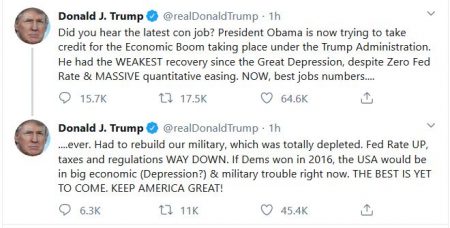 Obama supporters and detractors responded to his tweet, with the former at times expressing the view that he was a “real” commander-in-chief.

But was Obama a “real” president after all?

Following months of pressure by Trump himself, on April 27, 2011 the Obama White House released what it said was a scan of a certified copy of Obama’s “long-form” birth certificate acquired from the Hawaii Department of Health by his then-personal attorney, Judith Corley of Perkins Coie.

Perkins is the mega-law firm which in 2016 transferred DNC/Clinton campaign funds to Fusion GPS for the purpose of gathering opposition research on Donald Trump from Russia.  Fusion in turn hired former British intelligence agent Christopher Steele to complete the task.  It was Steele’s unverified “dossier” which was used to obtain four FISA warrants on former Trump informal adviser Carter W. Page as part of the FBI’s “Crossfire Hurricane” counterintelligence operation into the Trump campaign.

Last month, the FISA Court and Justice Department admitted that two of the four warrants were applied for without valid predication, with the remaining two likely under investigation.

Almost immediately upon its publication, the long-form image was said to be fraught with items suggestive of forgery, a claim the White House did not address.  Several experts staked their reputations on their findings that the image was manufactured rather than representative of an original paper document.

On the morning the image was posted to much media fanfare, then-White House Counsel Robert Bauer said during a closed-door presser that special dispensation from the HDOH was necessary to procure the long-form birth certificate and that no originals of the purported document would be made available.

However, NBC’s Savannah Guthrie claimed she “felt the raised seal” on the copy she received.

In August 2011, then-Maricopa County Sheriff Joseph Arpaio launched an investigation into the long-form birth-certificate image, the catalyst for which was a petition signed by 242 of his constituents concerned about voter disenfranchisement if, in fact, the “birth certificate” proved fraudulent.

Arpaio delegated an initial analysis to his “Cold Case Posse,” one of a number of volunteer groups assisting the Maricopa County Sheriff’s Office (MCSO) in various areas of expertise.  After several days the group, consisting of former law-enforcement and legal professionals, through its leader, Mike Zullo, informed Arpaio that they were unable to clear image as authentic.

That finding proved the catalyst for what became a 5+-year criminal investigation conducted by Zullo which determined within the first six months that probable cause existed to believe the image a “computer-generated forgery.”

Although not part of the probe, questions as to Obama’s constitutional eligibility had swirled for years stemming from mainstream-media reports which reported him as born in Kenya or Indonesia and not Hawaii, as he claimed at various times in his political career.

Prior to running for president, Obama served as the junior U.S. senator from Illinois, his adopted state, without completing his first term.  He originally entered politics in 1995, successfully being elected to the Illinois state senate in November 1996.

As both a state and U.S. senator, Obama was not required to be a “natural born Citizen,” a criterion reserved solely for the president and commander-in-chief of the U.S. Armed Forces.  The presidential eligibility criteria in Article II, Section 1, clause 5 of the U.S. Constitution are stated as:

In 2008, questions had arisen after an image appeared on Obama’s campaign website, FighttheSmears, said to be his Hawaii “birth certificate” but bearing a blacked-out certificate number and no state official’s signature.

The Hawaii Department of Health (HDOH) never confirmed that it issued the “short-form” birth certificate, which was posted at whitehouse.gov along with the mysterious appearance of the “long-form” image.

Notably in 2008, Michelle Obama declared Kenya to be her husband’s “home country.”  During a trip to that country in July 2018, Obama told an audience that “Three years ago, I visited Kenya as the first sitting American president to come from Kenya.”

In August 2018, Zullo said on a radio show that two U.S. intelligence agents had informed him that it is “an open secret” in the nation’s capital that Obama was born outside of the United States and would therefore be unable to prove his constitutional eligibility to serve as president.

To the public’s knowledge, no federal-level investigation has been opened into the inconsistencies in Obama’s life story and the reported forgeries of the only “documents” released on his behalf.

Zullo has called the birth-certificate forgery “the foundational lie” of the Obama “presidency.”

16 Responses to "Was Obama a “Real” President?"