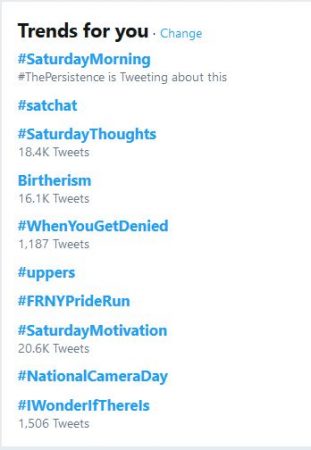 (Jun. 29, 2019) — The fourth-most-popular trend on Twitter Saturday before 9:00 a.m. EDT was “Birtherism,” a pejorative which refers to questions about the constitutional eligibility of a presidential candidate and is often paired with claims of “racism.”

At the top of the Twitter trend for a time was a reposting of a 2016 article at The Washington Post titled, “Birtherism was why so many Republicans liked Trump in the first place,” later replaced with The Daily Beast‘s “Kamala Harris is Surging and Birtherism is Back.”  Neither site will allow a reader using an ad-blocker to read the material.

The term “birtherism” is invoked most frequently by those on the political left in their umbrage over many Americans’ questions about Barack Hussein Obama’s eligibility given credible and longstanding reports that he was born in Kenya or Indonesia rather than Hawaii, as he claims.  Faulted for the growth of the “movement” is the current U.S. president, Donald Trump.

Article II, Section 1, clause 5 of the U.S. Constitution requires the president to be a “natural born Citizen,”a term of art not defined anywhere in the founding documents.

In July 1787, Founding Father John Jay wrote a letter to George Washington suggesting that the Constitutional Convention mandate that only a “natural born Citizen” could be elected president and “Command in chief of the american army.”

The requirements was reportedly agreed to with little debate.

A second unanswered question regarding Obama’s eligibility is his claimed foreign-citizen father, Barack Hussein Obama of Kenya. When Obama was purportedly born in Honolulu, HI on August 4, 1961, his alleged father was a student at the University of Hawaii with British citizenship.

Because of a change to its constitution in 2010, which the Obama regime supported, anyone with a Kenyan-citizen parent can claim citizenship of that nation, regardless of where he or she was born (p. 17).

On his first presidential campaign website, FighttheSmears, Obama claimed he was eligible for the U.S. presidency by virtue of the 14th Amendment and his alleged birth in Hawaii. However, he also stated that he was born a dual citizen of Kenya and the United States. The U.S. Supreme Court has not ruled on whether or not a dual citizen can be considered a “natural born Citizen,” nor would it consent to issue an opinion on the dozens of lawsuits filed by U.S. citizens claiming that Obama was ineligible for the office to which he was twice elected. 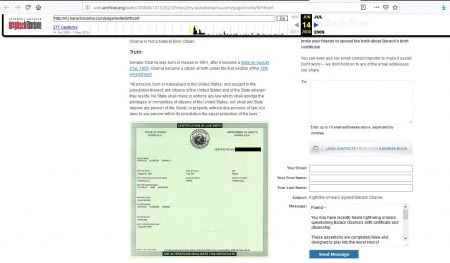 The cases were dismissed by the courts, including former presidential candidate Cody Robert Judy’s renewed challenge to Obama’s eligibility after a 5+-year criminal investigation announced in December 2016 that two well-known forensic analysts, each working from a different discipline, agreed that the “long-form” birth certificate image posted at the White House website in 2011 said to represent Obama’s original birth document cannot be genuine.

Similar questions arose during the presidential candidacies of the late John McCain in 2000 and 2008 based on his birth in the Panama Canal zone, albeit to two U.S.-citizen parents. In 2008, Judy sued McCain based on Judy’s interpretation of the “natural born Citizen” clause to mean “born in the country to U.S.- citizen parents.”

While Sen. Ted Cruz’s eligibility for the presidency was openly questioned in the mainstream media in 2016, the subject has been considered taboo in application to Obama, and, apparently, now Harris.

As The Post & Email has reported, Harris was born in Oakland, CA on October 20, 1964. Some readers have questioned her eligibility not because of her parentage or “ethnicity,” as The Beast article suggests, but rather because it appears neither parent was a U.S. citizen when she was born.

Although not declared on her Senate or presidential websites, Harris spent the majority of her youth through high school in Quebec, Canada, where her mother obtained a position in cancer research.

A statement in 1872 by Ohio Rep. John Bingham recorded in The Congressional Globe indicates that at the time, the common understanding of the term “natural born Citizen” was a person born in the United States to parents who were citizens at the time of the birth, either through naturalization or their own birthplaces.

A number of constitutional scholars and attorneys believe that the “natural born Citizen” clause was placed in the Constitution as a means to prevent foreign influence or allegiance from infiltrating the office of the nation’s chief executive. In Federalist Paper #68, Alexander Hamilton, who himself was born outside of the United States, wrote of the dangers of “foreign powers to gain an improper ascendant in our councils.”  Titled “The Mode of Electing the President” and published prior to the ratification of the Constitution in 1789, the Paper reads, in pertinent part:

Nothing was more to be desired than that every practicable obstacle should be opposed to cabal, intrigue, and corruption. These most deadly adversaries of republican government might naturally have been expected to make their approaches from more than one quarter, but chiefly from the desire in foreign powers to gain an improper ascendant in our councils. How could they better gratify this, than by raising a creature of their own to the chief magistracy of the Union? But the convention have guarded against all danger of this sort, with the most provident and judicious attention. They have not made the appointment of the President to depend on any preexisting bodies of men, who might be tampered with beforehand to prostitute their votes; but they have referred it in the first instance to an immediate act of the people of America, to be exerted in the choice of persons for the temporary and sole purpose of making the appointment. And they have excluded from eligibility to this trust, all those who from situation might be suspected of too great devotion to the President in office. No senator, representative, or other person holding a place of trust or profit under the United States, can be of the numbers of the electors. Thus without corrupting the body of the people, the immediate agents in the election will at least enter upon the task free from any sinister bias. Their transient existence, and their detached situation, already taken notice of, afford a satisfactory prospect of their continuing so, to the conclusion of it. The business of corruption, when it is to embrace so considerable a number of men, requires time as well as means. Nor would it be found easy suddenly to embark them, dispersed as they would be over thirteen States, in any combinations founded upon motives, which though they could not properly be denominated corrupt, might yet be of a nature to mislead them from their duty.

Those studying the “natural born Citizen” question often cite the work of Emmerich de Vattel, who in his “The Law of Nations” wrote:

A Buzzfeed article (h/t CDR Charles F. Kerchner, Jr. (Ret) published Friday appears to echo the theme of The Daily Beast article.  Titled “A New Racist Campaign Against Kamala Harris Is Taking Shape,” it references The Post & Email’s interview of California resident and registered voter Gary Wilmott last August regarding a letter he wrote to Harris’s U.S. Senate office raising questions about her eligibility to which he received no response.

Of that article, Buzzfeed reported that it “received more than 14,000 shares, likes, and reactions on Facebook and was tweeted more than 10,000 times, according to data from CrowdTangle, a social media analytics service.”

In September, a user with a “USSenate” ISP accessed the article.

Our Friday statistics show that not only the August article, but also others focusing on Harris’s and Rep. Tulsi Gabbard’s eligibility, the latest written by Joseph DeMaio, were in high demand. 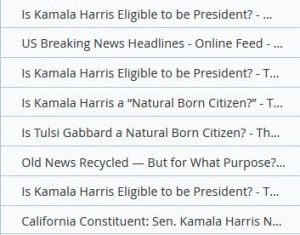 As with Wilmott, Harris’s Senate office did not respond to our inquiries as to whether or not her parents were naturalized when she was born. According to her Wikipedia biography, however, neither lived in the United States for five years prior to her birth, a requirement for a legal resident to apply for citizenship.

Donald Harris’s Stanford University biography states that he is a naturalized U.S. citizen without divulging the year he became so. Harris is now a consultant for the Jamaican government and stridently opposed his daughter’s statement made on “The Breakfast Club” in February that “half my family is from Jamaica.  Are you kidding me?” in tandem with her declared support for decriminalizing marijuana federally.

In response, Donald Harris wrote in JamaicaGlobalOnline, “My dear departed grandmothers(whose extraordinary legacy I described in a recent essay on this website), as well as my deceased parents , must be turning in their grave right now to see their family’s name, reputation and proud Jamaican identity being connected, in any way, jokingly or not with the fraudulent stereotype of a pot-smoking joy seeker and in the pursuit of identity politics. Speaking for myself and my immediate Jamaican family, we wish to categorically dissociate ourselves from this travesty.”

Despite acknowledgments by the mainstream media that an investigation was conducted into the “long-form” birth certificate of Obama’s, no outlet has launched its own independent investigation into the findings, announced by lead investigator Mike Zullo at three formal press conferences and on dozens of radio appearances, that the image is fraudulent and represents “the foundational lie” of the Obama “presidency.”

Further, in an August interview, Zullo told “Freedom Friday” host Carl Gallups that it is “an open secret” that Obama was not born in the United States.