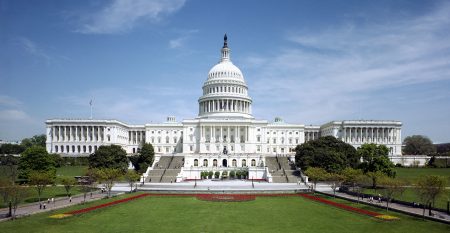 (Sep. 7, 2018) — At approximately 9:30 AM EDT Friday morning, someone utilizing a “U.S. Senate” ISP accessed The Post & Email’s recent article investigating the issue of whether or not Sen. Kamala Harris (D-CA) is a “natural born Citizen” eligible to serve as president.

The article was based on research conducted by California resident Gary Wilmott, who contacted Harris’s office by phone and in writing beginning late last year.

This week, Harris demonstrated her opposition toward, if not open suspicion of, U.S. Supreme Court nominee and current federal appellate Judge Brett M. Kavanaugh amid much media attention.  Although elected to the Senate for the first time in 2016, a campaign website for Harris remains active and has as its first page a petition opposing his nomination.

As evidenced by a Yahoo! search by this writer early Friday afternoon, Harris’s questioning of Kavanaugh has captured the attention of many. 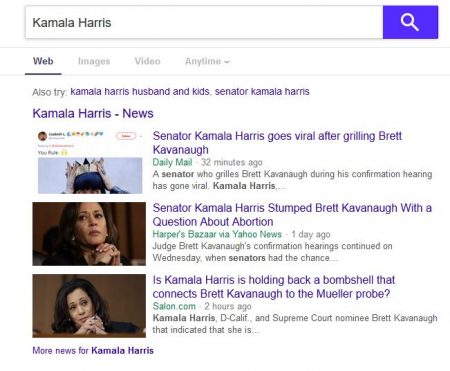 Harris has recently been touted as a possible presidential candidate “more qualified to be president than Donald Trump.”

Last December Wilmott contacted Harris’s office in writing to inform her that based on his research, she does not qualify for the presidency.  “Article II, Section 1, Clause 5 mandates that a president be a NATURAL-born citizen, which you clearly are not,” Wilmott wrote. “At the time of your birth, BOTH of your parents were citizens of foreign countries, so your birth in California makes you at best a NATIVE-born citizen (anchor baby?) under the prevailing view of the 14th Amendment. Lest you think that I have Republican bias I would also point out that presidential wannabes Ted Cruz and Marco Rubio also fail to meet this higher standard of citizenship. Their campaigns were fraudulent and in clear violation of the U.S. Constitution.”

Wilmott later followed up by telephone in an attempt to discover if Harris’s parents were U.S. citizens at the time of her birth on October 20, 1964 in Oakland, CA. His questions were never answered, with the staffer with whom he spoke stating that the citizenship of Harris’s parents is “private” information.

Harris’s mother, who immigrated to the United States at the age of 19 in 1960, passed away in 2009, according to an obituary in the mainstream paper SFGate. Her father, originally from Jamaica, arrived in California a year later and became an Economics professor at Stanford University, retiring in 1998.  His biography states that he naturalized but not specifically when it occurred.

According to federal law, immigrants who arrive in the country legally and apply to become citizens must have resided in the country for five years.  Article I, Section 8 of the U.S. Constitution designates Congress as the body “To establish an uniform Rule of Naturalization” for newcomers permitted to enter the country.

Article II, detailing the role of the nation’s chief executive, contains specific eligibility criteria not expressed in other articles of the Constitution. The criteria, as written by the Framers, are:

The more stringent qualification of “natural born Citizen,” as opposed to simply “Citizen” for U.S. senators and representatives, is believed to have been the Founders’ attempt to prevent anyone with foreign allegiance from leading the newly-minted nation and its military.

Statements recorded in The Congressional Globe and the 1875 U.S. Supreme Court case of Minor v. Happersett, at a minimum, indicate that the term “natural born Citizen” signified an individual born in the United States to parents who were U.S. citizens. Over the years, that meaning, in many circles, has been diluted to mean simply “born in the United States,” or, in some cases, something else entirely.

In 2015, Texas Sen. Ted Cruz declared his candidacy for the presidency amid considerable public controversy as his campaign went forward. Cruz was born in Canada to a mother presumed to have retained her U.S. citizenship at the time and a father originally from Cuba who eventually took Canadian citizenship.

Cruiz’s campaign refused to answer The Post & Email’s questions about his eligibility.

In May 2016, just after Cruz conceded the Republican primaries to then-candidate Donald Trump, The Post & Email was told by a highly reliable source that he had confirmed that Cruz’s mother took Canadian citizenship while the couple resided in Calgary between 1968 and 1974.

While many legal scholars argued that Cruz was eligible to the presidency, there appeared to be an equal number arguing against his eligibility quite publicly.  The same public discussion did not take place concerning Barack Hussein Obama.

In 2007 and 2008, Obama’s eligibility was questioned by many Americans on several points.  For years, credible sources such as NPR and the Associated Press had reported him as having been “born in Kenya,” while a 2006 article in The Honolulu Advertiser stated his birth as having occurred in Indonesia. Some sources later changed their articles to say that he was “born in Hawaii,” but no hospital there has confirmed his birth.  Various mainstream articles and books differ as to exactly when Obama lived in Indonesia, a fact to which Obama has readily admitted.

Numerous outlets reported that at the time Obama allegedly lived in Indonesia, a child had to be a citizen of that country in order to attend school.

In May 2012, Breitbart News published a 1991 promotional booklet written by Obama’s then-literary agent, Acton & Dystel, containing his biography in anticipation of the publication of his first book. The bio indicates Obama as having been “born in Kenya and raised in Indonesia and Hawaii.” After Breitbart published the booklet, Miriam Goderich of Dystel & Goderich explained that Obama’s stated birthplace in the booklet was “nothing more than a fact checking error by me.”

Also at issue for those questioning Obama’s eligibility was his claim of a father born in Kenya, then a British protectorate, who came to the United States to study and never became a U.S. citizen.

Throughout Obama’s campaigns and two-term presidency, the mainstream media refused to investigate whether or not he was, in fact, constitutionally eligible to hold the office.  Anyone questioning his background, citizenship or allegiance was irrationally labeled a “birther” or “a racist.”

On Obama’s 2008 “Fight the Smears” website, he openly admitted to having been born a dual citizen of Kenya and the United States, raising yet another question as to whether or not he qualified as a “natural born Citizen” of the U.S.

An investigation launched in August 2011 and concluded in December 2016 deemed the “long-form” birth certificate image posted by the Obama White House in April 2011 appearing to show his birth in Honolulu a “computer-generated forgery.” Also found to be fraudulent by the same investigators was his Selective Service registration form. Inexplicably, government agencies, including the FBI, refused to take any action.

An article published Wednesday in The Atlantic argues that a Supreme Court candidate who “can’t be vetted shouldn’t be confirmed.” However, when a candidate runs for president, the same thorough vetting often does not take place on the part of the political parties or the voters.

Harris’s Wikipedia page states that she spent her formative years in Montreal, Canada, where her mother worked as a cancer researcher in association with McGill University, which is borne out in Dr. Harris’s obituary.  However, Kamala Harris’s Senate biography arguably implies that she was raised in Oakland and not Canada.  Whether or not her mother became a Canadian citizen while living in Canada with her young daughters for 16 years remains an open question, and, by extension, whether or not Harris herself was ever considered “Canadian” in order to attend school there.