(May 11, 2016) — On Wednesday, former Republican presidential candidate Ted Cruz announced in an email that although his presidential campaign is no longer active, he filed the necessary documents to seek re-election to the U.S. Senate in 2018, when his current six-year term will conclude.

Cruz was elected in November 2012 as a “Tea Party” candidate whose primary campaign attained a stunning defeat of then-Texas Lt. Governor David Dewhurst for the Republican Senate nomination.

On March 23 of last year, Cruz became the first presidential candidate to announce his intentions among questions that his birth in Calgary, Alberta, Canada rendered him ineligible for failing to meet the “natural born Citizen” requirement contained in Article II, Section 1, clause 5 of the U.S. Constitution.

Cruz abruptly suspended his presidential campaign directly following the results of Indiana’s May 3 Republican primary in which Donald Trump won by a double-digit lead.

Although the term “natural born Citizen” is not precisely defined in our founding documents, most Americans interpret it to mean, at a minimum, an individual born in the United States.  For the last eight years, as questions regarding Barack Hussein Obama’s eligibility have remained unanswered, many scholars and researchers have unearthed considerable documentation indicating that the citizenship of one’s parents is also a factor in determining “natural born” status.

Obama claims to have been born in Hawaii to a U.S.-citizen mother and British-citizen father who was in the country on a student visa. While Obama’s birth in the Aloha State, if true, would satisfy the “jus soli” concept of citizenship, the “jus sanguinis” aspect, wherein a child inherits the citizenship of his parents, remains unsettled.

As the 2016 presidential primary season unfolded, some law professors agreed with Cruz that he is eligible for the presidency given that he was born to a U.S.-citizen mother, making him a “citizen at birth.”  Cruz has insisted that he meets the “natural born” requirement as “the son of an American citizen born abroad.” Without so stating, Cruz was referencing the 1790 Naturalization Act, which declared, “And the children of citizens of the United States that may be born beyond Sea, or out of the limits of the United States, shall be considered as natural born Citizens:  Provided, that the right of citizenship shall not descend to persons whose fathers have never been resident in the United States:  Provided also, that no person heretofore proscribed by any States, shall be admitted a citizen as aforesaid, except by an Act of the Legislature of the State in which such person was proscribed.”

However, Cruz did not divulge that the Act was repealed and replaced with the 1795 Naturalization Act, which removed the “natural born citizens” reference.

On August 18, 2013, The Dallas Morning News reported that Cruz was born a citizen of both Canada and the United States in a headline which read, “Dual citizenship may pose problem if Ted Cruz seeks presidency.” Interestingly, the URL appears as “http://www.dallasnews.com/news/politics/headlines/20130818-ted-cruz-born-a-citizen-of-canada-under-the-countrys-immigration-rules.ece” which can occur if the title of the article is changed after publication.

When contacted for comment later that day, Cruz’s Senate office stated that “to the best of our knowledge, he never had Canadian citizenship.”  However, the following day, Cruz vowed to renounce his foreign status immediately, although the process ultimately lasted approximately ten months.

It is believed that the “natural born Citizen” clause was added to Article II during the 1787 Constitutional Convention in Philadelphia so as to prevent “foreign influence” from entering the office of the nation’s chief executive and commander of its military forces. In a letter to George Washington dated July 25, 1787, Founding Father John Jay wrote, “Permit me to hint, whether it would not be wise & seasonable to provide a strong check to the admission of Foreigners into the administration of our national Government; and to declare expresly that the Command in chief of the american army shall not be given to, nor devolve on, any but a natural born Citizen.”

On Wednesday evening, The Post & Email received a tip from a highly credible source that Cruz’s mother, née Eleanor Darragh, renounced her U.S. citizenship at some point while she was in Canada, roughly between December 1967, as reported by Breitbart via the Cruz campaign, and early 1975.  The source stated that it is as yet unclear whether she renounced U.S. citizenship before or after her son Ted was born in Calgary on December 22, 1970.

On Ted Cruz’s Canadian birth certificate, his mother is shown as “Eleanor Elizabeth Wilson” and his father as Rafael Bienvenido Cruz, which, our source suggested, indicates that they were unmarried when Ted was born. 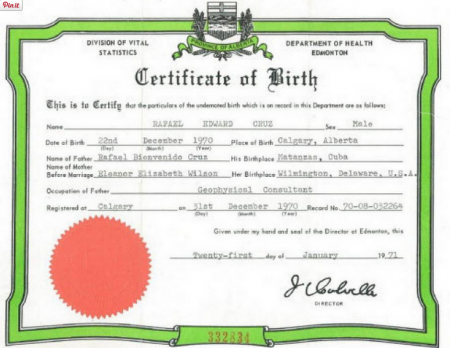 The source also told The Post & Email that “There is possibly evidence or lack of evidence in Canada of an actual marriage at the time of Ted Cruz’s birth and the strong possibility that there was a renunciation of citizenship” on Eleanor’s part.

Eleanor gave birth to another child in the United Kingdom in 1966 after divorcing her first husband, Alan Wilson.  The child tragically died at the age of five and one-half months after an illness.  An investigation conducted by a U.S. researcher and a British researcher last month demonstrated that the child’s last name was given as “Darragh” on his birth certificate but as “Wilson” on his death certificate.

At some point afterward, Eleanor returned to the United States, settling and working in Louisiana, where Rafael B. Cruz resided.

When Eleanor and Rafael Bienvenido Cruz left Louisiana for Alberta in late 1967, Rafael was still married to Julia Ann Garza, with whom he had had two daughters. Divorce papers between Garza and Cruz obtained by The Post & Email from a citizen researcher indicate that Cruz had abandoned Garza in March 1967 and not returned.

Cruz and Garza’s divorce was finalized by court order on September 20, 1968.

While Ted Cruz’s father was a very vocal surrogate on his son’s presidential campaign trail, Eleanor made just one public appearance during which she said virtually nothing.  She has provided no media interviews.

Divorce documents obtained by The Post & Email from the Harris County, TX court between “Eleanor E. Cruz” and “Rafael B. Cruz” state that the couple was married on March 14, 1969 at an unstated location.  According to the Jamaica Observer last year, Cruz’s parents were married in Canada.

According to Ted Cruz’s biography as related by The Christian Post the day after he declared his presidential candidacy:

At age three Cruz’ father, Rafael Cruz, abandoned him and his mother. While his parents were separated, a colleague invited Rafael to a Bible study at Clay Road Baptist Church in Houston, Texas. “There my father gave his life to Jesus Christ,” Cruz recounted. “God transformed his heart. And he drove to the airport, bought a plan ticket and he flew back to be with my mother.”

Unashamed of his born-again background, Cruz continued, “There are people who wonder if faith is real. I can tell you, in my family, there is not a second of doubt. For were it not for the transformative love of Jesus Christ, I would have been raised by a single mother without a father in the household.”

In January, CNN reported that Ted was four when his father left for Houston.

The Washington Post reported Ted Cruz’s mother’s name as “Eleanor Darragh” while she assisted in operating the seismic data-processing company Rafael B. Cruz founded in support of the Alberta oil industry.

In a 2013 interview between Rafael B. Cruz and NPR, Cruz said he became a Canadian citizen but did not state the year, although Macleans of Canada has reported it as 1973.  Naturalization records are not released to the public without a signed privacy waiver.

The Post & Email has attempted unsuccessfully to reach Rafael B. Cruz, the Cruz presidential campaign, and to obtain documentation from the U.S. government on Ted Cruz’s citizenship status.

Last November, Florida Rep. Alan Grayson, who is seeking former presidential candidate Marco Rubio’s U.S. Senate seat, announced that if Cruz became the Republican nominee, he would file “that beautiful lawsuit” challenging his constitutional eligibility due to his Canadian birthplace.

In January, Grayson went further and stated of Eleanor that “Cruz may have forfeited her U.S. citizenship by taking a Canadian oath of citizenship, and that he’s seen no evidence she actually was born in the U.S.”

In early February, after paying the required $25.00 fee and submitting a written request, The Post & Email received what was said to be a certified copy of Eleanor Darragh’s birth certificate from Delaware which showed that she was born on November 23, 1934 in Wilmington.

Article I, Section 3, clause 3 of the Constitution requires that candidates for the U.S. Senate must be at least 30 years of age and have “been nine years a citizen of the United States.”  They must also reside in the state from which they seek office.

As The Post & Email reported on Saturday, U.S. citizenship can be passed from one U.S.-citizen parent to a child born abroad, although unmarried parents brings with it additional considerations under current federal statute.

Ted Cruz Announces Run for Second Term in U.S. Senate, But Is He Eligible? added on Wednesday, May 11, 2016

4 Responses to "Ted Cruz Announces Run for Second Term in U.S. Senate, But Is He Eligible?"