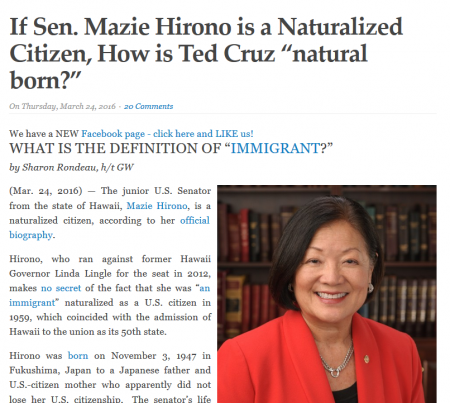 As it happens, both senators were re-elected to a second term in the 2018 midterm elections from their respective states.

Our article, published on March 24, 2016 and titled, “If Sen. Mazie Hirono is a Naturalized Citizen, How is Ted Cruz ‘natural born?’” was written during the height of the 2016 Republican presidential primaries wherein then-businessman Donald Trump and Cruz sparred bitterly for the nomination.

Cruz noticeably did not endorse Trump at the party convention in July that year.  Rather, he said, voters should “vote their conscience up and down the ticket” in November.

On several occasions in 2016, Trump raised the question of Cruz’s constitutional eligibility to serve as president, were he to be nominated and elected, given his birth in Canada.  At one point, Cruz responded that because Trump’s mother was from Scotland,  there could be a question about Trump’s eligibility.

After The Dallas Morning News released in 2014 an image it said was a reproduction of Cruz’s Canadian birth certificate provided by Cruz himself, Cruz claimed to have been unaware that he possessed Canadian citizenship to that day.  Eight months later, he formally renounced it.

Born December 22, 1970 to a Cuban-citizen father and presumed American-citizen mother, Cruz was considered a Canadian citizen at birth.  The Morning News reported Cruz as having been born “an instant U.S. citizen” because of his mother’s U.S. citizenship.  “But under Canadian law, he also became a citizen of that country the moment he was born,” the article continued.

Cruz’s father, Rafael Bienvenido Cruz, was a refugee from Cuba when he arrived in the U.S. during the Castro revolution which overthrew Fulgencio Batista.  The elder Cruz was said to have taken Canadian citizenship while he and his wife resided in Calgary working in the oil industry.

Neither the U.S. government nor Canadian government will release citizenship documents, citing “privacy” concerns, even for a public figure.

At a March 2016 rally, Trump said of Cruz, “He was born in Canada, lived there for four years. He was a citizen of Canada 15 or 16 months ago…Can you believe it?  He became a United States Senator, and then he said, ‘I didn’t know I was a citizen of Canada;’ lyin’ Ted, lyin’ Ted. He didn’t know. He was a joint [citizen]; he was U.S. and he was Canada. And, you know, that’s not the way it’s supposed to work; you’re supposed to be born, like here, here, here…”

Just after the 2016 Republican primaries concluded with Trump the victor, The Post & Email was told by a reliable source that Eleanor Darragh Cruz also became a Canadian citizen while residing there, although the year of her alleged change in citizenship was not available.

The “natural born Citizen” requirement contained in Article II, Section 1, clause 5 of the Constitution for the presidency became front-and-center for a number of Americans in 2007 after a little-known, first-term U.S. senator from Illinois, Barack Hussein Obama, declared himself a presidential candidate amid credible reports that he was born in Indonesia or Kenya.  As Obama’s campaign progressed, The Honolulu Advertiser amended an article it published in 2006 stating that Obama’s birthplace was Indonesia, claiming an error generated by a hasty internet search; and NPR altered an article in which it reported Obama’s birthplace as the East African country of Kenya.

In June 2004, the AP, whose article was reproduced in the Kenyan “Sunday Standard,” reported Obama as “Kenyan-born” as he ran for U.S. Senate against Republican Jack Ryan.

In addition to questions about his birthplace, Obama claims a father who was never a U.S. citizen. Entries in the Congressional Globe, precursor to the Congressional Record, indicate that members of Congress believed a “natural born Citizen” was one born in the United States to U.S.-citizen parents.

In 2011, Trump demanded that Obama prove his eligibility, and several months later, the White House released what it said was a scan of a certified copy of his original birth certificate from Hawaii.  Less than a year later, a six-month criminal probe declared the image a “computer-generated forgery.”

Other aspects of Obama’s purported life story are inconsistent and remain unexplained.  In a 2008 interview, former New Mexico Governor Bill Richardson described Obama as “an immigrant” who would advocate for newcomers to the U.S.

Some say that a simple birth on U.S. soil is enough to confer not only U.S. citizenship, but also “natural born” status.  However, others label a child born on U.S. soil to two alien parents an “anchor baby” whose U.S. citizenship is erroneously bestowed by a misreading of the 14th Amendment.

Hirono, 71, was born to a U.S.-citizen mother and Japanese father in Japan.  She describes herself as “an immigrant” to the United States whose background made her an “unlikely” candidate for the U.S. Senate.  Hirono previously served as Hawaii’s lieutenant governor; as a Hawaii state representative for a decade; and three terms in the U.S. House of Representatives.

With a U.S.-citizen parent, a foreign-citizen parent and a birth on foreign soil, Hirono is reportedly a naturalized U.S. citizen, raising the question as to why and how Cruz could be considered a “natural born Citizen,” as he claimed during the presidential race.

Cruz’s presidential campaign declined to respond to The Post & Email’s request, sent by certified mail just after Cruz declared himself a candidate in March 2015, that he release documentation proving he met the eligibility criteria for the presidency.  He was previously called upon to expose Obama as ineligible for the presidency, a request he ignored.

In the waning days of the Republican primaries, Cruz’s wife Heidi characterized her husband as “an immigrant.” On April 11, 2016 NBC News’s Pete Williams reported Cruz to have been “naturalized.”

A requirement to serve in Congress is for the candidate to be a “citizen of the United States,” which includes naturalized citizens provided they meet the seven- or nine-year residency requirement.  However, it is almost universally understood that a “naturalized” citizen is not “natural born.”

Despite numerous open-records requests sent to the State of Texas, where Cruz was admitted to the State Bar and served as Solicitor General, The Post & Email was unable to acquire documentation containing any questions about citizenship to an applicant for the public-service positions Cruz held.