We continue to await receipt of responsive documents to a third, outstanding request filed with the U.S. Department of Justice last April for documents bearing Cruz’s signature while he served as assistant deputy attorney general between 2001 in 2003.

The two new requests, one filed on Thursday with the Justice Department and the other on Monday with the Canadian government, have each received an acknowledgment from the respective government agencies involved. We asked Justice for a copy of the “SF 171” form which Cruz might have signed when first applying for employment with the federal government and which contains the question, “Are you a U.S. citizen?”

From Cruz’s release of his birth certificate in August 2013 to The Dallas Morning News showing that he was born in Canada, the publication deduced that Cruz was born a dual U.S.-Canadian citizen by virtue of his birth to a U.S.-citizen mother in Calgary, Alberta on December 22, 1970. Cruz’s father was a Cuban national who left the island in the prelude to the Cuban Revolution for the United States, which provided him legal residence and admission to the University of Texas.

When The Dallas Morning News reported in 2013 that Cruz was born with and currently held Canadian citizenship, his U.S. Senate office claimed that Cruz had no knowledge of it. Shortly thereafter, Cruz announced that he would renounce his Canadian citizenship, a process which did not appear to have been initiated until May 2014, nine months after the newspaper article was published.

Various Canadian citizenship attorneys had commented on the record that the renunciation process routinely takes approximately 30 days, with several ruminating as to why nine months ensued before Cruz took steps to do so.

A document posted online appears to be an official citizenship renunciation confirmation from the government of Canada bearing Cruz’s name.

When a Canadian citizen applies to renounce his citizenship, the document he is asked to complete and sign asks whether or not he has, or will soon have, citizenship in another country so as to prevent statelessness.  Each situation requires the applicant to “attach proof.”

According to the Government of Canada’s website, in order to renounce Canadian citizenship, one must:

There is an option to renounce Canadian citizenship “urgently.” 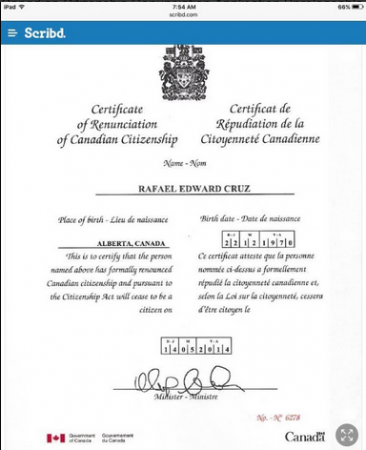 Despite his birth in Canada to a Cuban-citizen father who later became a Canadian citizen, Cruz claims that he is a “natural born Citizen” of the United States and therefore qualifies to serve as president and commander-in-chief as required by Article II, Section 1, clause 5 of the U.S. Constitution. Several lawsuits claiming that Cruz is ineligible to hold the position remain active in this year’s presidential election cycle.

It is believed by many constitutional scholars that the Framers were wary of foreign influence in the nation’s chief executive, as evidenced by a letter written by Founding Father John Jay to George Washington on July 25, 1787, in which he wrote:

At least two lawsuits and several primary ballot challenges claimed that Cruz, Senator Marco Rubio, and former Louisiana Governor Bobby Jindal are ineligible to serve as president for failure to meet the “natural born Citizen” requirement. As of Tuesday evening, Rubio suspended his campaign after a poor showing in the presidential primary in his home state of Florida, and Jindal suspended his campaign in November.

The Post & Email has additionally written to Texas Gov. Greg Abbott, who endorsed Cruz along with former Texas Gov. Rick Perry, asking for any documentation held by the state’s executive branch which might indicate that Cruz affirmed U.S. citizenship at any time.  Cruz served as Texas solicitor general from 2003 to 2008, but a public information request fulfilled to this publication over a year ago revealed that the application forms Cruz completed did not ask about U.S. or any other citizenship.

In circumstances which some Americans find eerily reminiscent of those surrounding Barack Hussein Obama’s presidential run in 2008 and 2012 reelection campaign, Cruz has refused, despite written requests from this publication and possibly others, to release the following:

Harvard Law School and Princeton University, Cruz’s alma maters, have ignored The Post & Email’s written request for copies of his college applications. Harvard Law simultaneously did not respond to a request for Obama’s applications to the institution, from which he graduated in 1991.

On Sunday, Atty. Stephen Pidgeon of the North American Law Center (NALC) suggested on the organization’s weekly radio broadcast that Cruz’s mother became a Canadian citizen while living in Canada between 1968 and 1974.  The same was stated by Rep. Alan Grayson, who said he will file a “beautiful lawsuit” should Cruz win the Republican nomination in Cleveland in July.

The Cruz campaign and Cruz himself have denied that his mother ever assumed Canadian citizenship.  Canadian naturalization records are not publicly releasable without the subject individual’s written consent.

While Obama claims a birth in Honolulu, HI on August 4, 1961, his “long-form” birth certificate posted on the White House website on April 27, 2011 has been found by a criminal investigative team to be a “computer-generated forgery.” No one has made such a claim in regard to Cruz’s Canadian birth certificate.

On Monday morning, The Post & Email asked the government of Canada if it could release by law the application forms Cruz completed and signed to renounce his Canadian citizenship. We received a response on Tuesday morning from the Government of Canada’s Media Relations department, which reads as follows: