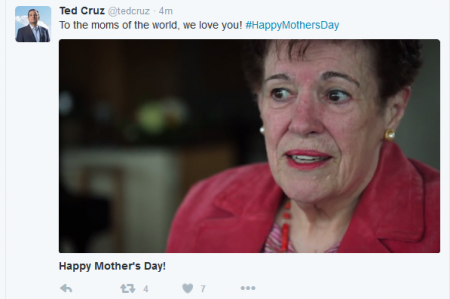 (May 8, 2016) — On Twitter on Sunday, former 2016 presidential Republican candidate Ted Cruz tweeted a four-minute video featuring his mother, Eleanor Darragh, and his wife Heidi, as a tribute on Mothers’ Day.

After months of receiving questions from voters about his parents’  backgrounds, careers, and citizenship, then suspending his campaign last Tuesday after Donald Trump excelled in the Indiana primary, Cruz provided a glimpse of his mother’s life as having been the first child of 17 siblings to go to college.

Eleanor Darragh was raised in Wilmington, DE “in a working-class family.”  Following her graduation from Rice University in Houston, she lived in England, Louisiana, Canada, and Texas.

While working in computer programming in Canada with her second husband, Ted’s father, Eleanor gave birth to Ted on December 22, 1970 in Calgary, Alberta.

Many have questioned whether or not Cruz is a “natural born Citizen,” as is required by Article II, Section 1, clause 5 of the U.S. Constitution because of his birth outside the United States.  Some legal scholars do not see his foreign birth as a barrier because of his U.S.-citizen mother, while others preclude him from serving because of it.

“He had his nose in everything,” Eleanor says of her son, who graduated from Princeton University and Harvard Law School, served as Texas Solicitor General from 2003 to 2008, and was elected to the U.S. Senate in 2012.

Eleanor stated that her mother had wanted her to be able to obtain more education than she had, which Eleanor said was the tenth grade.  Cruz then described his mother’s father as “difficult” and believing that college was unnecessary.

Of his mother’s career, Cruz said, “She ended up getting a job at Shell as a computer programmer…talk about two industries – oil and gas and computer science –  neither one of them was very welcoming to women, and it’s one of the things I’ve always admired about her.”

With the camera switching back and forth, Eleanor is then pictured saying that she prays for her son’s “safety.”  “He was always an overachiever, but this is somewhat beyond that,” Eleanor said, although not specifying what “this” is.

“I always knew I was loved,” Cruz said, referring to his youth, and that he considered his mother “a confidante.”

To this writer’s knowledge, Eleanor appeared once with her son on the campaign trail but said very little, and has provided no formal interviews.  She tragically lost her first son, Michael, at the age of five months while living in the UK.

Eleanor and Cruz’s father, Rafael Bienvenido Cruz, were married in March 1969, reportedly in Canada, and divorced in February 1997 through the Harris County, TX court.

The video then turns to Heidi Cruz as the mother of the couple’s two young girls.  Heidi states that mothering is “multi-faceted” and that “the love of a mother sticks with them their whole life…”

Cruz, his wife and mother are then pictured together, and a photo of Cruz’s family on the wall is captured.  Cruz then expresses his gratitude for mothers for “helping us capture the future.”

“To the moms of the world, we love you,” Cruz said to conclude.

Update:  The Post & Email has found that the video discussed in this article was released in 2015.

On Mothers’ Day, Ted Cruz Opens Up About His Mother added on Sunday, May 8, 2016

4 Responses to "On Mothers’ Day, Ted Cruz Opens Up About His Mother"