“HE WAS BORN IN CANADA” 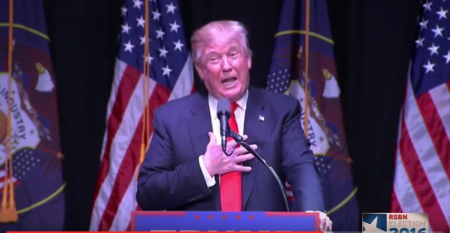 “He’s got a lot of problems,” Trump told his audience, after saying that Cruz arrives at his rallies “Bible high,” then starts “lyin’.”

Over the last few months, Trump has referred to Cruz as “Lyin’ Ted.”  Through the Republican primary season, which launched February 1 in Iowa, Trump has led Cruz in delegate counts, with the current numbers reported as 673 for Trump and 410 for Cruz.

“He was born in Canada, lived there for four years.  He was a citizen of Canada 15 or 16 months ago…Can you believe it?” Trump said.  “He became a United States Senator, and then he said, ‘I didn’t know I was a citizen of Canada;’ lyin’ Ted, lyin’ Ted.  He didn’t know.  He was a joint [citizen]; he was U.S. and he was Canada.  And, you know, that’s not the way it’s supposed to work; you’re supposed to be born, like here, here, here…”

Trump was born in New York City on June 14, 1946 to two U.S.-citizen parents.  His mother, who immigrated from Scotland, became a U.S. citizen in 1942. Trump’s father, Frederick Trump, was born in the Bronx, a New York City borough, to German immigrant parents, becoming involved in residential real estate before he reached the age of majority, at that time 21.

Trump’s words mirrored a discussion which took place on the WheresObamasBirthCertificate.com (WOBC) radio show on Friday night wherein this writer, columnist and North American Law Center (NALC) co-founder JB Williams, and host Gary Wilmott remarked on the dearth of documentation on Cruz showing that he is even a basic U.S. citizen, irrespective of the higher standard of “natural born Citizen” required by Article II, Section 1, clause 5 of the U.S. Constitution for the president and commander-in-chief.

During the 9:00 p.m. EDT hour of the show, this writer detailed some of the Freedom of Information Act (FOIA) requests made by The Post & Email to various government agencies of both the U.S. and Canada requesting documentation on Cruz and his parents, the latter concerning if and when either or both parents became Canadian citizens.

It is widely-reported, including by the elder Cruz himself, that he became a Canadian citizen; Macleans of Canada reports the year as 1973.

It is established fact that Ted Cruz was born in Calgary, Alberta, Canada on December 22, 1970 and was a Canadian citizen through June 2014, when his application to renounce that citizenship was finalized from the month prior.

When The Dallas Morning News reported on August 18, 2013 that Cruz was born a “dual citizen” of the U.S. and Canada because of his U.S.-citizen mother, Cruz’s spokeswoman, Catherine Frazier, claimed that “To our knowledge, he never had Canadian citizenship.”

Macleans reported that Cruz began the renunciation of his Canadian citizenship “swiftly” after publication of The Dallas Morning News’s August 2013 article revealing it, although the application was reportedly submitted on May 14, 2014, some nine months later.

Both Williams and this writer commented on Friday’s radio presentation that Cruz ran for the U.S. Senate in Texas without informing the electorate that he was at best a dual citizen of the U.S. and Canada.  Wilmott added that he is acquainted with at least one Texas voter who stated that had she known Cruz possessed foreign citizenship at the time he sought the seat, she would not have voted for him.

On Tuesday, the Government of Canada confirmed that Canadian naturalization records are not releasable to the public without a signed consent from the subject individual.

One of the contentions discussed on the last night’s show was that the American people have been barred from accessing documentation about presidential candidates and candidates often are unwilling to release it on their own. To date, Cruz has released nothing showing that he has lived his life as a U.S. citizen.

Democrat presidential candidate Bernie Sanders has likewise disregarded two requests from The Post & Email, the second of which was sent by certified mail with the receipt returned, for his “long-form” birth certificate and father’s naturalization record.

In an open attempt to deny Trump the Republican nomination at the convention in July, former presidential candidate Mitt Romney, who Donald Trump endorsed in 2012, has campaigned with Trump’s rivals in recent weeks after giving a speech at the University of Utah on February 24 denouncing Trump as “a fraud” and possessing temperament unfit for the presidency.  In the days leading up to his speech, Romney led the call for Trump to release his tax returns to show that he was not “hiding” anything.

Trump responded at the February 25 Republican debate that his returns are under audit by the IRS, which he said is done nearly every year, precluding their release now.  However, he added that when the audit is complete, he will release all of the tax returns involved.

NBC News reported that the IRS responded to Trump’s statements with:

The IRS stresses that audits of tax returns are based on the information contained on the taxpayer’s return and the underlying tax law – nothing else. The audit process is handled by career, non-partisan civil servants, and we have processes in place to safeguard the exam process.

In May 2013, former IRS supervisor Lois Lerner admitted that the agency had targeted “conservative” applicants for tax-exempt status by unreasonably delaying their applications.  Many in political life reported having been audited for the first time in their lives, with former presidential candidate Dr. Ben Carson, who had vocally opposed Obama’s health care law known as “Obamacare” at the National Prayer Breakfast in February of that year, among those audited.

A complete video of the Salt Lake City rally can be viewed here; Trump’s remarks about Cruz’s former Canadian citizenship begin at 1:23:00.

Also on Friday evening, Romney announced that he will be casting his Utah caucus vote for Cruz.

Last month, Trump hinted that he might file a legal challenge to Cruz on the premise that he is not constitutionally qualified to seek the presidency.

In 2011, Trump challenged Barack Hussein Obama’s “natural born” status by demanding that he release his “long-form” birth certificate to the public, something the Obama campaign had failed to do.  Obama claimed a birth in Honolulu, Hawaii on August 4, 1961 to a U.S.-citizen mother and British-citizen father.

On April 27, 2011, the White House released what it said was a scan of a certified copy of Obama’s original birth certificate held by the Hawaii Department of Health. However, within 48 hours, the image was denounced as a poor forgery by several experts.

A criminal investigation spanning more than four years conducted by the Maricopa County Cold Case Posse determined that the long-form birth certificate image, along with Obama’s purported Selective Service registration form, is a “computer-generated forgery.”  No one in Congress has taken action on the findings.

When asked by The Post & Email to release the email from Vietor last year, an associate of Hollyfield claimed that the Tampa Bay Times had changed email platforms and no longer retained it.

4 Responses to "Trump on Cruz: “Is He Really a natural born Citizen?”"