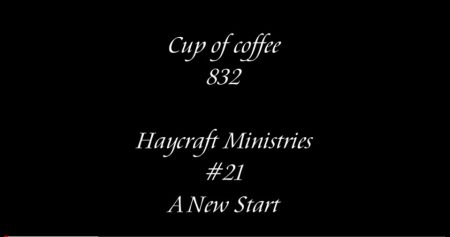 (Jan. 7, 2020) — A video released on New Year’s Day by Haycraft Ministries depicts Beth Haycraft and her husband Michael discussing the events of the day, including in their home state of Virginia, where Michael Haycraft now resides with his wife after spending five years in the custody of the Tennessee Department of Correction (TDOC).

During his incarceration, Mrs. Haycraft was a relentless advocate for her husband, who suffers from mental illness with three different diagnoses. As a non-violent convicted offender, Mrs. Haycraft believed her husband was often placed in danger and maintained that without proper intervention, his mental-health issues would only worsen over time.

The video begins with the two engaging in light conversation about the camera, the light, and whether or not Michael would “keep the shades on” as she enjoyed a “cold cup of coffee.”

At 1:47, Beth wishes the viewers a “wonderful new year” and said that “2019 had a lot of challenges.”  To that, Michael added, “The last six years has been horrific. It’s been very challenging; it put both of us to the ultimate test, make us decide whether we’re going to serve God or continue doing the same thing we’ve been doing, and the things we’ve been doing isn’t working…”

Beth said that more “cup-of-coffee” videos are planned for this year and that she uses the theme as a “coping skill.” “Each day it helps me to look for something either funny or pretty or even kind-of warped; I do ‘warped’ real well,” Mrs. Haycraft said jocosely.  She thanked viewers for their prayers while she was awaiting Michael’s release and asked that they keep in their prayers those unable to be home:  “those that are incarcerated, those that are hospitalized, those that are in the military…”

Mrs. Haycraft had indicated to The Post & Email over the summer that plans had been initiated to grant her husband the parole he was denied in 2018 and to return him to Virginia via an “interstate compact” arrangement.  In an email on Monday, Mrs. Haycraft told us of her husband, “He appears to be more content and happy than I have ever known him. He now has the coping skills to assist him that he did not have prior to incarceration. We would like to thank Ms. Amy (I believe her last name is Thurman, but will have to verify that; will get back to you with the verification) who works as a counselor in the TComm program at Bledsoe Co. Correctional Complex; she is a great asset to the program. We had very few complaints about BCCX as opposed to the many complaints about other facilities.”

TComm is the class Michael was required to complete before being granted parole.  BCCX serves as the intake facility for all Tennessee male inmates upon their arrival to prison.

Beth confirmed Tuesday that the counselor’s last name is “Thurman.”

They are making monthly payments to the court of conviction, Mrs. Haycraft said, in apparent keeping with Tennessee laws on which we reported last month after an inmate made us aware of them.

As for improvements she believes could be made in the incarceration of non-violent individuals, Mrs. Haycraft said, “Our nation is in dire need of alternative sentencing. There is no excuse for housing violent offenders with non-violent ones. There is no excuse to expose persons who do not have communicable diseases to those who do, such as Hep. C.

“For those who insist on making a profit from the misery of others, why not build alternative treatment facilities? One can still have a closed security facility that will need to be staffed, but that addresses the needs of the individuals be those needs mental or substance abuse related. It would also be great community relations on the part of elected officials who have been so calloused for decades to these needs. Those elected need to realize that even though those labeled ‘felon’ may lose the right to vote, which is wrong on many levels, there are many others connected to that individual who still have the ability to vote.”