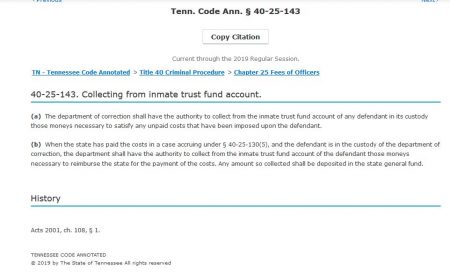 (Dec. 14, 2019) — The Post & Email recently received a mailing from TDOC inmate Michael Stitts, #213173, informing us of a statute of which we had been previously unaware which allows the TDOC to collect court costs on behalf of the State of Tennessee.

The assessed fees are garnished, if available, from inmate trust accounts and reportedly deposited in the state’s “general fund” as a result of the state having reimbursed the court costs to each case’s county of origin.

Although we have reported on Tennessee’s prison system for five years and corruption there in general for ten, no inmate or family member had ever mentioned the law or its effects on them until Stitts’ letter and enclosures arrived.

In Tennessee criminal code, there are two statutes dealing with who is “liable” for court costs resulting from a criminal case. TCA 40-143-30 states that if a defendant is acquitted or a case dropped by the prosecution, the accused is not obligated to pay the costs.  The state additionally pays the costs if the defendant is deemed “indigent,” but only temporarily. 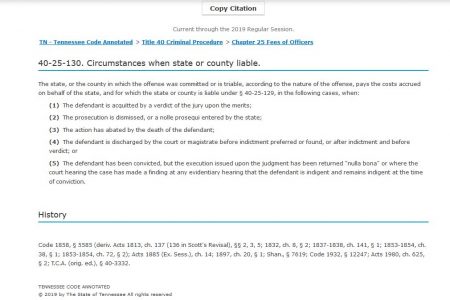 A second applicable statute states that “The Department of Corrections shall have the authority to collect from the inmate trust fund account of any defendant in its custody those moneys necessary to satisfy any unpaid costs that have been imposed upon the defendant” and “Any amount so collected shall be deposited in the state general fund.”

Stitts’ letter expressed surprise that he assessed fees for a misdemeanor conviction from 2015.  “TDOC hit about 50 of us, all at once,” he wrote in his letter.  “That’s just here at Northeast, and just this time.  Once or twice a year, they’re knocking us up for $50,000 of ‘old court costs.'” 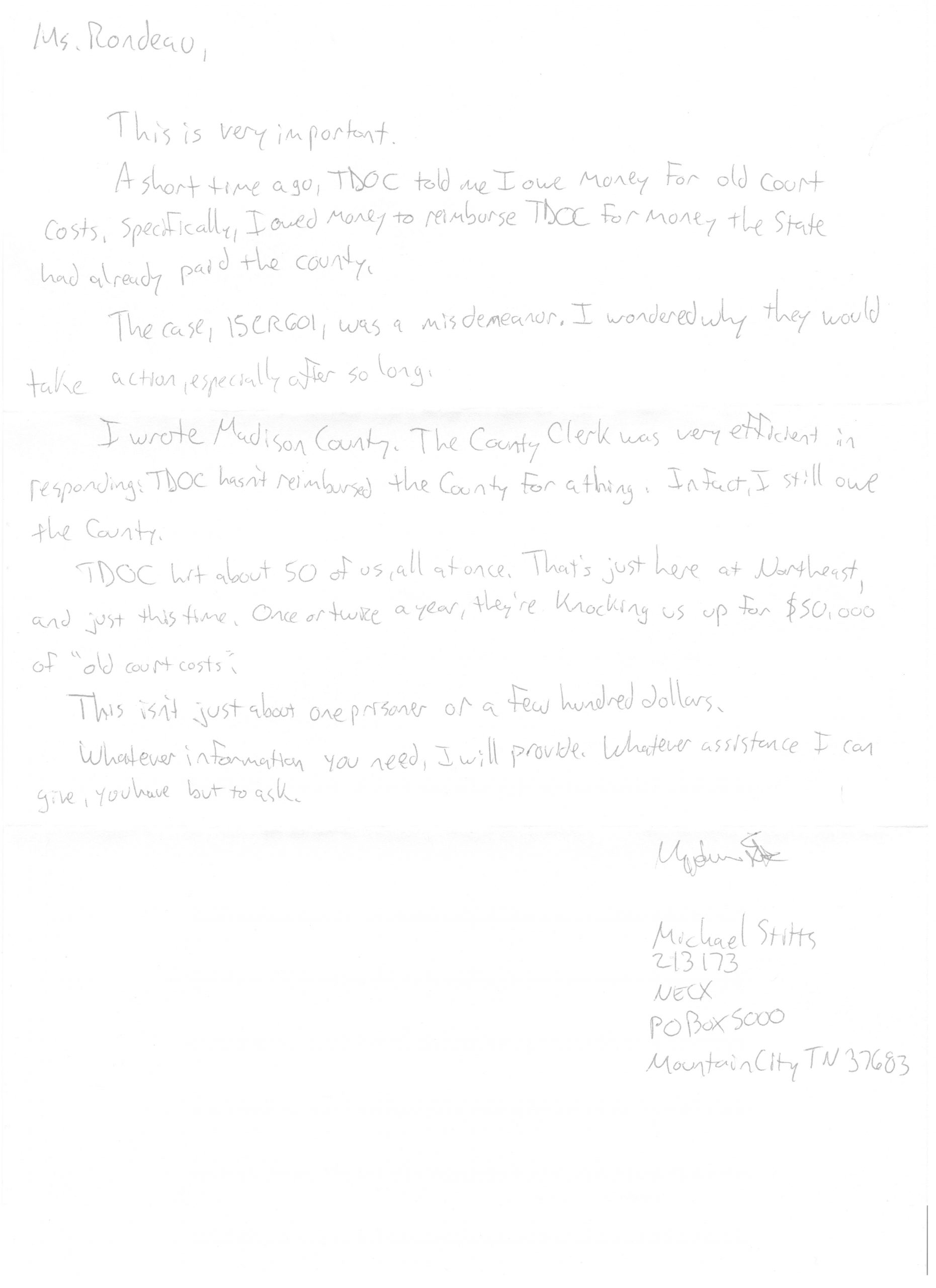 The accompanying enclosures assess over $5,000 in court costs and “restitution” as well as emphasize that “INDIGENCY DOES NOT WAIVE THESE FEES.”  Costs are noted as having accrued for “arrest,” a “jail building tax,” multiple “clerk fees,” and a “county litigation tax,” among others. 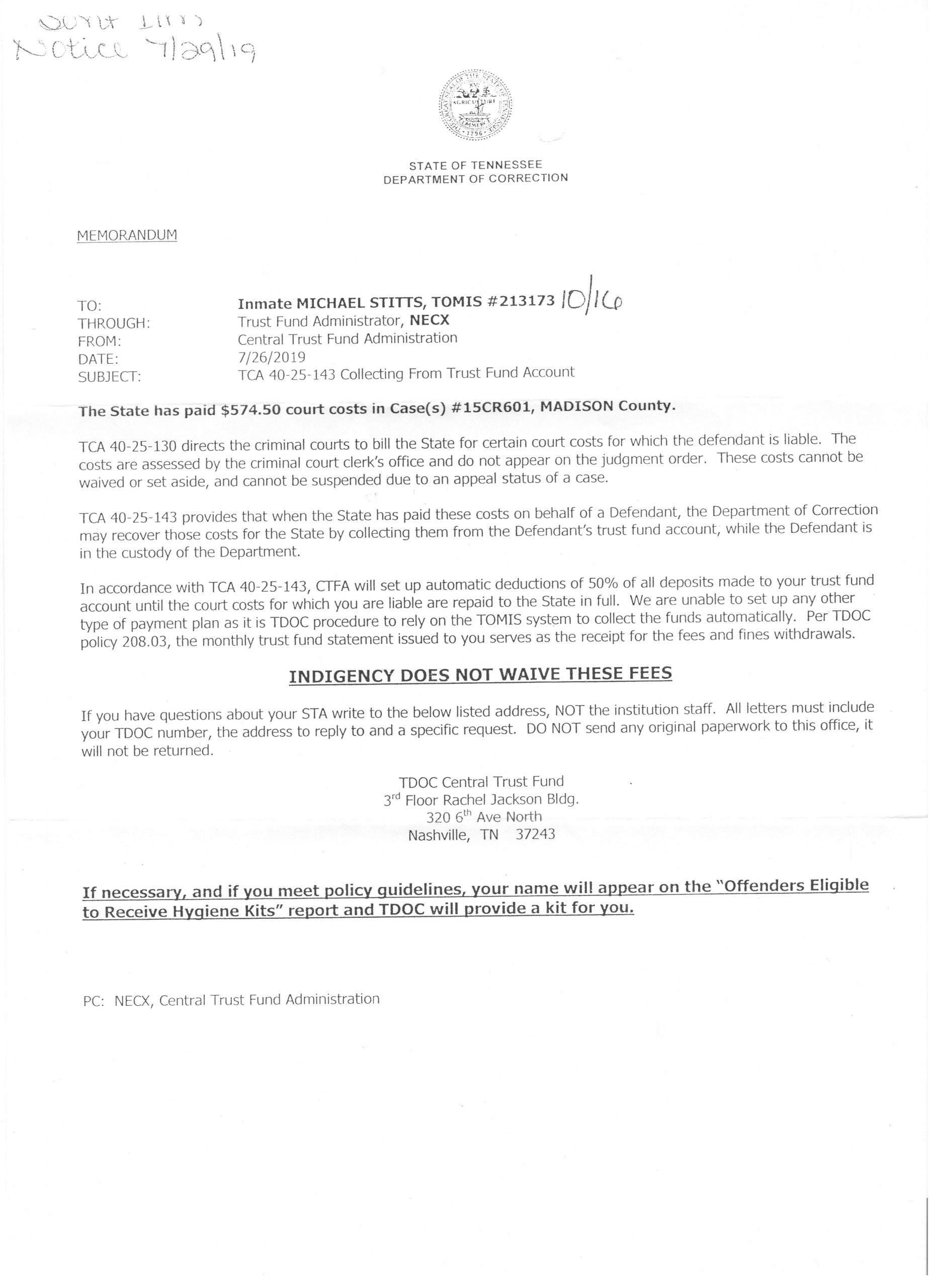 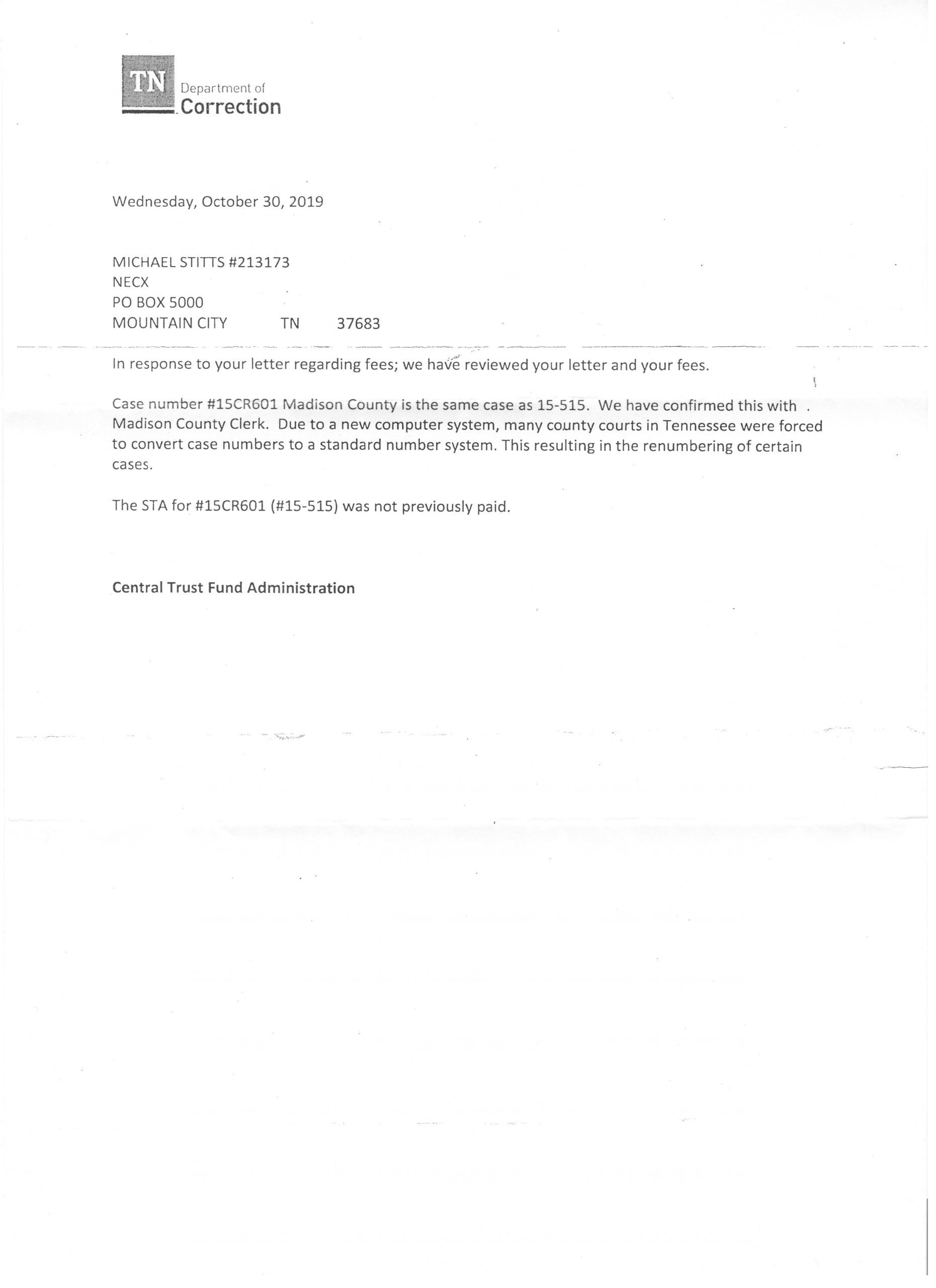 Family members also have the option to pay the fees. 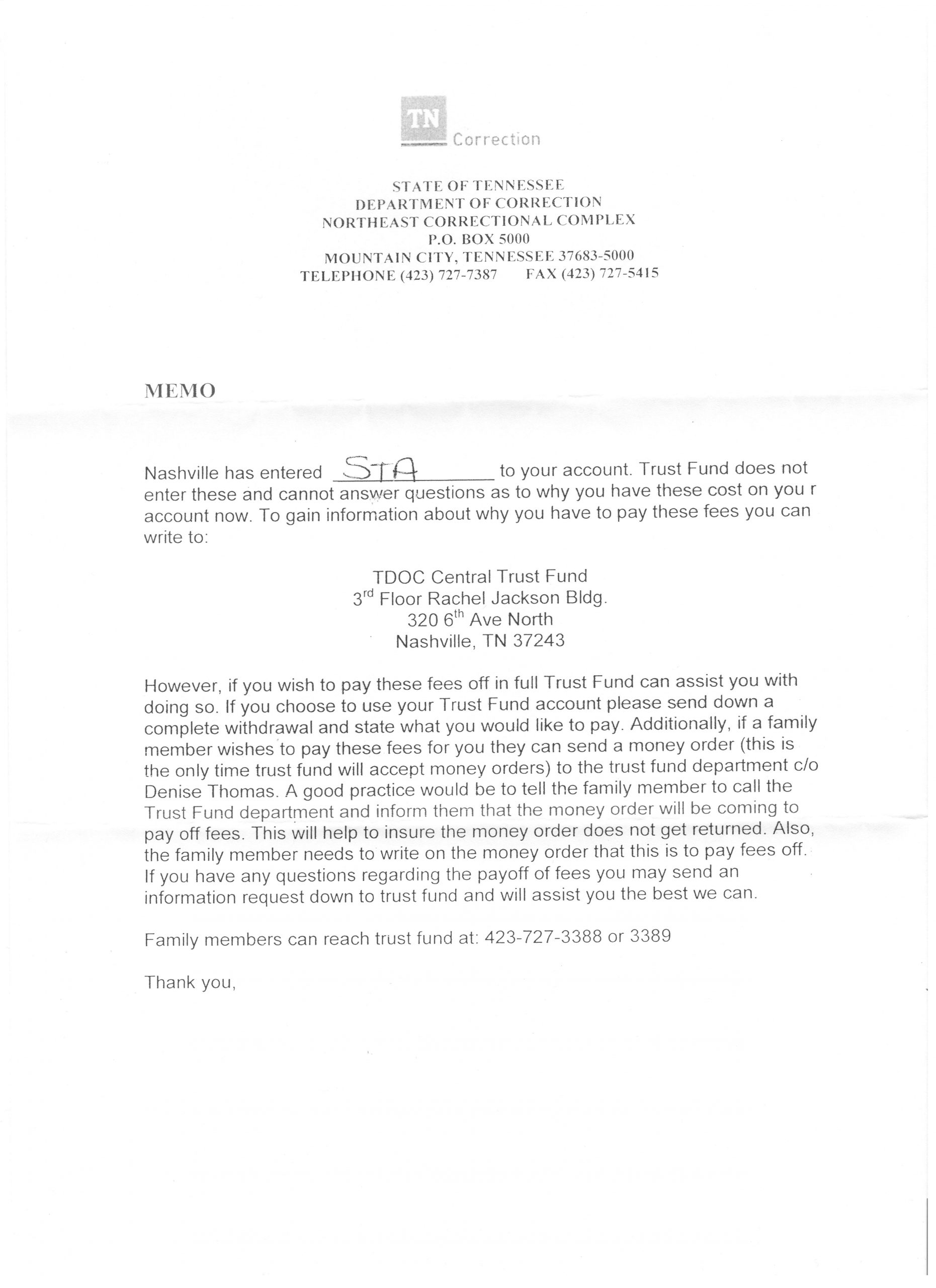 The “#15” referenced in the letter below indicates that the case originated in 2015. 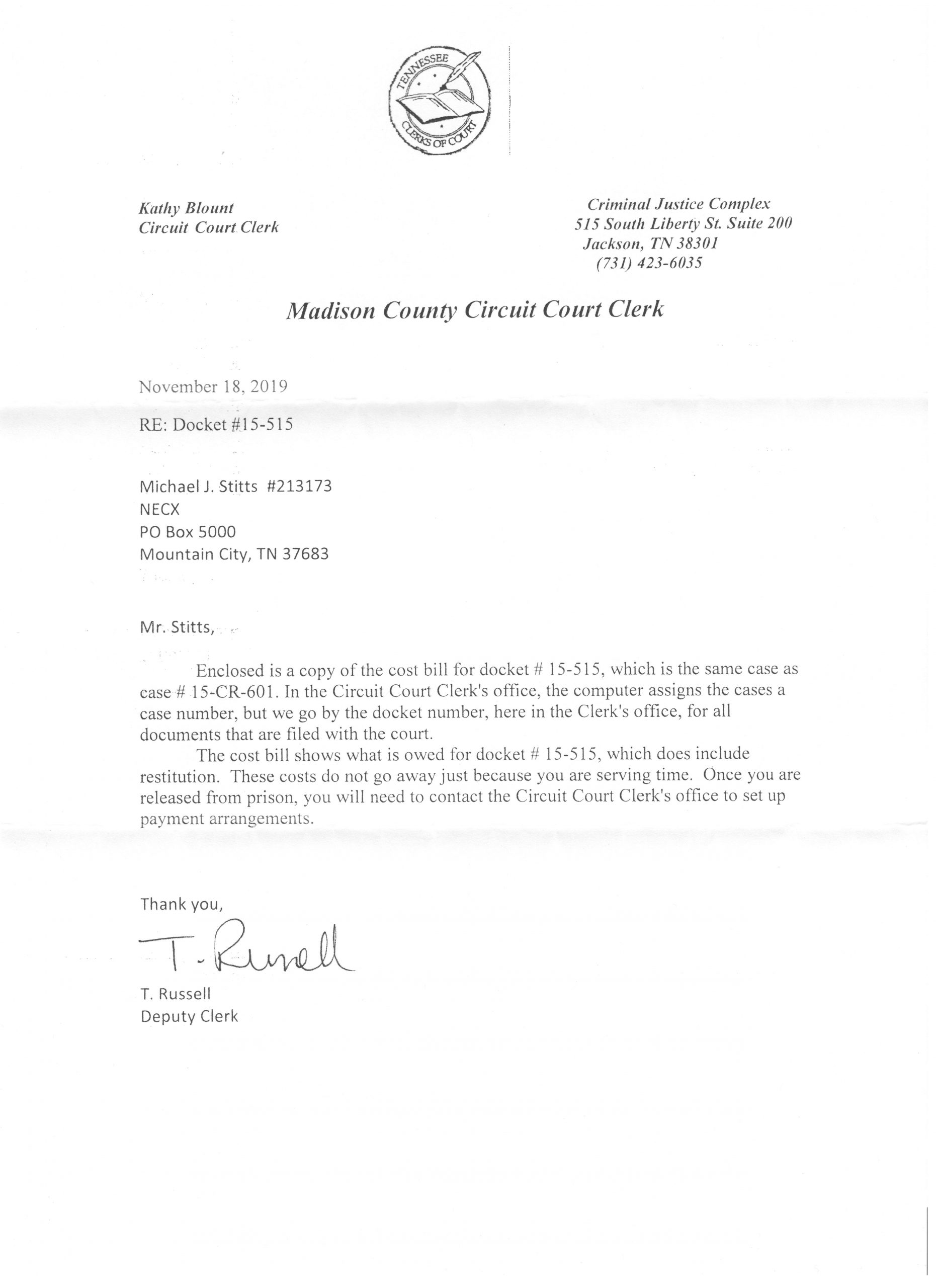 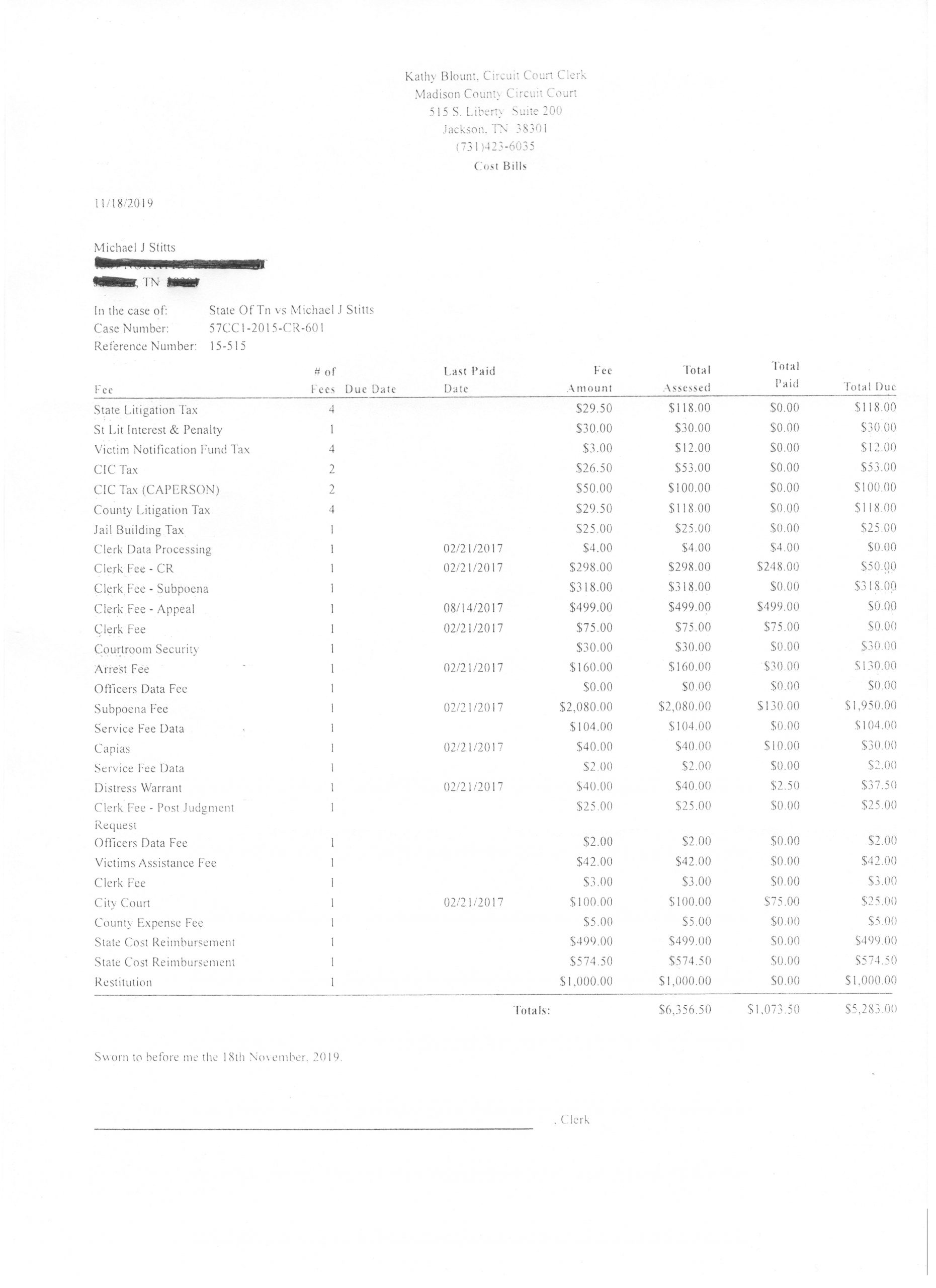 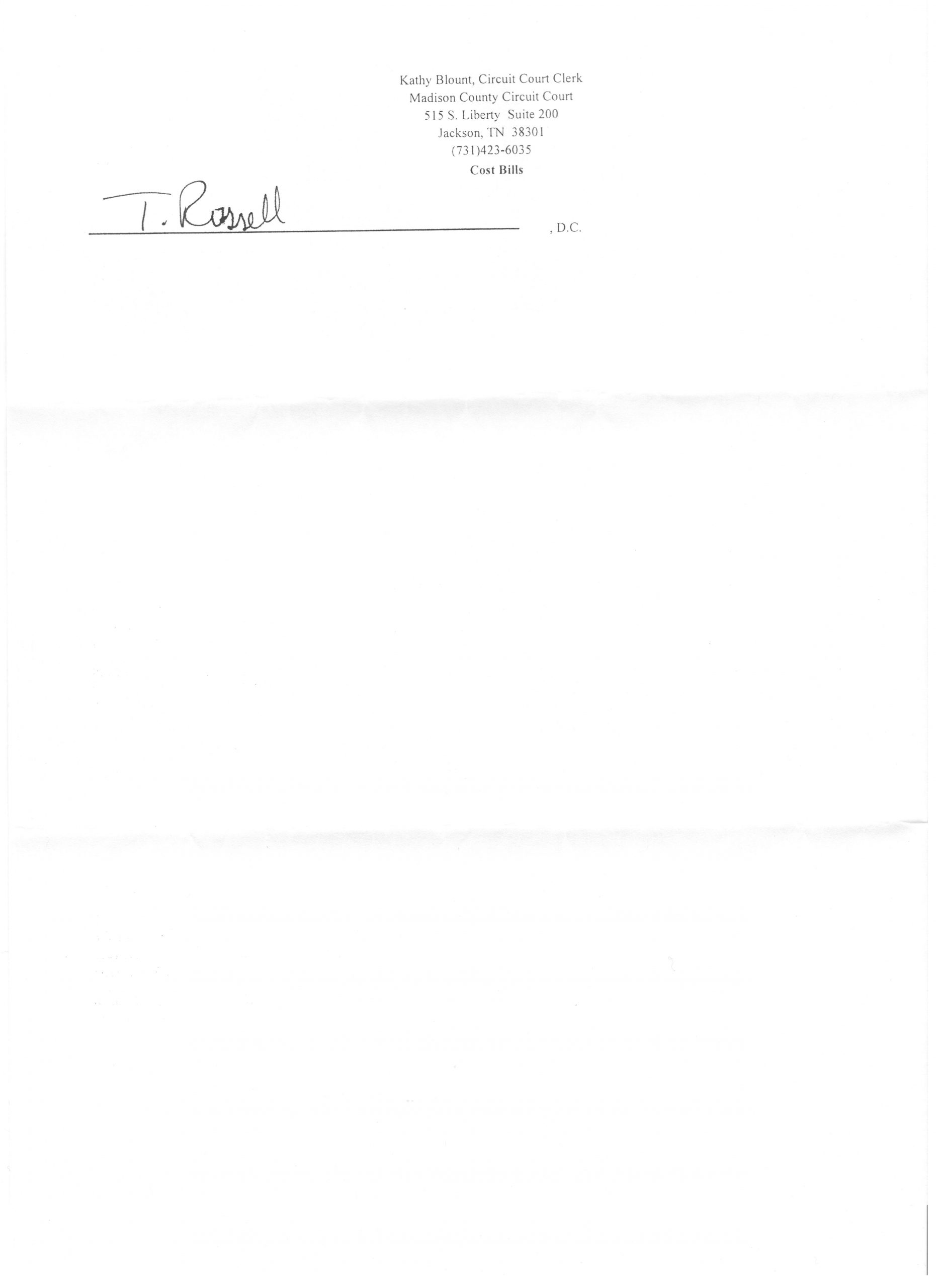 On Thursday evening The Post & Email contacted Robert A. Reburn, the TDOC spokesman for Eastern Tennessee, with questions about the process by which funds are garnished but as of press time received no response.

We did, however, contact and hear back from a former state inmate who confirmed that the above-cited laws were enforced against him, writing:

Yes this is absolutely true. after I had been in prison for about a year I got a notice that XXXXX county was going to start taking half of all of my deposits until it was paid. fortunately I was working in the wood plant at that time making minimum wage so I was able to pay it off fairly quickly, but for those making $0.17 an hour it can be a tremendous burden that last a long time. if I remember correctly I had to pay about $1,200. also you might know not only do they take your prison salary oh, they also take half of any money that your family sends in.

Since late 2009, The Post & Email has detailed corruption within Tennessee’s criminal court system through its hand-picked grand jury foremen, lack of vetting of jurors and due process to the defendant, and a set of laws passed in 1984 which ordered the county criminal courts to cease functioning independently and form “judicial districts” from which grand jurors and trial jurors would then be drawn. While the judicial districts were designated, each county in Tennessee continues to operate its own criminal court.

Do Tennesseans Know About This Law? added on Saturday, December 14, 2019

3 Responses to "Do Tennesseans Know About This Law?"