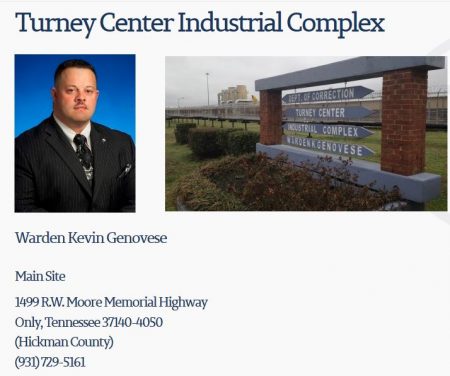 (Apr. 13, 2018) — At 6:15 a.m. EDT on Friday, the wife of mentally-ill TDOC inmate Michael Haycraft, #277811, received a phone call from her husband reporting that he is being relocated today, likely to the Turney Center Industrial Complex (TCIX), after six months in protective custody (PC) at the Morgan County Correctional Complex (MCCX).

Mr. Haycraft had been within two weeks of finishing the nine-month Therapeutic Community (TCom) program when he was charged with failing to participate in the class.  His infraction was reportedly being “out of place,” which his wife, Beth Haycraft, reported was used against him in a “Class A” disciplinary write-up.  He was then expelled from the class without having been assigned an inmate advocate to argue his case, Mrs. Haycraft reported.

She also said that her husband has earned a GED and successfully completed two other courses while incarcerated.

Mr. Haycraft suffers from three forms of mental illness and, as assessed by his wife, has been in a crisis mode for at least several months as a result of his having been placed in PC without proper mental-health support.

His placement there was deemed necessary after several gang members threatened him once it became known that he was expelled from the TCom program.

On April 10, a parole hearing was held for Haycraft which determined that he should spend at least another year in state prison as a result of the disciplinary write-up resulting from his alleged failure to complete TCom.

While Haycraft has requested a transfer out of MCCX, he expressed the desire to go to the Northeast Correctional Complex (NECX), which would have been much closer to his wife, who lives in Virginia.  Mrs. Haycraft told The Post & Email that when her husband was at NECX previously, he received mental-health support not available at the other prisons.

Prior to the Parole Board hearing, Mrs. Haycraft had expected that the decision would be unfavorable given that on March 18, her husband was notified that he was designated to participate in the TCom program at TCIX. “Due to him being presented with the information of his transfer 4/02/2018 and a parole hearing scheduled for 4/10/2018, one could assume his parole hearing will not go in his favor,” she wrote on April 3.  “One could also question as to why he is being transferred to a location that would be very difficult for his family to visit.”

Below is a letter submitted to the Parole Board in support of Haycraft’s release. The signatories, who Mrs. Haycraft said have known her husband well for a number of years, pledged a job to him upon his release. 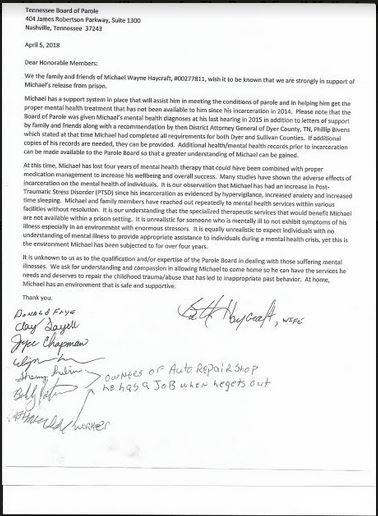 Mrs. Haycraft attended the Parole Board hearing on Tuesday, when she saw her husband for the first time since October 1 of last year. “At first, I didn’t recognize him and then my heart broken because he looked so different. Six months locked down 22-24 hours a day takes quite a toll on a human. He was so pale, so broken,” she wrote in a letter to a number of TDOC officials on April 11, the day after the hearing.

“If they are sending him to the Turney Center, that’s 6 1/2 hours from here.  They have an annex that supposedly has the TCom program and from my understanding, the program there is done correctly,” Mrs. Haycraft wrote in an email early on Friday morning.  “God is still god, all by Himself and scripture tells us that what is intended for evil, God intends for good.  Prayers are appreciated…”

TCIX is the institution where car keys belonging to a single mother who visited the prison with two young children last Thanksgiving Day were lost or purposely confiscated such that she was forced to spend more than $1,300 to transport her vehicle home and render it drivable.

The State of Tennessee has thus far refused to reimburse her for her expenses, receipts of which she provided in an initial complaint filed in late December.  Her appeal to the Tennessee Claims Commission, Middle District, is pending.

One Response to "Report: Inmate Michael Haycraft to be Relocated Friday"