HAVE JAILERS MADE HIM A “TARGET?” 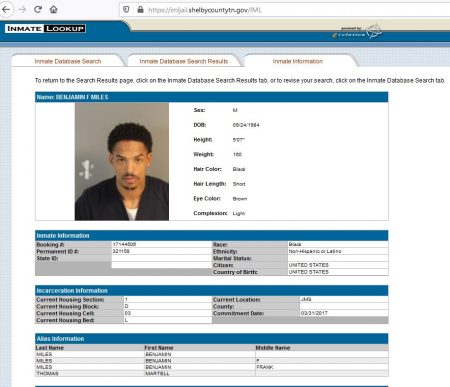 (Oct. 25, 2019) — A letter received last week from Shelby County, TN inmate Benjamin Miles dated October 9, 2019 expresses gratitude for The Post & Email’s response to an earlier letter in which Miles described a severe beating by correction officers and hospitalization of which he said his family was not informed.

“I want to thank you for the concern & the help you have provided for me,” the letter begins. “Since I have been here at the Shelby County jail, I have been a thorn in the side of misconduct in and outside this jail system. I have filed so many grievances, complaints to the Board of Professional Conduct [sic] (on my counsel & prosecution), to the Board of Judicial Conduct (on the judge) Internal Affairs, the T.B.I. & others…”

“T.B.I.” stands for the Tennessee Bureau of Investigation.

The Post & Email has a ten-year history of reporting on corruption within Tennessee’s judicial branch of government, beginning with criminal court judges’ handpicking of the grand jury foreman. In 2016, eyewitness Walter Francis Fitzpatrick, III reported that Shelby County utilizes not only a handpicked grand jury foreman, but also a “grand jury foreman pro tempore,” also chosen by the judge at whim.

Over the last three years, this publication has received scores of letters from Shelby County jail inmates, some of whom have filed federal lawsuits alleging unconstitutional, prolonged detention without trial, ineffective counsel, suppressed evidence, the use of “shock” handcuffs, and falsification of transcripts and reports.

For approximately a year, The Post & Email has covered the case of former Shelby County jailer Earley Story, who reported substandard and dangerous conditions to the NAACP and FBI and was afterward framed for selling marijuana to an undercover agent and his companion informant. Story was convicted of the crime despite the existence of exculpatory evidence which was never presented at his trial and of which he did not become aware until approximately two years ago.

After 20 years, Story continues to attempt to clear his name with the support of the National Police Defense Foundation (NPDF).

An email sent a month ago to Slatery’s office pointing out Alfredo Shaw’s recanting of his original testimony in Carruthers’s case went unanswered.

“I fear sometimes that I have been targetted because of my vigorius attempts to assert my constitutional & state rights,” Miles’s letter continues. [sic]  He then stated that although the online profile we referenced in our return letter indeed indicated he was scheduled for a court hearing on October 7, “Today is October 9, 2019 and I have not been escourted to court, nor been told what’s going on.”

“This is the second time I was due for trial and nothing has happend,” Miles’s letter continued. “I’ve filed numorus of motions not a one has been heard in almost 3 years of being incarcerated here, But I’m starting to vent and that is not the purpose of this letter.”

“I just want to thank you sincerly,” the letter ends. 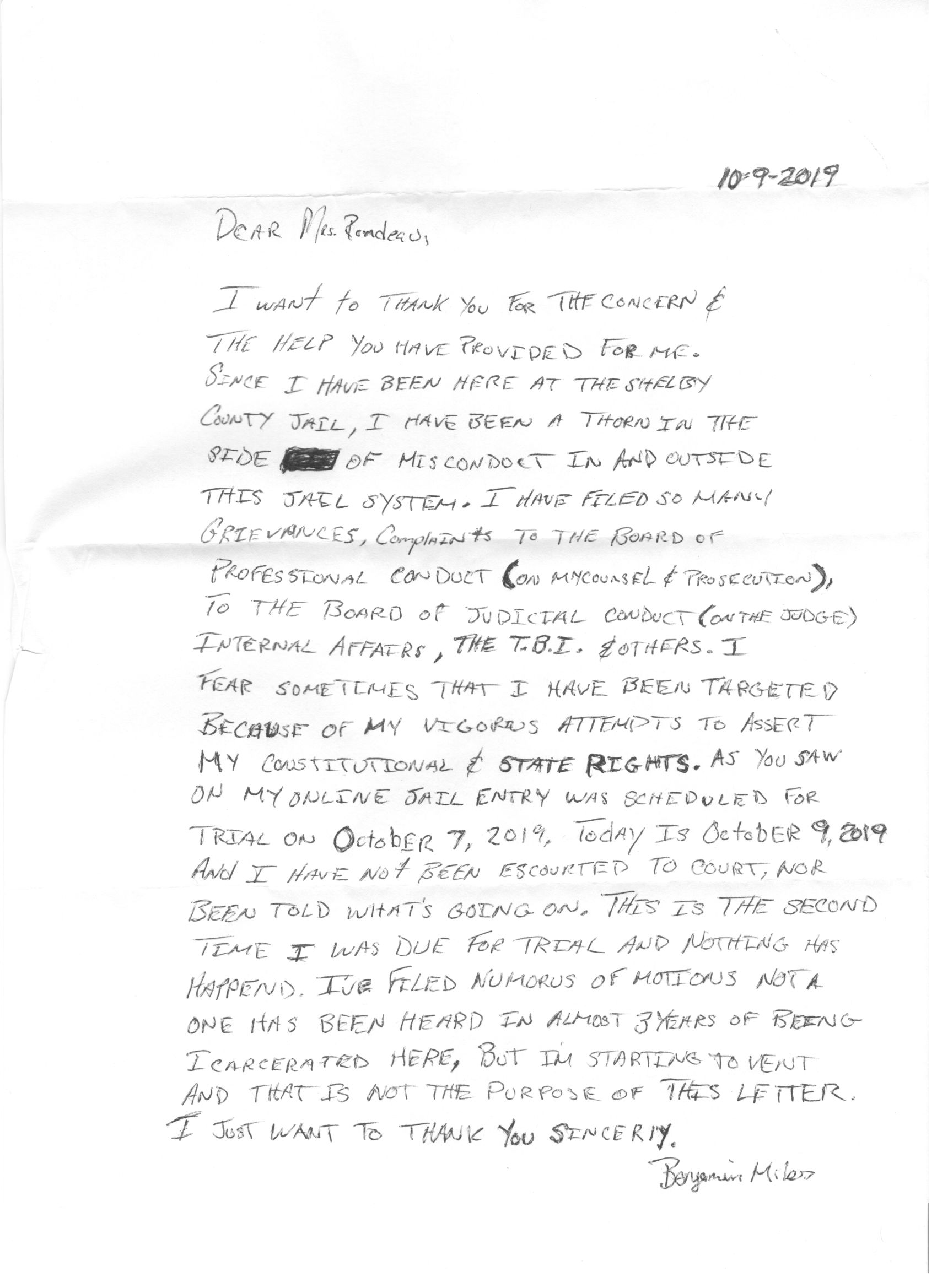 Tennessee: Shelby County Inmate Says He is “Thorn in Side” of Judicial System added on Friday, October 25, 2019