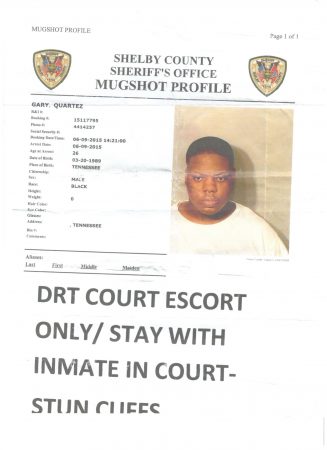 (Aug. 23, 2019) — Shelby County, TN jail inmate Quartez Gary has contacted The Post & Email for a second time regarding his long-term incarceration which began in June 2015 without an indictment.

As The Post & Email has reported for nearly ten years, like most states, Tennessee uses the grand-jury system to weigh evidence presented to it by the government to determine whether or not probable cause exists to charge a citizen with a crime, normally a felony.

The Fifth Amendment states that “No person shall be held to answer for a capital, or otherwise infamous crime, unless on a presentment or indictment of a grand jury, except in cases arising in the land or naval forces, or in the militia, when in actual service in time of war or public danger; nor shall any person be subject for the same offense to be twice put in jeopardy of life or limb; nor shall be compelled in any criminal case to be a witness against himself, nor be deprived of life, liberty, or property, without due process of law; nor shall private property be taken for public use, without just compensation.”

As Gary pointed out in his class-action federal lawsuit against the State of Tennessee and as is evidenced by his criminal court record, he was arrested on June 9, 2015 and jailed but not indicted until April of the following year.

Gary claimed in the suit that jailing an individual prior to a grand jury issuing an indictment is unconstitutional, in addition to which he maintains that Tennessee grand juries are “not properly constituted” as a result of the grand jury foreman serving multiple consecutive terms.

As was first discovered by Walter Francis Fitzpatrick, III in September 2009, Tennessee criminal court judges have long hand-picked the grand jury foreman from anywhere in the community without a standardized vetting process. Rather than choosing the foreman from the pool of jurors which by law must undergo vetting for eligibility to serve and any conflicts of interest, judges have been reported to have placed a phone call to an acquaintance to ask him or her to serve as grand jury foreman.

In the case of Shelby County, as Gary detailed, grand jury foremen Pat Vincent and Mary Thomas served multiple terms, a claim The Post & Email has corroborated independently based on grand jury foreman appointing orders it has obtained.

Last summer, local media reported that Thomas had been removed from her post as grand jury foreman for allegedly failing to “follow proper procedure.”

In his July 31, 2019 letter, Gary additionally reported that he has been sentenced to 23 years in state prison, which agrees with the Shelby County Criminal Court record, apparently resulting from two plea deals he accepted in September 2016. 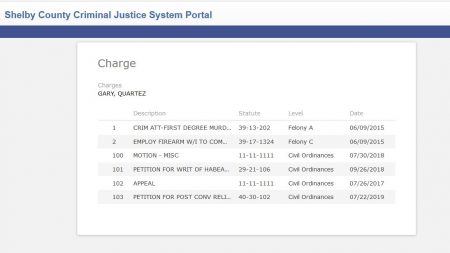 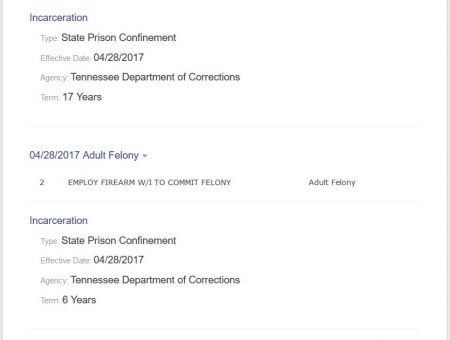 Not previously reported is that during transport to court, Gary said he has been ordered to be placed in “high voltage stun/shock cuffs.” Therefore, Gary wrote, when he is in the courtroom, “anything I say is under duress from the threat of being electrocuted.”

Gary said Judge Lee Coffee is responsible for that order.  His court record shows that Coffee is presiding over a current case. 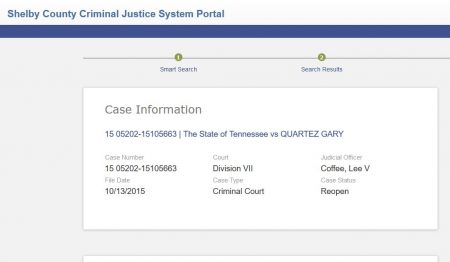 Through research following receipt of Gary’s letter, The Post & Email learned that “stun” handcuffs or ankle cuffs can deliver a shock of up to 80,000 volts if a prisoner’s actions are flagged as non-compliant. 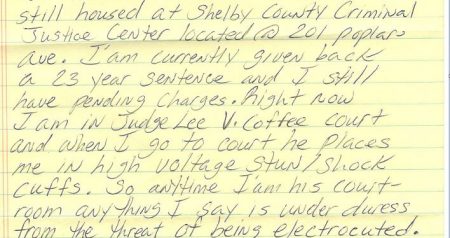 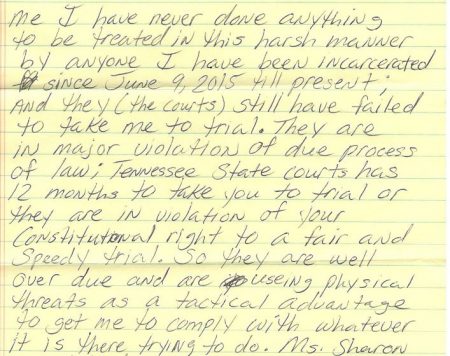 While The Post & Email was unable to find a Tennessee statute mandating a one-year window for taking an accused to trial, TCA 40-14-101 states that “In all criminal prosecutions, the accused is entitled to a speedy trial and to be heard in person and by counsel.”

Normally, county jails accommodate inmates for one year or less. for sentences longer than 11 months and 29 days, convicts are normally sent to state prison.

Why is Quartez Gary Still in the Shelby County Jail? added on Friday, August 23, 2019

One Response to "Why is Quartez Gary Still in the Shelby County Jail?"