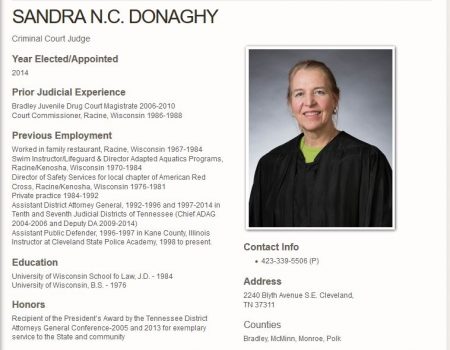 (Jul. 29, 2017) — On Saturday, Walter Francis Fitzpatrick, III received in the mail an order from McMinn County, TN Criminal Court Judge Sandra Donaghy indicating that an alleged report produced by a three-person panel of the county “grand jury” was filed “under seal” so as to “protect” him.

On Tuesday, July 18, Fitzpatrick went to the McMinn County “Justice Center” with a document package totaling approximately 400 pages detailing what he believes to be clear evidence of public corruption encompassing, but not limited to, the manner in which Tennessee judges hand-select grand jury foremen.

According to Donaghy, the documentation package was also placed under seal, although Fitzpatrick has said that it is already publicly available.

For more than a century, Tennessee’s criminal court judges have invited their business and personal acquaintances to chair the grand jury, circumventing the mandated empaneling of a jury pool from which grand jurors are ultimately selected after having been screened for conflict of interest and other considerations.

Enshrined in the American judicial system is the concept that jurors are to be “peers” of citizens petitioning the courts for redress of grievances or of those accused of a crime by the government.

From January 2012 through March 2014, President & CEO Jeffrey L. Cunningham, of Athens Bancshares Corporation, the parent company of AFCB, was grand jury foreman, having been handpicked by Judge Amy Armstrong Reedy.

Cunningham’s successor, Larry Wallace, was an active AFCB Board member through at least last year and likely still active. Another former McMinn County grand jury foreman, Joel Riley, who was reappointed by Reedy, was on the AFCB Foundation Board of Directors as of 2015.

The grand jury foreman is paid $11.00 daily.  In the past, Bloomberg stated Cunningham’s annual salary at the bank as $630,000 but has not provided that information since January.

Why a “CEO, President & Director” of a federally-chartered bank would wish or have the time to serve as county grand jury foreman has never been answered; the same question arises with Wallace, who is listed as Chairman of Athens Bancshares by Bloomberg.

Cunningham is a licensed attorney, while Wallace is a retired law-enforcement professional who once served as McMinn County sheriff.

The Tennessee appellate and supreme courts have found nothing amiss in the way grand jury foremen in the state are hand-selected from outside of the jury pool, although state law does not allow special selection or treatment of the foreman.

Rule 6(g)(2) of the Tennessee Rules of Criminal Procedure states that the foreman “must possess all the qualifications of a juror,” but with the judges’ personal selection, they are not vetted and their “qualifications” or potential conflicts of interest remain undisclosed.

A Knoxville appellate court upheld Fitzpatrick’s 2014 convictions of “aggravated perjury” and “extortion” stemming from his request to testify to the grand jury then, as he did on July 18.  Last year, the Tennessee Supreme Court refused to consider Fitzpatrick’s appeal, which was subsequently filed with the U.S. Supreme Court but not granted a hearing.

Fitzpatrick spent 26 months and 17 days confined to state prison, where he contracted septicemia and nearly died.  He was released on October 25, 2016 and provided a one-way bus ticket to Athens, McMinn County, where he had resided since February 2012.

In the evidence packet Fitzpatrick provided to the “grand jury” panel on the 18th, he included documentation from two U.S. Supreme Court cases which maintain that “prejudicial” means of appointing the foreman of a grand jury cannot be tolerated.

On the first page of her order, Donaghy recounted that on July 18, Fitzpatrick petitioned for a grand jury hearing.  Although not cited, Tennessee code allows for any citizen to ask to testify to his local grand jury.

Contrasted with Cunningham’s handling of Fitzpatrick’s petitions three years ago is Donaghy’s acknowledgement that because current grand jury foreman Larry Wallace was accused of criminal activity in Fitzpatrick’s latest documentation, Wallace was “required” to recuse himself from the foremanship.

Although named in Fitzpatrick’s 2014 petitions, Cunningham did not recuse himself and became the chief trial witness against Fitzpatrick, during which Cunningham admitted that he never filed a criminal complaint.

On March 18, 2014, Fitzpatrick was arrested at the courthouse by two sheriff’s deputies while awaiting a decision outside of the grand jury room on his request to testify.

As Donaghy further noted on pages 1-2, Tennessee code states that a petitioner may select the two panel members joining the foreman to screen the evidence brought by the petitioner to determine whether or not it will proceed to the full grand jury. 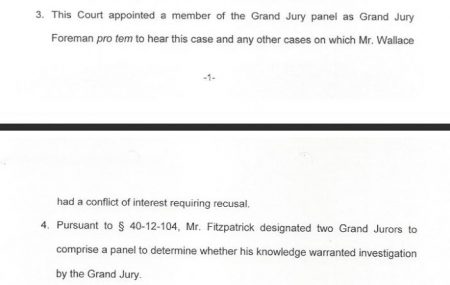 Fitzpatrick’s account of the event differs from Donaghy’s.  “I did not pick two jurors,” he told The Post & Email on Saturday. “I picked two numbers, #1 and #2, completely uninformed.”

Fitzpatrick told The Post & Email following his July 18 meeting with the three-member panel that “The government retains control of the process.  The state picks the foreman, so the petitioner should be able to pick the other two who join the foreman to form the three-member screening panel.  But here, the state picked all three.”

He also said that he specified to Donaghy’s grand jury foreman pro tem appointee, Terry Bowers, that he wanted the two other panelists to consist of a veteran and an individual with a college degree, at a minimum.  His request was ignored.

Given that Wallace recused himself, however, Fitzpatrick said that “there was no basis for my arrest” on March 18, 2014.  “The state gave up its case against me,” he said.

Regarding Donaghy’s decision to “seal” the decision of the three-member “grand jury” panel, Fitzpatrick said, “Donaghy sealed the records because they incriminate Cunningham, Wallace, Riley, and herself, for that matter.”

In a brief statement, the panel, whose names were redacted, claimed that Fitzpatrick was “not credible” in his claims.  Given that Fitzpatrick left the panel with 400 pages of documentation and that its report was allegedly “filed with the Court Clerk” (p. 2) the same day, Fitzpatrick is certain that none of it was reviewed.

Citing Tennessee code and “case law,” Donaghy maintained that Fitzpatrick will not be permitted to return to request another grand jury hearing concerning his allegations. 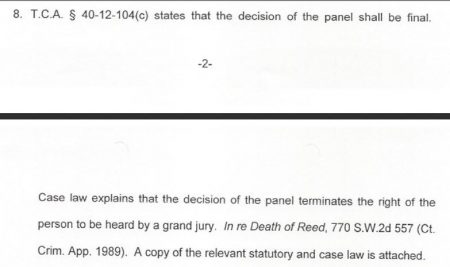 When Donaghy ran for Criminal Court Judge in 2014 against then-incumbent Amy Armstrong Reedy, she told The Post & Email, “If elected I intend to “follow the law.”