AND WHAT IS “PROPER PROCEDURE” FOR HER REPLACEMENT? 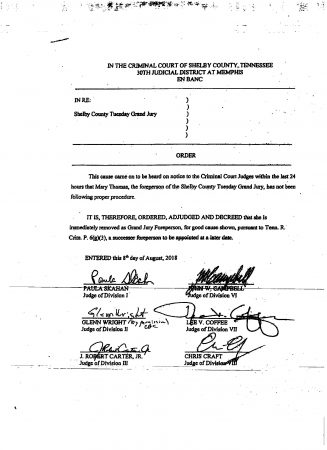 (Dec. 26, 2018) — Approximately two weeks ago, The Post & Email came into possession of a court order emanating from the “Criminal Court of Shelby County, Tennessee” indicating that a long-term foreman of the county grand jury, Mary Thomas, was removed from her post.

Thomas’s dismissal is of interest to this publication given that dozens of Shelby County jail inmates have inquired as to her status over the last 18 months, with some claiming to have heard that her signature was “forged” on a number of indictments.

According to earlier documentation we received, Thomas had served recurring terms as foreman of the “Tuesday grand jury” since at least 2010, but likely beginning years earlier.

Shelby County is located in Tennessee’s 30th Judicial District, which includes the city of Memphis. The Post & Email has reported on several cases arising there involving corruption on the part of police officers, members of the Shelby County Sheriff’s Office, investigators, judges, prosecutors and witnesses, collectively.

Questionable prosecution methods have been cited in public reporting on the district’s chief prosecutor, Amy Weirich, who received a private reprimand for her courtroom behavior in the nationally-reported Noura Jackson case.

The two-page order dismissing Thomas is dated August 8, 2018 and states that Thomas “has not been following proper procedure.” The order does not specify a single date on which Thomas allegedly broke from protocol.

On August 14, 2018, Fox13 reported that Thomas “failed to follow proper procedure on July 31, 2018,” thereby causing her removal by the full complement of criminal court judges.  In an updated article, the news site reported, “The Shelby County District Attorney’s Office issued a statement today saying the date of the incident was changed. It was initially reported that the grand jury foreperson failed to follow proper procedure on July 31, but that was corrected to say it happened on July 17.”

“During the proceedings on July 17, Thomas allowed the 12 members — plus the five alternates — to participate in deliberation and voting procedures,” Fox13 further elaborated.  The correct procedure, the paper reported, was to have allowed only the 12 members of the grand jury to listen to testimony, deliberate the evidence presented, and vote whether or not to indict the accused party.

As we have exposed since late 2009, virtually all grand juries in the state of Tennessee contain judicially-selected grand jury foremen who often serve for years or even decades consecutively. In one county, businessman Stan Fossick served as Davidson Grand Jury Foreman between 2000 and 2010 and was hand-selected by the criminal court judge to return last year, as reported on August 1, 2017 by The Tennessean.

An article dated the following day published by the Tennessee Bar Assocation (TBA) does not independently question the legality or constitutionality of Fossick’s service to “at least 42 grand juries” or his friendships and donations to judges over the years.  “Grand jury reports written from juries that Fossick served as foreman on praised police and the courts above all others,” the TBA reported, citing The Tennessean‘s coverage of Fossick’s reappointment.

In the same county in 2013, grand jury foreman Eugene Grayer was discovered after the fact to have been a convicted felon, constituting a violation of state law and necessitating a review of the approximately 919 cases he had impacted.

Documentary evidence exists That prior to the beginning of the 20th century, Tennessee criminal court judges did not handpick the grand jury foremen; rather, each was chosen from “the venire,” meaning the jurors impaneled through the method established by the legislature.  In 1919, however, the legislature passed a law allowing a criminal court judge to select the foreman “within his discretion from the community at large.”  Although outlawed in 1979, the practice continues to this day. 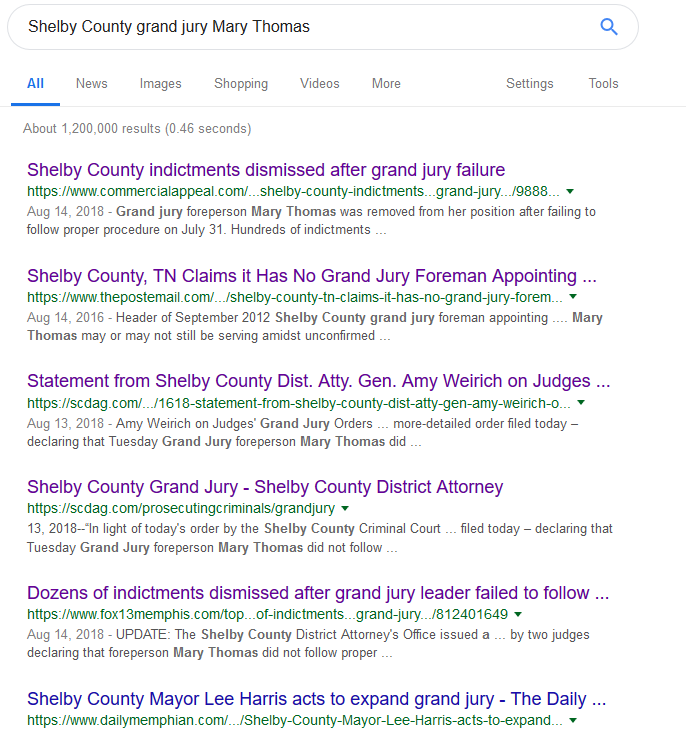 When attempting to reach the announcement at the Shelby County District Attorney General’s website of the decision to remove Thomas, the following result was returned: 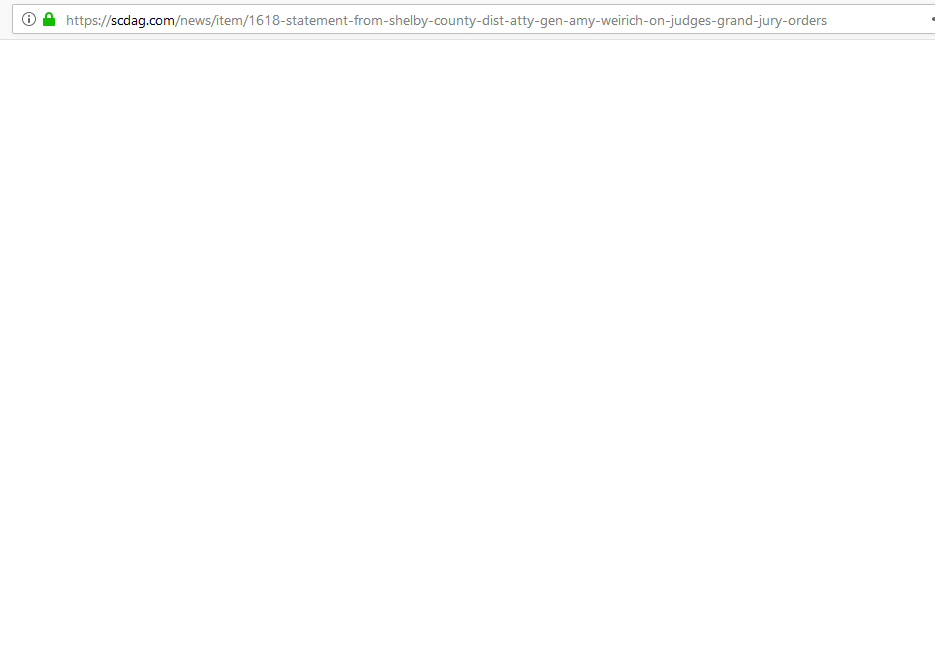 Retrying more than an hour later, we reached the announcement, which stunningly admits that “The foreperson is hired by the Criminal Court judges.”

After clicking the link to an article in The Commercial Appeal, we received the message, “The Site is down for maintenance.”

A subsection of the District Attorney General’s website titled “Grand Jury” bears an abbreviated version of Weyrich’s announcement explaining why Thomas was dismissed. 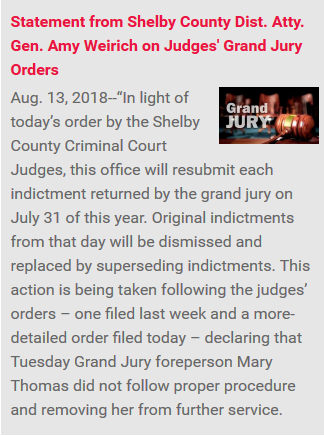 At approximately 11:34 AM EST Wednesday, The Post & Email left a message with the office of the Shelby County grand jury administrator, listed on the website as “Johnny McFarland.”  However, when we reached the voicemail greeting at the listed number, it was that of a “Debbie Hunt.” We left a message identifying ourselves as “media” and asked for details about who replaced Thomas and what vetting methods might have been used.

We also called the Shelby County Circuit Court, whose clerk said she could not handle a media call and referred us to the Shelby County Criminal Court at 901-222-3200.  We called there and were transferred several times, then asked to call 901-222-3325 and ask for Kevin Phelps. Phelps’s phone was answered by a woman who said she could not handle media calls.  Loud music was playing at one point while we were on hold. 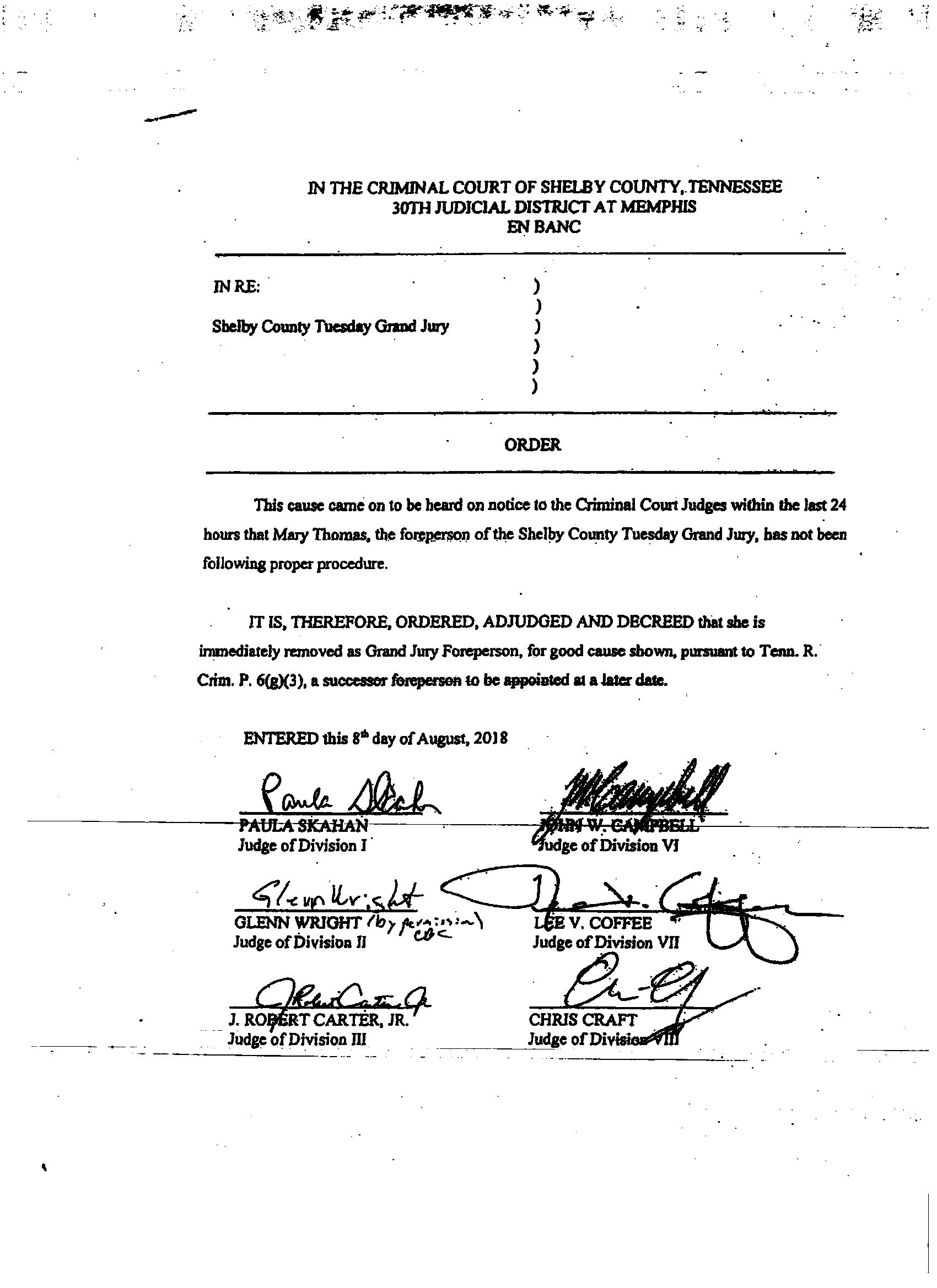 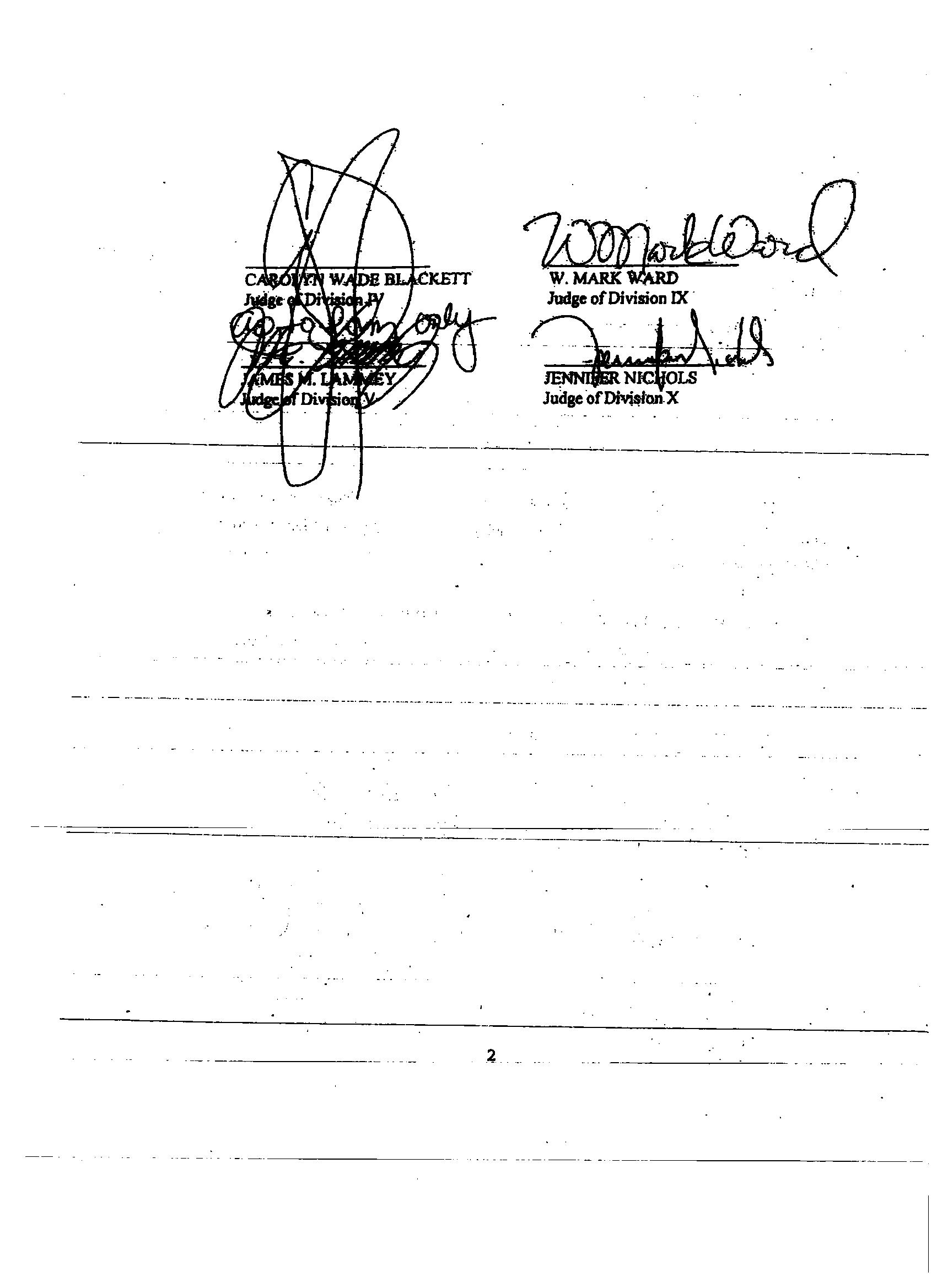 Any responses received from the two parties with whom we ultimately left messages will be provided as an update.

3 Responses to "Why Did Shelby County Remove its Longstanding Grand Jury Foreman?"