NOT HANDPICKED BY A JUDGE 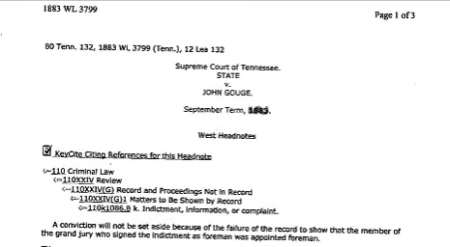 (Nov. 28, 2015) — A Tennessee Supreme Court case from 1883 indicates that at that time, the foreman of the county grand jury was chosen by the criminal court judge from among the 13 impaneled citizens comprising “the venire,” or grand jury panel.

In State of Tennessee v. John Gouge [80 Tenn. 132, 1883 WL 3799 (Tenn.), 12 Lea 132], the state Supreme Court responded to a challenge from an individual in Carter County convicted of “larceny” that the absence of an official appointment of the grand jury foreman did not negate the validity of the indictment as signed by the presumptive foreman.

The discovery of the case was made by an inmate at the Northwest Correctional Complex (NWCX) in Tiptonville while performing research in the institution’s law library earlier this month.

Since 2009, retired Navy Lt. Commander Walter Francis Fitzpatrick, III has attempted to gain the attention of Tennesseans regarding the custom of criminal court judges’ handpicking of the grand jury foreman from outside of the jury pool with no known vetting process. Fitzpatrick is currently serving a three-year sentence on convictions of “aggravated perjury” and “extortion” handed down in June of last year after he approached the McMinn County clerk with a petition for the grand jury alleging corruption among judges, law enforcers, prosecutors, and the grand jury “foreman,” Jeffrey L. Cunningham.

According to Cunningham during testimony in the case, he was handpicked to serve as foreman by then-Judge Amy Armstrong Reedy in a telephone call Reedy made to his home in December 2011. Cunningham is CEO and president of the Athens Federal Community Bank, a Tennessee licensed attorney and member of the Tennessee Bar Association.

Tennessee judges have been handpicking grand jury foremen since at least 1919, when the legislature passed a law approving the practice. Although repealed in 1979, judges have continued to choose the foreman from outside of those impaneled by “random, automated means” as later defined in a 2008 statute. Those defending the practice claim that it is a Tennessee “tradition.”

While the selection process of the foreman was not the main point of the 1883 case, the court indicated that the foreman, although appointed by the judge, was one of 13 impaneled grand jurors.  “A conviction will not be set aside because of the failure of the record to show that the member of the grand jury who signed the indictment as foreman was appointed foreman,” the court opined.

Page 2 of the Westlaw summary of the case states that “T.S. Webb and S. J. Kirkpatrick” represented Gouge, one of two men convicted of “stealing a large sum of money, probably $1,000 or $1,500, from James Whitesides, of Carter County.”

The court noted that Gouge’s attorneys asked that their client’s conviction be reversed based on their claim that “the record does not show affirmatively that T. L. Hyder, whose name appears on the indictment as foreman of the grand jury, reporting to the court as a ‘true bill,’ was appointed foreman.”

In response, the court wrote:

The fact is as stated. But the record does show that he was sworn as one of the grand jury, that the thirteen names were regularly drawn to serve as grand jurors at this term, who being impaneled, charged and sworn to inquire for the body of the county aforesaid, retired to consider of indictments and presentments.

The court then invoked Article 1, Section 14 of the Tennessee constitution, which states:

That no person shall be put to answer any criminal charge but by presentment, indictment or impeachment.

“By section 4015, et seq., the method of forming or impaneling a grand jury is prescribed, substantially, by placing the names of parties summoned on the venire, who are in attendance, in a box or other receptacle, and having the scrolls drawn out by a child under 10 years of age, ‘and the 13 jurors whose names are first drawn shall be a grand jury for the term,'” wrote the court.

“Venire” is defined as:

Tennessee criminal court judges currently choose a foreman with whom they are acquainted and who has often served in that capacity previously. Some grand jury foremen have served for many consecutive years at the judge’s pleasure without documentation that they ever qualified to serve on a jury.

Nearly three years ago, a Davidson County grand jury foreman was discovered to have been a convicted felon serving in violation of state law.

In cases on which The Post & Email has reported, trial jurors have also been hand-picked by the judge in violation of TCA 22-2-301.

Since inadvertently learning of the practice of handpicking foremen, Fitzpatrick has claimed that Tennessee judges are operating a “dictatorship” which ensures a conviction against as many defendants as the judges desire.  Fitzpatrick’s former attorney, Stephen Pidgeon of Washington State, has termed the Tennessee criminal courts “hopelessly corrupted.”

In May 2012, Fitzpatrick discovered laws passed by the Tennessee legislature in 1984 which ordered the county criminal courts to form districts consisting of several counties rather than one, with the exception of large counties such as Knox designated as standalone districts.  Today, judicial districts reflect the inclusion of between three and five counties within their jurisdiction, but each county continues to operate its own “criminal court” proceedings.

Rule 6(a)(1) of the Criminal Court Rules states that “On the first day of each term of court at which a grand jury is required to be impaneled, the judge of the court authorized by law to charge the grand jury and to receive its report shall direct the names of all the qualified jurors in attendance for the criminal courts of the county to be written on separate slips of paper and placed in a box or other suitable receptacle and drawn out by the judge in open court. The foreperson and the twelve qualified jurors whose names are first drawn constitute the grand jury for the term and shall attend the court until dismissed by the judge or until the next term,” which may allow for interpretation by judges wishing to appoint a foreman “from wherever they choose,” as stated by Monroe County Chief Clerk Martha M. Cook.

The Tennessee District Attorneys General Conference defines a grand jury as “a group of thirteen citizens chosen from the jury panel. One of these thirteen is the fore person and will preside over the grand jury. The grand jury hears testimony from witnesses in a private session.”

Tennessee mainstream media have been unwilling to report on corruption within the courts for an unknown reason, even when presented with extensive documentation.

During a lengthy soliloquy in Fitzpatrick’s sentencing hearing on August 19, 2014, Senior Judge Jon Kerry Blackwood asked rhetorically, “Who cares if the grand jury foreman is serving illegally?” before pronouncing Fitzpatrick’s sentence of three years in state prison.  At the same time, Tennessee Board of Probation and Parole officer Judith Hilton-Coffman verbally altered her report in which she had written that Fitzpatrick’s “crimes” had “no victim.”

Fitzpatrick’s current attorney, Van Irion, appealed the convictions, with oral argument held in May. However, on September 8, the appellate court in Knoxville ruled that the convictions would stand and that grand jurors with a bias against the defendant were not prohibited from casting a vote for or against an indictment.

The court also clearly sought to protect Cunningham from criminal prosecution given that as the chief witness and Fitzpatrick’s alleged accuser, Cunningham admitted during sworn testimony to never having filed a criminal complaint against Fitzpatrick, among other irregularities.