(Sep. 30, 2016) — As related in earlier articles with this title in part 1 here and part 2 here, TDOC inmate Walter Francis Fitzpatrick, III described his having been subpoenaed to testify in an August 16 post-conviction hearing for an inmate from Shelby County.

Fitzpatrick was called as an “expert witness” as a result of his seven years of studying grand jury processes in Tennessee.  In September 2009, Fitzpatrick attempted to advance a petition to the Monroe County grand jury which was ultimately unsuccessful.

After relocating to McMinn County early in 2012, Fitzpatrick brought a number of petitions concerning government corruption to the grand jury there but was arrested on the last occasion in March 2014.  In June of that year, he was tried and convicted of two felonies which his attorney, Van Irion, said was punishment for Fitzpatrick’s having exercised his right to free speech in petitioning his government for redress of grievances.

The hearing was held on behalf of Jerome L. Johnson, who was indicted in Shelby County in December 2010 for serious crimes.  Johnson and Fitzpatrick met at the Northwest Correctional Complex (NWCX) in Tiptonville, where Fitzpatrick was transferred in late 2015.

After answering questions for several minutes, Fitzpatrick was ordered out of the witness chair by an angry Shelby County Judge Lee V. Coffee.

As The Post & Email has discovered and reported, Tennessee judges have been hand-picking grand jury foremen for nearly a century by means of a law passed in 1919 permitting the practice.  Although repealed in 1979, the law has continued to be carried out, with judges quick to say, when challenged, that their personal selection of the foreman from outside of the jury pool is within their authority.

An 1883 Tennessee Supreme Court case describes the grand jury foreman as chosen “from the venire,” not at the whim of the judge from anywhere in the community, as is done today.  The undue influence exerted on the grand jury by the hand-picked foreman places into question the legitimacy of every “True Bill,” or indictment, produced by the grand jury during its private deliberations.

In both parts 1 and 2, Fitzpatrick detailed how Coffee abandoned his position as an “impartial” jurist, becoming a “hostile witness” against Johnson.  Coffee reportedly objected to Fitzpatrick’s proffering of Johnson’s indictment on which the signature of the grand jury foreman who is illegible and the person’s identity therefore unknown.

When asked, Shelby County has not produced any grand jury foreman appointing orders, although Fitzpatrick is in possession of at least one, as is The Post & Email from a different year.

Over the past six weeks, The Post & Email has heard from approximately two dozen Shelby County inmates who report that a “Pat Vincent” and a “Mary Thomas” have served as grand jury foremen for many years.  While some related a rumor that Thomas was deceased but her signature still being used on indictments, Fitzpatrick acknowledged the rumor but dispelled it.

The following is the remaining pertinent part of his letter describing the hearing.  “Carroll Lee Ross” refers to a retired Monroe County judge who told Fitzpatrick during an arraignment hearing that he would continue reappointing then-grand jury foreman of 28 years Gary Pettway for as long as he wished. 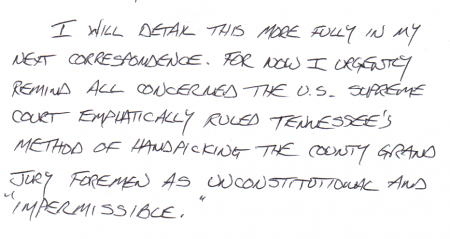 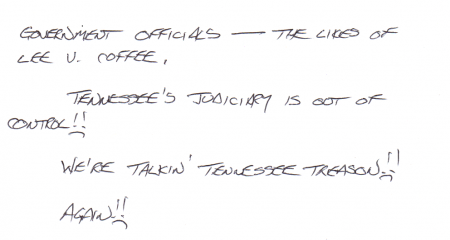 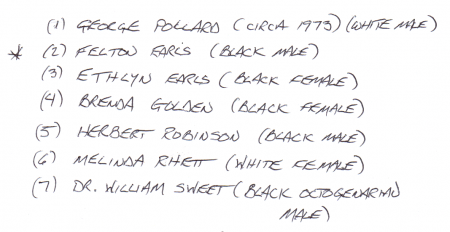