(Aug. 19, 2014) — During the sentencing hearing for CDR Walter Francis Fitzpatrick, III (Ret.) at the McMinn County courthouse on Tuesday morning, Senior Judge Jon Kerry Blackwood reportedly excoriated Fitzpatrick for attempting to submit evidence of criminal wrongdoing on the part of government officials to the grand jury in March.

At the trial, no evidence, police report, criminal complaint, or specifics about the alleged crimes were presented.  Former grand jury foreman Jeffrey Cunningham said under oath that he had not accused Fitzpatrick of a crime, although previously, he had said that he was the victim of Fitzpatrick’s actions.

The jury convicted Fitzpatrick of extortion and aggravated perjury, despite no proof of Fitzpatrick having stated anything untruthful in his numerous petitions to the grand jury over the course of several months.  Tennessee law states that any citizen may bring evidence of wrongdoing to the grand jury for its review.

In a pre-sentencing report made public on August 11, investigator Judith Hilton-Coffman stated that “there was no victim” in the case.

In the fall of 2009, Fitzpatrick discovered that grand jury foremen serve repeated terms, having been hand-picked by the criminal court judge.  In early 2011, Monroe County court clerk Martha M. Cook told a local newspaper that the judge selects the foreman “from wherever they choose.”

Local media has not reported on the constitutional violations carried out against the community’s citizens daily.

Monroe, McMinn, Polk and Bradley Counties comprise the Tenth Judicial District of Tennessee, which is known for its police brutality, prosecutorial misconduct, rigged juries, dictatorial judges and inordinately high percentage of its citizens on court-ordered probation, parole or drug rehabilitation.

Blackwood reportedly took verbal aim at Fitzpatrick in a very person way, obviously upset that Fitzpatrick had continued to blow the whistle on the judicial corruption which has preyed on the citizens of Tennessee for decades and deprived them of their constitutional and civil rights.

Eyewitness reports on Tuesday say that Blackwood banged his fist on the bench repeatedly while exclaiming, “Who cares if the grand jury foreman is serving illegally?  So what?”

Tennessee law states that jurors must be chosen by automated means.

Another eyewitness said that after Fitzpatrick was handcuffed and was escorted out of the courtroom, someone stood up and said, “Thanks, Walt,” after which the 50 or so people in attendance stood up and clapped for “a good, long time.”  “What that tells me is that the local folks there are realizing what’s going on in East Tennessee.  They indicated they were tired of the corruption.”

The same observer told us that “the judge’s final sentencing statement was really, really sick.”

The Post & Email will be a guest on The Manning Report at 3:20 p.m. EDT to discuss the sentencing. Lt. Col. Field McConnell, USMC (Ret.), who traveled from Wisconsin to Athens on Sunday to host a prayer breakfast and barbecue on Monday and accompany Fitzpatrick into the courtroom on Tuesday, was also invited by Manning but is currently being filmed by William F. Fain, who is making a professional video of the events of the last two days and will be producing a documentary on the judicial corruption which has again landed in Fitzpatrick in jail. 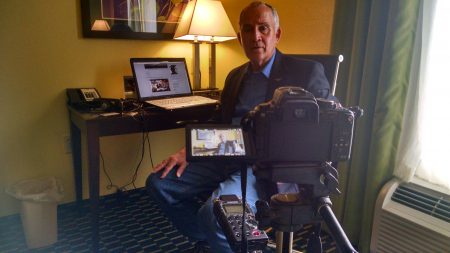 Fitzpatrick spent ten days in the McMinn County jail after his arrest on March 18 and was jailed six times in Monroe County on various trumped-up charges.

Donations are still needed for Fitzpatrick’s Legal Defense Fund and for the production of the video and documentary, the latter of which can be made via Paypal to payments@thepostemail.com.

Two local news channels attended the sentencing and are expected to present reports on Tuesday.

Blackwood: “Who Cares If the Grand Jury Foreman is Serving Illegally?” added on Tuesday, August 19, 2014

2 Responses to "Blackwood: “Who Cares If the Grand Jury Foreman is Serving Illegally?”"