SPECULATION IS NOT JOURNALISM

(Aug. 30, 2019) — As we reported in Parts 1, 2 and 3 of this series, numerous statements made in an August 9 interview between host Sarah Westall and guests Mary Fanning and Alan Jones are provably false or based purely on speculation.  Fanning and Jones claim to be “investigative journalists” and write at The American Report.

In that interview and others, Fanning and Jones reiterated numerous claims made by former NSA and CIA contractor Dennis Montgomery over the years of massive, unwarranted government surveillance on millions of American citizens which remain unproven. As The Post & Email has reported, since 2009 Montgomery has received a great deal of negative media coverage and earlier this year was seeking, at least from this publication, a “positive” narrative.

Fanning and Jones appear to be complying with Montgomery’s request, regardless of statements recorded in court transcripts and federal judicial opinions reflecting Montgomery’s failure to produce the evidence he claimed to have as part of a pattern over many years.

On page 58 of a 2016 opinion decided in favor of the defendant, James Risen, by U.S. District Court Judge Rudolph Contreras, plaintiff Dennis Montgomery is described as a “limited-purpose public figure” given his former government-contractor status.

Risen is author of the 2014 book “Pay Any Price:  Greed, Power and Endless War,” about which Montgomery sued Risen in 2015 over a chapter in which Montgomery was the subject.  The following year, Contreras ruled against Montgomery after he failed to produce the software and source code which he claimed worked as touted and formed the basis of his defamation suit.  A three-judge appellate panel affirmed that ruling in November 2017.

In the conclusion of his chapter about Montgomery, Risen wrote: 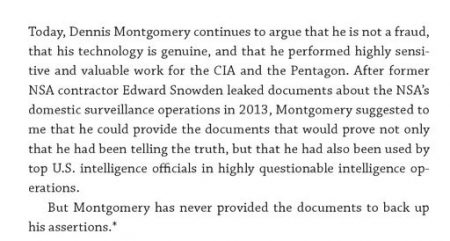 Among other claims, Fanning and Jones have reported that a mega-computer system allegedly built by Montgomery referred to as “The Hammer” was used by former CIA Director John Brennan and former Director of National Intelligence James Clapper to spy on Donald Trump.  While that might, in fact, be accurate, no proof of the oft-repeated claim has been offered by anyone promoting the narrative, including internet hosts who appear disinterested in performing any due diligence.

In this age of unreliable major media outlets, strident opinions masquerading as fact, and outright misrepresentations by such former bastions of truth as The New York Times, The Post & Email believes it commendable when average citizens step forward to investigate corruption in government, a cause to which this publication has dedicated itself for the last ten years. The job is by nature time-consuming, at times meandering and often thankless.  The pursuit of the truth inevitably leads to the exposure of charlatans posing as truth-tellers as well as threats and defamation.

“Investigative journalism” seeks to uncover the truth, not to promote a narrative.  It is more than simply accepting at face value what any single source claims, particularly when that source’s statements are refuted by court records and eyewitnesses with a proven record of accuracy.

The Post & Email is confident of its presentation of the facts in the “Dennis Montgomery” story dating back to October 2013 based on an impeccable source, Mike Zullo, an investigator working for Sheriff Arpaio.  Zullo was not only an eyewitness to many of the events discussed in the August 9 interview, but also testified in Arizona’s U.S. District Court on his role in them, the transcripts of which we have referenced since November 2015.  Additional sources we have utilized are judicial opinions, longstanding media reports and interviews, court transcripts and dockets.

Based on Zullo’s accounts of his time supervising Montgomery while he worked as a confidential informant for the Maricopa County Sheriff’s Office (MCSO) in 2014, The Post & Email has made clear that data Montgomery initially provided to the law-enforcement agency was found to be “verifiable” and that Zullo, in fact, “verified it.”  Its source, however, remains a mystery, Zullo said.

Atty. Larry Klayman, founder of Judicial Watch and Freedom Watch, came to represent Montgomery in several actions and in front of Judge Royce Lamberth after Zullo introduced the two at a Phoenix, AZ restaurant in 2014, a fact Klayman, Fanning and Jones have failed to disclose.

Noticeably, Fanning and Jones have excised Zullo and the MCSO from Montgomery’s past, depriving their audiences of the totality of information necessary to make an informed decision.  Further, they have made provably defamatory statements about Zullo and this writer when terming us “pathetic liars.”

Genuine journalism finds the truth and presents it in unvarnished form, regardless of how politically-incorrect, distasteful or unpopular it might be.  As with the 5+-year investigation Zullo personally conducted into the “long-form” birth certificate image of Barack Hussein Obama which proved to be fraudulent, the truth is increasingly avoided by an American media which has transformed itself into nothing more than an advocacy arm of a major political party.

Just as in the recent instance wherein MSNBC anchor Lawrence O’Donnell claimed to have a source indicating that President Trump had “Russian oligarchs” for cosigners on business loans he acquired while he served as head of The Trump Organization, false or exaggerated claims will always bring negative consequences.

Failing to report real news, as in the case of the Obama birth-certificate investigation, does an equal disservice to the American people.

“I think an editor should be independent, that is, of personal influence, and not be moved from his opinions on the mere authority of any individual.”  — Thomas Jefferson

Part 5 will present but a small sampling of the publicly-available documentation showing that Montgomery’s history of claiming to possess evidence of national-security significance yet failing to produce it continues to repeat itself.  It will also bring the context of the Montgomery situation, his deceptive interaction with the Maricopa County Sheriff’s Office, full circle.