“INFORMATION…WASN’T RELEASED TO THE PUBLIC” 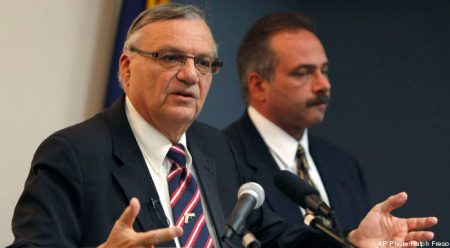 Jones’s Connecticut attorney, Norm Pattis, said on Friday’s “Infowars” show which Jones hosts daily that pornographic attachments were found to have been planted on Infowars’s server and that an FBI investigation is ongoing.

Attorneys representing five Sandy Hook victims’ surviving family members and an FBI agent who responded to the school shooting on December 14, 2012 claim that Jones sent the illicit material to them as part of court-ordered discovery.

On Friday Jones offered a reward of up to $1,000,000 to anyone providing information leading to the identification of the individual(s) who allegedly placed the illegal images on his server.

Our coverage of the dispute between the attorneys for both sides featured an interview with Obama birth certificate lead investigator Mike Zullo, who several years ago supervised a former intelligence-community contractor, Dennis Montgomery after he was hired as a confidential informant for the Maricopa County, AZ Sheriff’s Office (MCSO).  During the course of his work, Montgomery told Zullo that the implantation of pornographic material with the intent of making it appear that a user sought out, downloaded and viewed child pornography could become a technique of former government contractors seeking to harm a particular individual or individuals.

According to the U.S. Justice Department, “Federal law prohibits the production, distribution, reception, and possession of an image of child pornography using or affecting any means or facility of interstate or foreign commerce (See 18 U.S.C. § 2251; 18 U.S.C. § 2252; 18 U.S.C. § 2252A). Specifically, Section 2251 makes it illegal to persuade, induce, entice, or coerce a minor to engage in sexually explicit conduct for purposes of producing visual depictions of that conduct. Any individual who attempts or conspires to commit a child pornography offense is also subject to prosecution under federal law.”

Montgomery was a software developer for the NSA and CIA for a number of years through 2010.  In late 2013, he approached then-Maricopa County Sheriff Joseph Arpaio with the claim that as a result of his prior work, he came into possession of data showing that thousands of Arpaio’s constituents were the victims of bank fraud by a government entity.  Arpaio subsequently contracted Montgomery to assemble the data he claimed to have so that Arpaio could determine if a crime had been committed within his jurisdiction.

During the 2015 civil trial in the case of Melendres in which Arpaio was a named defendant, presiding U.S. District Court Judge G. Murray Snow ordered Montgomery’s work product to be turned over to his custody, and confidential recordings among Montgomery, Arpaio, Zullo and businessman Tim Blixseth were made public.

On a number of radio shows between 2015 and present-day, Zullo said that despite Arpaio’s characterization of Montgomery’s work product as “junk” during court testimony, some of the data Montgomery provided was, in fact, “verifiable.” Further, Zullo said, “I did verify it.”  The information, Zullo said, including during two 2017 appearances on Jones’s show, related to warrantless government surveillance of prominent businessmen, including Donald Trump; more than 150 federal judges, including two members of the U.S. Supreme Court as well as Snow; Jones and Zullo.

In 2015, Montgomery testified about the data to U.S. District Court Judge Royce C. Lamberth, who was then head of the Foreign Intelligence Surveillance Court (FISC). In November of that year, Montgomery testified to the FBI under both production and testimonial immunity represented by Atty. Larry Klayman.

On November 12 and 13, 2015, Zullo testified in Melendres that data Montgomery provided stored on numerous hard drives to Arpaio’s office was determined to be “worthless” (p. 158 in transcript below) by two former NSA officials, Thomas Drake and William Binney.

On Wednesday morning, commenter “Dennis Becker” submitted the following in response to our Alex Jones article: 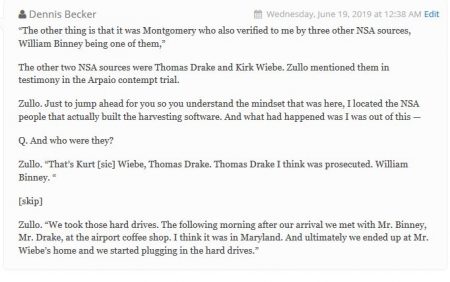 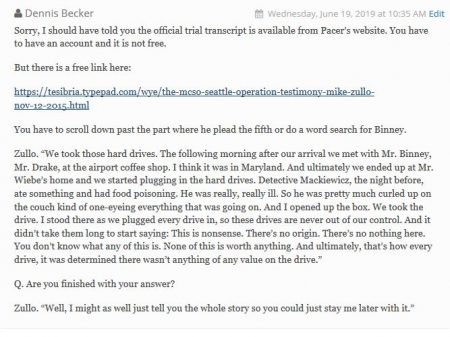 The active link within the comment leads here:  https://tesibria.typepad.com/wye/the-mcso-seattle-operation-testimony-mike-zullo-nov-12-2015.html.

On page 156 of the official transcript provided by The Post & Email, Zullo is noted to have said:

On Thursday morning, The Post & Email spoke with Zullo about the apparent discrepancy between his November 2015 testimony and his later claim that Montgomery had produced information which he was able to verify.  In response, he revealed to The Post & email exclusively:

Information turned over to the court wasn’t released to the public.  In addition, in my testimony I kept alluding to everything Montgomery was giving us.  The litigators from Covington & Burling were focused on the 47 hard drives, but prior to receiving those 47 hard drives — and I was not part of the investigation when that took place — Montgomery gave us other information on thumb drives.  That information proved to be creditable on different levels.

To explain that, when you have the identities of 151,000 people and your sampling, through investigative analysis, proves that that information is accurate but the bank account information does not appear to be known by those victims, that is verified identity information.  The bank account information, however, led to another line of inquiry that actually pointed to bank fraud on major levels reminiscent of the HSBC scandal. Montgomery didn’t know he possessed that; he didn’t know what it was.  Through investigation, I determined what it was, and that gave credibility to Montgomery:  the fact that he had collected information at some point in time when he was working for the federal government and didn’t know what it was.  He just knew he had it.  So there was other information that wasn’t the focus of the plaintiffs’ litigators, and I was not going to divulge anything unless I was actually asked the question.  The reason is that I had no legal representation; there was no one as my advocate or from the sheriff’s office to clarify issues during my testimony.

To sum it up, Montgomery did give us information early on that was creditable.  The 47 hard drives were garbage.  But if you look at my testimony, I said before they were analyzed that they were going to be garbage.

What’s important is that things that were going on at the government level and Montgomery’s recollection of events is all being exposed today.  So he does have a story to tell.  Where the truth is and the truth ends is yet to be determined.

Part of the investigator’s job is to sift through the lies and find the truth, and there is some truth to what Montgomery said and the information he provided. It’s being borne out in the news today; what you’re reading about today we knew about in 2013 and 2014.