“WHAT DOES HE KNOW?”

(Jul. 11, 2019) — During Friday’s broadcast of “Crowdsource the Truth,” host Jason Goodman interviewed Mary Fanning and Alan Jones, who write for The American Report, which covers a variety of domestic and international topics.

As we reported in Part 1 and Part 2 of this series, the interview focused on the past activity of Dennis Montgomery, a former CIA and NSA contractor who also worked for the Maricopa County Sheriff’s Office (MCSO) from early 2014 to early 2015 as a confidential informant (CI).

In late 2013, Montgomery approached then-MCSO Sheriff Joseph Arpaio to report that he had evidence showing that more than 150,000 bank accounts of Maricopa County residents had been breached by a government entity. Arpaio subsequently hired Montgomery to produce the data he claimed to have, appointing Obama birth-certificate lead investigator Mike Zullo to oversee the project.

In November and December 2015, Montgomery testified to the FBI, the first time under production immunity and the second under testimonial immunity, according to Zullo, who said he spoke with Montgomery after the first session. “Do you think that Dennis Montgomery didn’t tell the absolute truth that they would have given him greater immunity as a reward for lying?” Fanning asked Goodman at 10:28.

In response, Goodman questioned Fanning’s premise.  “…because when we look at, as you just mentioned, the Hillary Clinton email scandal, the FBI was giving out immunity to liars like Halloween candy…”

“Only to Hillary Clinton,” Fanning said.  “No, Cheryl Mills,” Goodman said, at which point they briefly spoke over one another.

Both then-Clinton aides Heather Samuelson and Cheryl Mills were given immunity agreements by the Department of Justice.  Even though material witnesses in the email probe, both were permitted to serve as Clinton’s counsel during a July 2, 2016 FBI interview conducted just before the probe was closed.

Three others were also granted immunity.

At 43:23, Fanning said she and Jones “have investigated and written about” Montgomery’s claims “since 2014.” During that year, Montgomery’s CI status with the MCSO was leaked to The Phoenix New Times, which characterized Montgomery’s purpose as aimed at investigating U.S. District Court Judge G. Murray Snow, who was presiding over a civil-contempt trial against Arpaio.

Apparently as a result of the article, on April 23, 2015, Snow ordered Montgomery’s work product and associated materials, including recordings Zullo made while interviewing Montgomery, delivered to his chambers.  The recordings were leaked to The Phoenix New Times in November 2015, approximately one week before Zullo was called to testify in the civil-contempt trial of Arpaio and several of his deputies.

Fanning and Jones claim their March 17, 2017 article on the Montgomery recordings, termed “the Whistleblower Tapes,” to be “exclusive.”

Montgomery provided “verifiable” information at the outset, Zullo said, but data stored on approximately four dozen hard drives and later analyzed by three former NSA officials was found to be without value, as two of the officials wrote in a November 14, 2014 report directed to Arpaio’s office.

In 2015, Zullo was key in arranging for Montgomery to travel to Washington, DC to speak with a federal judge about the information on government surveillance he claimed to have. The judge with whom Montgomery ultimately spoke, Royce C. Lamberth, was head of the Foreign Intelligence Surveillance Court (FISC) at the time.

Zullo has reported in multiple interviews and broadcasts that Montgomery’s information indicated that 156 federal judges, including Snow; Donald Trump, some of his employees and family members; other prominent businessmen; Arpaio; Zullo; Infowars host Alex Jones; and radio host Michael Savage, among others, were surveilled by the federal government.

During Friday’s broadcast, Fanning claimed that Lamberth gave Montgomery immunity to testify to the FBI, a point on which Zullo disagreed. “He didn’t give Montgomery anything,” Zullo told us. “I was there.”

In an email dated May 16, 2019, Montgomery told The Post & Email that he received immunity from the U.S. Justice Department.

On Friday’s broadcast Fanning claimed that Montgomery “did not trust” Zullo but did not provide a reason when Goodman asked.  At 9:58, Fanning claimed, referring to Zullo, that “Dennis Montgomery refused to be in touch with him for a very good reason.”

At 46:10, Fanning told Goodman that “Mike Zullo” “admits in his article that he was the one who recorded the ‘Whistleblower Tapes.'”  She did not specify to which “article” she was referring.  She then said, “Mike Zullo was the one who illegally recorded Dennis Montgomery, who was under State Secrets Privilege. Now had Montgomery slipped and said anything, he would have been charged with…”

“This is not the first time Montgomery has lied about me,” Zullo told The Post & Email in an interview published Tuesday.  “The recordings in fact were made with the explicit consent of Montgomery, and that consent was established on the very first day Det. Mackiewicz and I met with him at his home in Seattle.”

At 41:58 in the broadcast, Fanning claimed Montgomery is a “biochemical engineer who holds several patents.”  On Wednesday, The Post & Email reached out to Montgomery to inquire as to the accuracy of that statement; we received no response as of press time.  Zullo said Montgomery never represented to him he was a biochemical engineer.  “I would like to see the verified evidence of that,” Zullo said.

During the interview Fanning and Jones claimed that former FBI General Counsel James Baker testified to the “House Intelligence Committee” last fall, but in fact he testified to members of the House Judiciary and Oversight & Government Reform Committees, as the latter was termed at the time.  Baker left government service in early May 2018, a fact he acknowledged during his interviews. 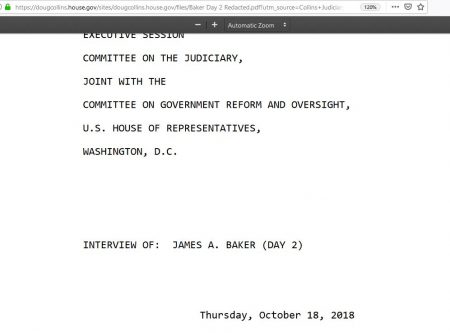 On April 9, 2019, Rep. Doug Collins, who serves as ranking member of the House Judiciary Committee, released the transcript from Baker’s first closed-door interview; the second transcript was posted the following day.

At   in the Goodman interview, Fanning claimed that the Baker transcript was “leaked” and was “never meant to become public.”  She did not provide a source for that information.  In an April 1, 2019 press release published in the Atlanta Journal Constitution and on Collins’s website, it is stated, in regard to House Republicans’ investigation into the origins of the “Russia collusion” probe and the release of multiple associated transcripts:

Collins has spent the past several months preparing for this post-Mueller moment.

The fast-talking former lawyer has become a fixture on cable news shows, where he’s tenaciously defended the president and polished one-liners about what he’s labeled the Democratic “fishing expedition” into Trump’s background.

Behind the scenes, he’s hired additional investigators and forged relationships with the national press while digging into the minutia of the GOP’s now-concluded probe of the origins of the special counsel’s investigation. One by one he’s publicly released transcripts from that closed-door probe, which delved into the maneuvering at the Justice Department and FBI that led officials to apply for a secret warrant to monitor Trump campaign official Carter Page.

As for the information Montgomery initially, provided, Zullo said, “I know for a fact there were bank breaches because I verified those. I know he had the header information of all those people who said he did, but he also promised so many things he didn’t deliver.  Here is the thing:  he fell short in his ‘free talk’ agreement with the Arizona Attorney General, so at that point, he destroyed the immunity agreement he made.  We continued with him; he started piece-mealing stuff out to us, but a tactic of his is to start giving you something on Venue A and draw your attention to Venue C without ever completing Venue A.”

Zullo had a phone conversation with Montgomery shortly after he went to the FBI.  “He told me that they took the wiretapped information from Arpaio, the call log, the banking information, everything he initially gave us; he said that’s what he brought,” Zullo told us on Wednesday.  “Same things he provided Judge Lamberth.  Then he said they verified it, called him back, and then they gave him production immunity where he gave them the hard drives before they gave him testimonial immunity.  I don’t believe they accessed the hard drives before they gave him testimonial immunity.  My sources tell me the FBI could not access and verify the information on the hard drives; my understanding is the FBI was in touch with Montgomery after he provided the hard drives and was seeking the programs to unlock the purported ‘Top Secret Information.’  Montgomery did not provide the ‘KEY’ software to provide the origin of the information or decipher it, if it even was classified or obtained the way Montgomery claims. It was the same situation he played with the Sheriff’s Office, an all-too-familiar story.

“Now the FBI wants to know, ‘What does he know?’ If you’re the government and you’re doing nefarious things, you’re going to want to know what he has on you. You give him an immunity agreement to spill his guts. I would caution Montgomery that his immunity agreements are not as ironclad as he wants to believe.”