THE TIMELINE TELLS THE STORY

(Jul. 7, 2019) — In a Friday YouTube broadcast aimed at clarifying an ongoing controversy over the credibility of former NSA and CIA contractor Dennis Montgomery between Dr. Dave Janda and Kevin Shipp, host Jason Goodman interviewed Mary Fanning and Alan Jones, who write at The American Report and claim to have “broken the story” about Montgomery’s claims of widespread government surveillance by means of a super-computer dubbed “The Hammer” (“The Hamr”).

Janda is a former orthopedic surgeon, while Shipp is a former CIA agent who claims to have a mission “to expose the Deep State/Shadow Government.”  Janda and Shipp are at odds over whether or not ‘”The Hammer,” as a “parallel platform” for government surveillance reportedly constructed by Montgomery, exists.

Janda has a subscription platform and additionally broadcasts each Sunday afternoon on WAAM radio.

On June 23, Janda interviewed former NSA officials J. Kirk Wiebe and William Binney, who in 2001 forfeited lucrative careers with the intelligence agency to blow the whistle to Congress and the public about its data-collection of average Americans’ communications without a warrant.  Binney and Wiebe’s claims were supported by revelations made in June 2013 by Edward Snowden, a former CIA contractor now exiled in Russia.

In November 2013, Montgomery approached the Maricopa County Sheriff’s Office (MCSO) with the claim that more than 150,000 Maricopa County residents were victims of bank-account breaches by a government entity. Concerned that a crime might have occurred against his constituents, then-MCSO Sheriff Joseph Arpaio interviewed Montgomery and dispatched one of his detectives, Brian Mackiewicz, and his “Cold Case Posse” lead investigator, Mike Zullo, to do the same to assess Montgomery’s claims.

In August 2011, Arpaio appointed Zullo to conduct an investigation into the authenticity of an image posted on the White House website said to represent Barack Obama’s “long-form” birth certificate from the State of Hawaii. On March 1, 2012, following approximately six months of probing, Zullo announced at a press conference that numerous anomalies led investigators to believe  the image to be a “computer-generated forgery.”

Zullo recorded the interviews among Mackiewicz, Montgomery and businessman Tim Blixseth, who Montgomery reportedly told about “The Hammer.”  In one of those recordings, titled, “Fruit of the Poisonous Tree, Part Two,” Blixseth posited to Zullo, Arpaio and Mackiewicz that he was told that “crimes” were committed against “152,000 victims” in the county. In connection with that, he said, he knew “a guy who’s willing to come down here for a grand jury — he’s got all the evidence and saying who dunnit, but he doesn’t want – he wants immunity of some sort” (7:00).

Blixseth prefaced his statements by accurately reporting that Montgomery had been termed “a con man” by the U.S. government and the media.  “It’s very interesting.  Two things happened:  one, they never made an example out of him or arrested him; two, they hired him back,” Blixseth is heard saying (4:30).

In December 2009, NPR published an article about Montgomery titled “The Man Who Conned The Pentagon.”

“You could indict Brennan and Clapper,” Blixseth further told Arpaio, to which Arpaio responded, “I can’t indict anybody…because that’s a prosecutor’s grand jury. That’s why I’m having trouble with the birth certificate…”

Bixseth met with the group “a few months prior” to their meetings with Montgomery, Zullo told The Post & Email on Sunday. “He contacted me directly about Montgomery.”

Fanning and Jones have referred to the recordings as “the Whistleblower Tapes” and claimed to Goodman that they “broke the story” of the tapes’ contents after U.S. District Court Judge G. Murray Snow “made [them] public.”

On November 15, 2015, The Post & Email published an article reporting:

Arpaio is sheriff of Maricopa County, AZ and was named as a defendant in Melendres, et al v. Arpaio, et al, which alleged racial profiling by members of the Latino community.

As a corollary to a civil contempt charge stemming from Melendres, Arpaio’s office was ordered by U.S. District Judge G. Murray Snow to turn over recordings and other data created and gathered from an investigation conducted by confidential informant Dennis Montgomery over approximately a year.

One of the recordings, released by Stephen Lemons of the Phoenix New Times after being played in court last week, was labeled by Lemons as “Fruit of the Poison Tree,” Part 2, in which billionaire Tim Blixseth initially approached Arpaio about his belief that the hacking of 153,400 bank accounts of Maricopa County residents had been carried out based on Montgomery’s alleged confession to having done so for the CIA.

Blixseth told Arpaio that Montgomery had divulged the existence of a massive computer system called “The Hammer” which was used to gather telephone numbers and breach bank accounts across the country.

The referenced recording is here:  https://soundcloud.com/stephenlemons/fruit-of-the-poisonous-tree-part-one

A screenshot of the Soundcloud file uploaded by Stephen Lemons taken on Sunday, July 7, 2019 indicates that it was uploaded approximately “3 years ago.” 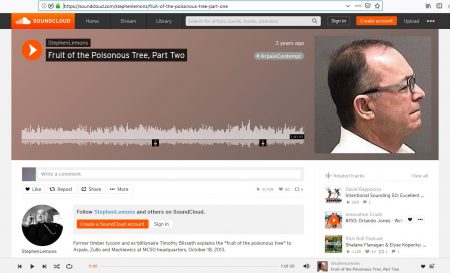 Arpaio ultimately decided to contract with Montgomery as a confidential informant to organize and produce the data he said he possessed relative to government intrusions. Prior to beginning any work for the MCSO, Zullo told The Post & Email late last month, Montgomery provided six thumb drives containing information that proved “verifiable.”

In interviews with “Freedom Friday” host Carl Gallups in 2013, Zullo had indicated that by March or April 2014, he expected to be in a position to release “universe-shattering” information from the birth certificate investigation.  Tapped to oversee the “Seattle operation,” as it was called, Zullo did not publicize Montgomery’s work for the MCSO nor the ongoing birth certificate investigation again until 2015.

It is publicly-known that during the course of the MCSO project, Montgomery suffered a serious stroke or strokes which rendered him incapacitated for a time. According to Zullo, the sheriff’s office continued to pay Montgomery while he was disabled.

As time passed, Zullo consulted with Arpaio about having a professional analysis conducted on data Montgomery additionally produced on 47 hard drives. Arpaio agreed, and in November 2014 Zullo and Mackiewicz drove the hardware, along with the six thumb drives Montgomery initially provided, from Arizona to Maryland to meet with Binney, Wiebe, and Drake as prearranged.

The trio first examined the thumb drives, Zullo said, then proceeded to analyze the hard drives.  Zullo and Mackiewicz were present for the majority of the time, Zullo recalled.

A report dated November 14, 2014 signed by Wiebe and Drake detailing the analysis states that “none of the data examined reveals or otherwise supports the assertion that the data contained on the hard drives examined resulted from the clandestine collection and processing of modern digital network communications and is instead, evidence of an outright and fraudulent con perpetrated on the government for personal gain and cover.”

However, Binney, who did not sign the report, told Janda on June 23 that he recalled from Montgomery’s information an image or images of a bank check. Of that finding, Binney said, “You either have to surveil a transfer of data between banks or you have to hack in to the bank to get it.”

On Friday, Obama birth certificate investigator Mike Zullo was Carl Gallups’s guest on his “Freedom Friday” radio show to discuss revelations made approximately two years ago about extensive government surveillance of U.S. citizens by a former NSA and CIA contractor.

As Zullo and Arpaio were poised late in 2013 to schedule the third press conference early in the coming year, new information was unexpectedly provided to Arpaio by the aforementioned NSA and CIA contractor, Dennis Montgomery.  After a private meeting, Arpaio hired Montgomery to work as a confidential informant to prove his claim that more than 150,000 Maricopa County residents were victims of bank-account breaches by a government entity.

Montgomery worked for Arpaio for approximately a year, during which Zullo provided oversight of the project.  In April 2015, Montgomery’s work, although unrelated to a civil contempt trial in which Arpaio was the chief subject, became a focal point of the presiding U.S. District Court Judge G. Murray Snow.

Fueled at least in part by a June 4, 2014 article in the Arpaio-opposing Phoenix New Times alleging that Montgomery was perpetrating a conspiracy theory that Snow and the U.S. Department of Justice were seeking to destroy Arpaio’s career, Snow ordered all of Montgomery’s work product turned over to the monitor Snow had appointed to oversee the MCSO through the underlying civil action, Melendres, et al v. Arpaio, et al.

On March 14, 2017, Fanning contacted this writer with questions.  The American Report’s first mention of “Dennis Montgomery” is dated March 17, 2017.

On multiple broadcasts with Gallups and elsewhere, Zullo has maintained that despite continuously-evolving narratives and the “con man” label, Montgomery produced some useful material to the sheriff’s office and “has a story to tell.”  “Part of the investigator’s job is to sift through the lies and find the truth, and there is some truth to what Montgomery said and the information he provided. It’s being borne out in the news today; what you’re reading about today we knew about in 2013 and 2014,” Zullo told us on June 20.

Editor’s Note:  Please look for Part 2 of this series in which Zullo provides responses to the claims made in the Goodman broadcast.

Zullo on “The Hammer,” Dennis Montgomery and Changing Narratives added on Sunday, July 7, 2019