“THERE WAS NO COLLUSION & MUELLER KNOWS IT!” 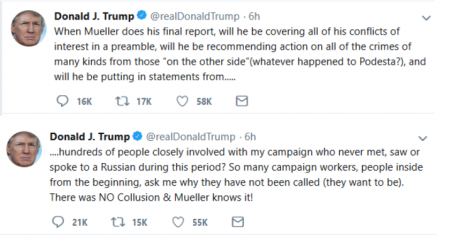 (Nov. 26, 2018) — On Monday morning, President Donald Trump said for the first time that members of his 2016 presidential campaign “want” to speak with Special Counsel Robert Mueller, who has been looking into allegations of “collusion” with Russia by the Trump presidential campaign.

When Mueller does his final report, will he be covering all of his conflicts of interest in a preamble, will he be recommending action on all of the crimes of many kinds from those “on the other side” (whatever happened to Podesta?), and will he be putting in statements from hundreds of people closely involved with my campaign who never met, saw or spoke to a Russian during this period? So many campaign workers, people inside from the beginning, ask me why they have not been called (they want to be). There was NO Collusion & Mueller knows it!

Thus far, in a February 2018 grand jury indictment of 16 Russians or Russian-controlled entities stemming from Mueller’s work, none has cited “collusion” as the alleged crime, but rather, election interference.  One of the entities hired an American law firm for its defense, and it is unlikely that the others will ever be tried in an American courtroom given that no extradition agreement exists between Russia and the U.S.

In July, an additional dozen “Russian intelligence officers” were “charged with conspiring to infiltrate computers of organizations involved with administering elections, including state boards of election, secretaries of state, and companies that supply software used to administer elections” as announced by Deputy Attorney General Rod Rosenstein.

According to former U.S. Attorney Joseph DiGenova in September, Rosenstein is himself under investigation.

Earlier on Monday, former Trump foreign-policy advisor George Papadopoulos was required to report to a federal prison in Wisconsin to serve 14 days for his admission of having lied to the FBI during questioning early last year about his interactions with Russians during the 2016 campaign. Over the last month or more, Papadopoulos has tweeted and given more than a half-dozen interviews in which he has said that had the FBI divulged certain exculpatory information, he would not have accepted a “guilty” plea as he did in September.

Late Monday morning, author and program host Dr. Jerome Corsi reportedly told CNN and other mainstream outlets that Mueller offered him a plea deal on one count of perjury stemming from his lengthy interrogation by Mueller’s prosecutors about email releases by WikiLeaks in the months leading up to the 2016 election. Corsi stated that he refused to sign the agreement because he is not guilty of lying.

The mainstream media has made much of the fact that Corsi is an acquaintance of longtime Trump ally Roger Stone, who has said in a number of interviews and written communications that while he had a “back channel” to WikiLeaks during 2016, he had no foreknowledge of the content or timing of the emails WikiLeaks would release which would prove highly damaging to Hillary Clinton’s campaign.

Trump has previously made it clear that he believes the Mueller probe to be nothing other than “a witch hunt” and that neither he nor any of his campaign aides communicated with Russia to win the election.  He has frequently questioned why Clinton and her campaign associates did not become a focus of Mueller’s attention given that her campaign, in coordination with the Democratic National Committee (DNC), commissioned the private company Fusion GPS to produce a “dossier” of opposition research on Trump which was ultimately used to obtain surveillance warrants on then-Trump campaign advisor Carter Page.

Extensive reportage by investigative journalist Sara A. Carter and others has revealed that some at the Justice Department and FBI were communicating with the author of the dossier, British citizen Christopher Steele, both before and after the election, and that Steele was adamantly anti-Trump.  The contents of the dossier, released in response to a FOIA lawsuit filed by the open-government organization Judicial Watch, show that the FBI and Justice Department were attempting to make the case that Page was an “agent of the Government of Russia, a foreign power.”

Approximately 20 pages of the evidence presented to the court remain classified.

Page has not been charged with the crime and has claimed publicly that neither the FBI nor Justice Department ever approached him for questioning.

Papadopoulos has said that he was “framed in many ways” as in early 2016, at least six individuals with whom he was unacquainted approached him with offers of highly-placed connections and at the same time, in retrospect, appear to Papadopoulos to have planted the information that “the Russians” possessed compromising information on Clinton.

The claim made to the FBI by then-Australian Ambassador to the UK Alexander Downer that Papadopoulos shared that information with him became the basis of the FBI’s counterintelligence probe into the Trump campaign, assumed by Mueller after FBI Director James Comey was fired on May 9, 2017.

Trump has previously said that in the past, Mueller and the Trump Organization conducted business together, which to Trump constitutes a conflict of interest undisclosed by Mueller. Some legal analysts believe that as a professional colleague of both former FBI Director James Comey and Rosenstein, Mueller was an inappropriate choice to serve as Special Counsel.

Rosenstein, for his part, signed the fourth and final FISA warrant on Carter Page attesting to the validity of the evidence presented to the FISA court, the Steele “dossier.” Prior to the midterm elections Rosenstein was twice scheduled to testify to two House committees about a September New York Times article which claimed that in 2017, Rosenstein was secretly attempting to undermine the Trump presidency.