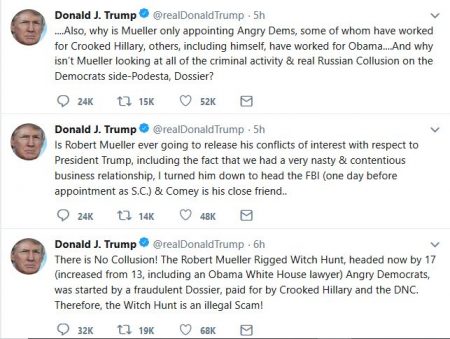 (Jul. 29, 2018) — On Sunday President Trump again expressed his frustration at what he has claimed for months is a matter of undisclosed conflicts of interest on Robert Mueller’s part while he is serving as Special Counsel to investigate Russian “meddling” and possible “collusion” with the Trump campaign.

However, Sunday’s tweet provided more information as to why Trump believes that Mueller is conflicted outside of the fact that Trump interviewed Mueller for the position of FBI director the day before Deputy Attorney General Rod Rosenstein appointed him Special Counsel.

“Is Robert Mueller ever going to release his conflicts of interest with respect to President Trump, including the fact that we had a very nasty & contentious business relationship, I turned him down to head the FBI (one day before appointment as S.C.) & Comey is his close friend..,” Trump tweeted at approximately 4:00 p.m. EDT.  As he has been known to do in the past, he referred to himself in the third person.

Rosenstein, who some members of the House of Representatives moved to impeach last week before quickly backtracking before leaving for their August recess, has drawn ire from many members of Congress for failing to provide subpoenaed documents relating to a number of investigations.

Rosenstein, Mueller and former FBI Director James Comey are all acquainted from having worked within the Justice Department at various times in their careers.

In scores of tweets since Mueller was hired in May of last year, Trump has referred to the prosecutorial team Mueller hired as “13 angry Democrats.”  A majority of the attorneys assisting Mueller have donated to Democrats, with none reportedly donating to Republicans over the years.  Several on Mueller’s team worked in the Obama Justice Department.

Last December Politico reported that Mueller was required to sign an “ethics waiver” in order to assume the role of Special Counsel.

On Sunday the mainstream media took note of Trump’s tweet, which was the second in a series about the Russia investigation.  While The Hill published Trump’s tweets about Mueller, it also wrote of Mueller, “but it’s unclear if Trump turned him down for the position before he was named special counsel in May 2017.”  The paper described Trump’s allegation of “a very nasty & contentious business relationship” as “lashing out” at Mueller.

Some have suggested that the Mueller probe is unconstitutional and/or illegal, that Rosenstein is threatened by the Trump presidency, or that the “Deep State” is concerned that Trump will uncover its corruption if he remains in the White House.