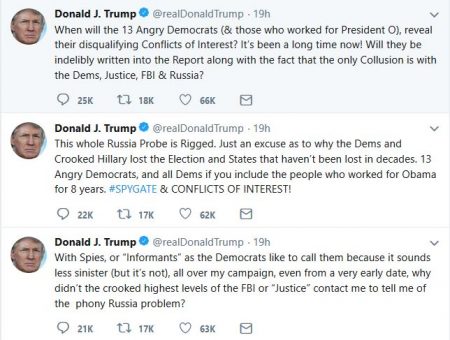 (May 27, 2018) — On Saturday afternoon, President Donald Trump again tweeted his frustration with the “Russia” probe led by former FBI Director Robert S. Mueller, III; the “conflicts of interest” he alleged of the prosecutors Mueller hired to assist him; the reported use by the FBI of “Spies, or ‘Informants'” against his campaign, and his claim that “the only Collusion is with the Dems, Justice, FBI & Russia.”

In December, Politico reported that Mueller himself had to obtain an “ethics waiver” under an “authorization” in order to assume the role of “Special Counsel” in the investigation, which also seeks to determine the extent to which Russian activity impacted the 2016 election.

Allegations of “collusion” between the Trump campaign and Russian operatives dogged the transition period and continue to affect Trump’s presidency, although Trump has used Twitter to protest what he regularly calls a “witch hunt.”  Since December 2016, sensitive intelligence information, transcripts of Trump’s telephone calls with world leaders, and statements made in private White House meetings have been leaked to the mainstream media by “sources” who virtually always remain unnamed.

Trump has often referred to 13 of the 17 prosecutors on Mueller’s team as “Angry Democrats” because of their past positions in the Obama regime or their political donations made over the years.

Trump also appeared to support the claim of former campaign aide Michael Caputo, who last week told Fox News that there were multiple “informants” who approached the Trump campaign to collect or offer information, including him. “With Spies, or ‘Informants’ as the Democrats like to call them because it sounds less sinister (but it’s not), all over my campaign, even from a very early date, why didn’t the crooked highest levels of the FBI or ‘Justice’ contact me to tell me of the phony Russia problem?” Trump tweeted on Saturday of what he now calls “Spygate.”

Interestingly, that question came following a Friday night interview by Obama birth certificate investigator Mike Zullo, who told “Freedom Friday” host Carl Gallups that had the FBI truly suspected illegal activity between Trump aides and Russia, it would have contacted Trump through official channels, advised him of its suspicions, and placed, with Trump’s assent, an undercover agent within his campaign to conduct an investigation.

Earlier this month, The Washington Post and The New York Times admitted to a single “informant” interacting with the Trump campaign.  Last Tuesday, former Director of National Intelligence James Clapper claimed the “spy” was attempting only to determine if Russians were seeking ways to influence the Trump campaign in the midst of the FBI’s alleged suspicion of Russia “collusion” and that Trump should be grateful for those alleged efforts.

On Friday Clapper told CNN, where he is a paid commentator, that he was “sure” that former White House occupant Barack Hussein Obama had no knowledge of the dispatching of the FBI’s “informant” to the Trump campaign.

In the first tweet of Saturday’s series, Trump did not say what the “very early date” of the alleged placement of “spies” in his campaign might have been.  However, the FBI’s claim that its counterintelligence probe was launched in late July 2016 has been refuted by several reports which appear to substantiate that contact with Trump aides by at least one FBI “informant” occurred much earlier.

To the public’s knowledge, no one has investigated the known connections between Hillary Clinton’s campaign, the DNC and Russia, which include payment through a prominent law firm to Fusion GPS to former British MI6 agent Christopher Steele, who collected damaging information on Trump from his Russian “sources” to comprise the now-infamous and unsubstantiated “dossier.”

In early January, the Senate Judiciary Committee referred Steele to the U.S. Justice Department for possible criminal prosecution based on his testimony in a British court which differed from statements he made to the FBI regarding whether or not he had contact with U.S. media about the dossier.

The 35-page compilation of allegations was used as a primary source of evidence to obtain surveillance warrants on Trump foreign-policy advisor Carter Page between October 2016 and June 2017, well into Trump’s first year in office. Some order Republicans in Congress have claimed that the unverified contents of the dossier were not revealed to the Foreign Intelligence Surveillance Court (FISC).

In early March of last year, Trump tweeted unexpectedly that his campaign had been “wiretapped,” a claim the mainstream media immediately ridiculed and described as “without evidence” despite The New York Times’s having reported that “wiretapped” information was collected on the Trump campaign on Inauguration Day.

In a tweet on Saturday, Trump decried the “lives” of people who he said have left the nation’s capital “in tatters” as a result of the “phony Russia Collusion Witch Hunt.”

Trump may have been referring to his former campaign aide, 27-year-old George Papadopoulos, who was reportedly approached by FBI “informant” Stefan Halper on what may have been a pretext and later assumed a guilty plea as a result of the Mueller investigation.

In an appearance on “Hannity” several weeks ago, Caputo, who is in his 50s, said his legal bills, stemming from three depositions he was asked to provide to Mueller’s investigators, would exceed $300,000.  A Legal Fund launched at GoFundMe currently shows $322,598 raised, much of it after that appearance on Hannity’s show.

Finally, late on Sunday morning, Trump tweeted two rhetorical questions: “Why didn’t the 13 Angry Democrats investigate the campaign of Crooked Hillary Clinton, many crimes, much Collusion with Russia? Why didn’t the FBI take the Server from the DNC?”  As he frequently has in the past, Trump concluded with his description of the Mueller probe as a “Rigged Investigation!”

His questions referred to the Clinton-Steele-Russia connections and mainstream media reports claiming that the DNC server was breached in 2016 by Russian-government operatives who then allegedly handed thousands of incriminating emails to Wikileaks.

Wikileaks founder Julian Assange has denied receiving the emails from any “state party” or Russia specifically.

In January 2017 Comey testified, and other sources have confirmed, that the FBI did not examine the DNC server to determine the source of the breach or breaches which led to the release of the emails.  Instead, the DNC hired the private firm Crowdstrike, which stated in its report that Russian operatives were responsible.

New Zealand Internet entrepreneur Kim Dotcom has claimed to “know” the source of the breach and to have been personally “involved.” Through his legal team, he has offered to testify to Mueller, his designee, or to Congress but has reportedly never received a response from Mueller.