Trump Suggests New Information to be Revealed about Mueller’s Investigators 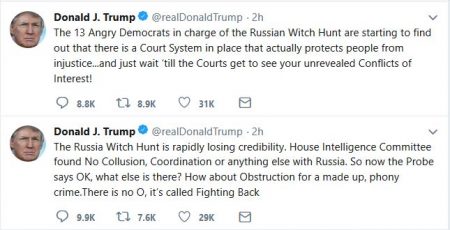 (May 7, 2018) — In tweets issued at approximately 7:15 AM on Monday, President Donald Trump, as he often has in the past, referred to Special Counsel Robert S. Mueller III’s investigation into Russian “collusion” as a “witch hunt,” while adding that the “Court System actually protects people from injustice…”

On Friday, U.S. District Court for the Eastern District of Virginia Judge T.S. Ellis made startlingly brazen remarks to one of Mueller’s prosecutors, Michael Dreeben, in a case against former Trump campaign advisor Paul Manafort claiming that Mueller sought the prosecution, which arose from actions predating the 2016 campaign, with the intent of “impeaching” Trump.

Also on Friday, a Trump-appointed federal judge, Dabney Friedrich, refused to grant Mueller’s request for a delay in an initial hearing scheduled for Wednesday in the indictment of 13 Russian individuals and three Russian organizations which allegedly attempted to influence the 2016 presidential election both in favor of and against Trump and were indicted in February by a grand jury.

Referring to 13 attorneys who Mueller chose to assist him in his probe as “Angry Democrats,” Trump then tweeted, “… just wait ‘ill the Courts get to see your unrevealed Conflicts of Interest!”

According to a June 11, 2017 report from CNN, Dreeben gave $1,000 to Democrats in 2006, although The Washington Post reported on January 4 that Dreeben “has made no political donations.”  The Post refuted Trump’s June 23, 2017 assertion to Fox & Friends that “The people that have been hired are all Hillary Clinton supporters. Some of them worked for Hillary Clinton” while admitting that “It now turns out that eleven members of Mueller’s team have made political donations to Democrats, compared to five with no record of such donations. Five of the 16 known members — Rhee, Quarles, Freeny, Prelogar and Atkinson — contributed to Hillary Clinton’s 2016 campaign.”

Many attorneys, some of whom are former US attorneys, as well as political pundits have criticized the Mueller probe as having exceeded its scope of authority and utilized attorneys already biased against the Trumpet administration.

Others, primarily Democrats but also some Republicans in Congress, have advocated for allowing Mueller to complete his two-pronged “Russia” probe undisturbed.

Trump Suggests New Information to be Revealed about Mueller’s Investigators added on Monday, May 7, 2018