“IT WASN’T A BOTCHED ROBBERY AT ALL” 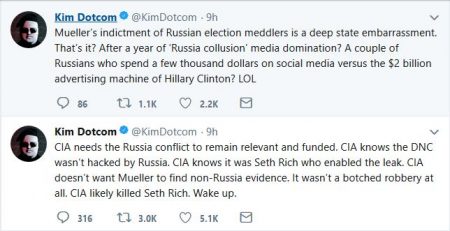 (Feb. 25, 2018) — Late on Saturday night in the Eastern time zone, New Zealand resident and internet entrepreneur Kim Dotcom tweeted that the U.S. Central Intelligence Agency (CIA) is aware that the leaking of thousands of emails from DNC servers in 2016 was not a product of Russian operatives, as has been publicly reported.  Rather, Dotcom said, “CIA knows it was Seth Rich who enabled the leak.”

Rich was a 27-year-old DNC employee working as “voter expansion data director” when he was shot twice in the back on July 10, 2016 on his way home from a bar.  His murder remains unsolved and has been characterized as a “botched robbery attempt” by the Washington, DC Metro Police Department despite the presence of Rich’s valuables on his person when EMTs arrived.

Multiple rewards totaling more than $300,000 have been offered by a number of entities, with no actionable information apparently having been submitted as a result.

Dotcom has said on numerous occasions over the last nine months that Rich and he were “involved” in securing the DNC emails and in some way forwarding them to the open-government organization Wikileaks, which began releasing them in batches just prior to the DNC convention in July 2016.

Twice before, Dotcom claimed that Rich used a “memory stick” to download the emails from the DNC’s servers.

The emails showed that the DNC clearly favored Hillary Clinton over Sen. Bernie Sanders during the Democratic primaries. Some of the emails also revealed DNC officials’ condescending attitude toward certain groups of Democratic voters.

Interestingly, rather than investigating Dotcom’s claims, the U.S. mainstream media has pushed back against them, insisting, without presenting any evidence, that Rich could not possibly have been involved in the DNC “hack.”

Rich’s family, too, has insisted that their son and brother played no role in the clandestine obtaining and release of the uncomplimentary emails which Clinton herself attributed, in part, to her loss of the 2016 presidential election.

In May of last year, Dotcom publicly threatened to file a lawsuit against the Rich family for impugning his reputation, after which nothing more appeared to have been issued by either side.

As with the determination by a five-year criminal investigation that the long-form birth certificate image posted at whitehouse.gov in 2011 is a “computer-generated forgery,” the idea that Seth Rich was involved in the intrusion into the DNC servers has been characterized by the media as “a conspiracy theory.”  The media has ridiculed and marginalized anyone questioning the public narrative that Rich’s death came about as a result of an attempted robbery, including Fox News host Sean Hannity and former Speaker of the House Newt Gingrich.

Hannity’s plans to host Dotcom on his FNC show to speak about the Rich case were jettisoned after left-leaning media outlets launched a boycott of the show’s advertisers.

Rep. Dana Rohrabacher, who met with WikiLeaks founder Julian Assange last August and is convinced that Russia did not “hack” the DNC servers, told Hannity last September that “When we realize…that Russia was not involved in hacking or stealing those emails from the Democratic National Committee and having them disclosed, once you know the Russians weren’t involved, then we have to understand that this massive propaganda campaign, this historic con job that happened after the election to prevent our president from exercising the powers granted him by the voters, this is one of the great crimes, political crimes, against the American people in our history [sic].”