HANNITY TO HOST INTERNET ENTREPRENEUR CLAIMING TO HAVE “EVIDENCE” IN CASE

(May 21, 2017) — While awaiting President Trump’s speech from Riyadh, Saudi Arabia today on the Fox News Channel, former Speaker of the House Newt Gingrich raised the unsolved murder of a “young man” working for the Democrat National Committee (DNC) while discussing generally the responsibilities of the FBI, for which a new director nominee is expected to be named soon.

Without mentioning the name, Gingrich indicated that it appears to him that the murder of the staffer was not a robbery, as has been maintained in the mainstream press.

As The Post & Email reported on Saturday, many left-leaning media outlets have excoriated Fox News Channel and a Washington, DC Fox affiliate, Channel 5, for airing reports strongly suggesting that Seth Rich was in contact with the open-government organization Wikileaks.

On Friday, Internet entrepreneur Kim Dotcom claimed to have evidence that Rich was a source for Wikileaks. “I was involved,” he tweeted in response to Fox News Channel host Sean Hannity’s tweeted questions.

Hannity aired segments on the story last Tuesday and Friday. 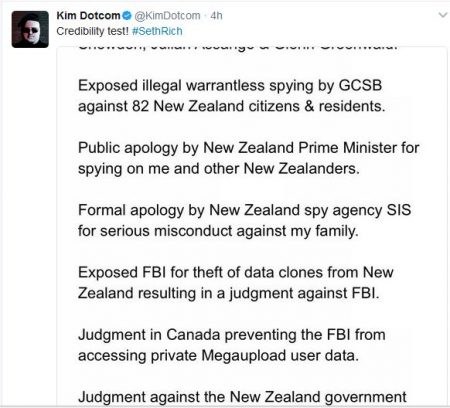 Dotcom’s Wikipedia biography appears to corroborate his claims regarding surveillance by the New Zealand government.

“…Fifty-three thousand emails and 17,000 attachments…Nobody’s investigating that. What does that tell you about what was going on? because it turns out it wasn’t the Russians; it was this young guy who I suspect was disgusted by the corruption of the Democratic National Committee.  He’s been killed and apparently, nothing serious has been done to investigate his murder. So — and — I’d like to see how Mueller is going to define what his assignment is, and if it’s only narrowly Trump, the country will not learn what it needs to learn about foreign involvement in American politics,” Gingrich said to the three Fox & Friends co-hosts, referring to former FBI Director Robert S. Mueller III, who was last week appointed to to act as “Special Counsel” in the ongoing investigation into whether or not Russia interfered in the 2016 U.S. elections.

Gingrich’s reference to “emails” and “attachments” appears to have been drawn from a Fox News report by Malia Zimmerman on May 16 in which Zimmerman reported having spoken to a “federal investigator” who allegedly told her, “I have seen and read the emails between Seth Rich and WikiLeaks.”

“He said the emails are in possession of the FBI, while the stalled case is in the hands of the Washington Police Department,” the article further reported of the investigator.

According to other media reports, the Washington, DC Metropolitan Police Department (MPD) has denied any claim of stonewalling the investigation. However, Zimmerman reported that the MPD has provided no response to her inquiries about the case over the last ten months since Rich was killed.

In a tweet issued on Sunday, Dotcom said he would be meeting with his attorneys regarding his ongoing legal case involving both New Zealand and the US Department of Justice and would issue a statement about the Rich case on Tuesday.

In a tweet on Sunday, Hannity announced that he will be hosting Dotcom on both his radio and television shows, although he did not say when.

Rich’s family, through a spokesman representing a public-relations company championing “progressive” messaging, has said it has seen “no evidence” that their son was in communication with WikiLeaks.  “Legal action” has reportedly been suggested as a measure to compel media outlets, including FNC and Fox5, to remove their reportage.

The Gateway Pundit has posted the video of Gingrich’s comments.