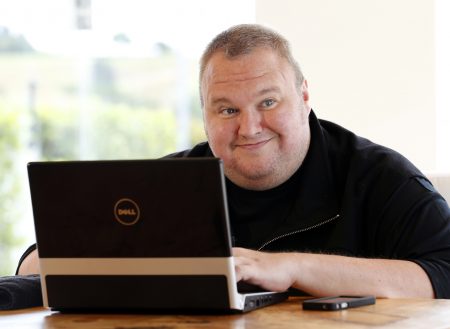 (Aug. 10, 2017) — On Thursday morning, New Zealand internet entrepreneur Kim Dotcom issued a tweet in response to a lengthy article published at The Nation contending that the alleged Russian “hack” of the DNC server in the spring of 2016 was actually “a leak.”

“It wasn’t a hack. It was a DNC insider with a memory stick. Or how a ‘conspiracy theory’ became reality,” Dotcom wrote in his tweet.

A memory stick is a storage medium for computer data.

In May, Dotcom came forward to state on his website and on Twitter that he possessed first-hand, personal knowledge that murdered DNC staffer Seth Rich was the provider of thousands of incriminating emails from the DNC server to the open-government organization WikiLeaks.

WikiLeaks’ founder, Julian Assange, has all but said that Rich was one of his sources. Soon after Rich’s death on July 10, 2016, Assange offered a $20,000 reward for information leading to the apprehension of the perpetrator(s).

Although the U.S. intelligence community has said that Russian-government operatives were to blame for the DNC breach, Assange has said that no “state party,” including Russia, was his source.

During sworn testimony on June 8, terminated FBI Director James Comey admitted that the FBI had never been permitted to conduct a forensic examination of the DNC server.

The DNC has not offered a reward or made a statement on Rich’s murder, characterized as a “botched robbery” by the DC Metro Police Department despite Rich’s valuables remaining on his person.

After Dotcom made his pronouncement in the spring, the mainstream media attempted to impugn his reputation because of an open extradition request by the United States stemming from allegations of wire fraud and copyright infringement connected with Dotcom’s now-defunct Megaupload website.

Dotcom maintains his innocence in the case while remaining under house arrest in New Zealand and fighting the U.S. charges and extradition represented by a team of attorneys.

Dotcom has admitted to hacking into computer systems in his past, for which he received suspended sentences in Germany, his country of birth.

In late May, Dotcom issued an open letter to the Rich family threatening to file suit for defamation after The Washington Post published an article quoting Rich’s father which strongly implied that Dotcom was the source of a phishing email sent from what appeared to be a “Mega” email account. “Mega.nz” is one of Dotcom’s latest Internet endeavors, of which there have been many.

The letter appears to have been taken seriously.

The Post, in particular among virtually all mainstream outlets, has attempted to marginalize the theory that Rich could have been the leaker of the DNC emails.

Sean Hannity immediately showed interest in Dotcom’s Twitter claims, pledging to have him as a guest on both his radio and Fox News Channel shows.  That expectation was jettisoned after left-leaning media began a boycott of Hannity’s FNC advertisers and the Rich family reportedly objected to the airing of the story on television.

After a week of coverage beginning on May 16, Hannity announced that he would remain quiet on the case but suggested he would continue to investigate it.

On June 1, Hannity floated the idea of having Dotcom host his radio show, to which Dotcom responded, “It would be an honor.”

As with the issue of Barack Hussein Obama’s long-form birth certificate, anyone who has explored the possibility that Seth Rich might have been the leaker of the DNC emails which WikiLeaks began to publish on July 22, 2016 has been ridiculed and maligned by the mainstream media and its sycophants.

Obama’s birth certificate image, posted on the White House website on April 27, 2011, was found to be fraudulent by a five-year criminal investigation which included the concurrence of two forensic analysts working separately. The media has consistently refused to conduct its own investigation on those findings.

The more than 17,000 emails eventually published by WikiLeaks showed that then-DNC chairman Debbie Wasserman Schultz and other party leaders agreed to prevent then-Democrat presidential candidate Bernie Sanders from receiving the presidential nomination, even if he garnered more votes than former Secretary of State Hillary Rodham Clinton.

Just prior to the opening of the Democrat National Convention, Wasserman Schultz was forced to resign her position, along with several other party officials. Her replacement, Donna Brazile, also ultimately admitted to having provided at least two townhall topics to Clinton in advance while working as a commentator and DNC deputy chairman.

Brazile now is a columnist at the once-vaunted TIME Magazine, where she offered her regrets for having provided Clinton the advance information.

On Tuesday, an article appeared in The Los Angeles Times strongly suggesting that a May 16, 2017 Fox News article in which it was alleged that a federal investigator had confirmed that evidence on Seth Rich’s computer did, in fact, show that he communicated with WikiLeaks could delay or derail 21st Century Fox’s intended acquisition of the British media company Sky.

Regulators are reportedly also considering the numerous claims of harassment made against Fox News Channel hosts and its late founder, Roger Ailes.

Although the LA Times writer stated later in the article that the Fox News story was not specifically cited as having come under scrutiny by British media regulators, the title said something different. The Fox-Sky proposed merger has been under consideration for some time and was attempted unsuccessfully several years ago.

The Los Angeles Times did not mention Dotcom’s claims which include the statements, “I knew Seth Rich. I know he was the @Wikileaks source. I was involved.”

On May 30, Dotcom’s attorneys sent a letter to Special Counsel Robert S. Mueller, III offering to make their client available to testify in person, on guarantee of safe passage to and from the United States, as to the evidence he claims to possess relating to Mueller’s “Russia” investigations. Mueller has provided no response to date, according to Dotcom.

In his tweet on Thursday, Dotcom provided the first specific as to how the DNC emails were allegedly obtained from the DNC server.