“SCREAMING AND SHOUTING AT PEOPLE” 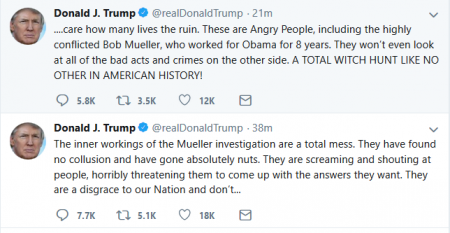 (Nov. 15, 2018) — After a months-long silence on the matter, on Thursday President Donald Trump again expressed his displeasure with the “Russia collusion” probe overseen by Special Counsel Robert Mueller for the last 18 months which has resulted in the indictment, trial and conviction of his former campaign manager, Paul Manafort, and plea deals for several other Americans.

Trump on Thursday also criticized the way the probe is allegedly being conducted, claiming that Mueller and his team of prosecutors are “horribly threatening” people who have come under questioning about possible “collusion” with Russians during the 2016 campaign cycle.

“The inner workings of the Mueller investigation are a total mess,” Trump tweeted. “They have found no collusion and have gone absolutely nuts. They are screaming and shouting at people, horribly threatening them to come up with the answers they want…”

Last Thursday, Dr. Jerome Corsi suggested on his webcast that he expected to be indicted and possibly imprisoned in the very near future as a result of his testimony to the federal grand jury impaneled to hear evidence pertaining to Mueller’s investigation. On Monday, Corsi told his audience that the questioning he underwent by Mueller’s team was intimidating and “frightening.”

On Wednesday night, investigative journalist Sara A. Carter said on “Hannity” that her sources have suggested that both Corsi and former Trump advisor and longtime friend Roger Stone will be indicted, but not for collusion.  Both Stone and Corsi have denied any wrongdoing.

Shortly before the November 6 elections it was reported that the Mueller probe is winding down.

Trump has long insisted that Mueller has undisclosed conflicts of interest based on business he conducted with the Trump Organization years ago. On Thursday morning, Trump additionally invoked Mueller’s service during the Obama regime as a source of conflict.  He then repeated his oft-voiced opinion that the Mueller probe is “a total witch hunt,” adding the superlative, “LIKE NO OTHER IN AMERICAN HISTORY!”

Trump claimed the investigation is “ruining lives” and that Mueller and his prosecutors “won’t even look at all of the bad acts and crimes on the other side,” a clear reference to the Hillary Clinton campaign/DNC’s hiring of Fusion GPS to commission an unverified Russia “dossier” which became the main evidence submitted to the Foreign Intelligence Surveillance Court (FISC) to obtain surveillance warrants on Dr. Carter Page.

Page was an informal foreign-policy advisor to Trump in 2016 and was never charged with a crime.  however, another former adviser, George Papadopoulos, was indicted in early 2017 and accepted a plea deal which he is now reconsidering. Papadopoulos has recently tweeted that he is certain he also was the subject of a FISA warrant in 2016.

Papadopoulos further maintains that the 20 pages of still-classified documents associated with Page’s warrants contain the proof that he and other Trump associates were under formal surveillance by the FBI during the final year of the presidential campaign.

Some legal analysts agree that not only is Mueller conflicted, but also Rosenstein, as his signature appears on the fourth and final FISA warrant for Page, signed in June 2017 while Rosenstein served in the Trump administration.