“THEY SAY THEY’RE GOING TO CRIMINALLY INDICT ME” 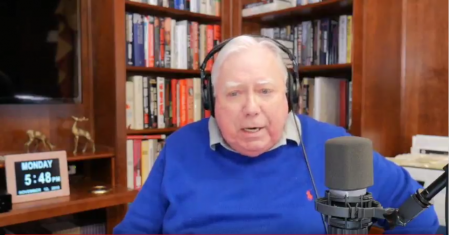 (Nov. 12, 2018) — Although unsure if he would host “CorsiNation,” at the close of his Thursday show, Dr. Jerome Corsi hosted his show on Monday.

During Thursday’s broadcast, Corsi quoted heavily from the Bible and indicated that on Friday he would be meeting with his attorney, who has represented him since he received the first of two subpoenas from Special Counsel Robert Mueller’s team regarding the Trump-Russia investigation.

Reportedly Corsi has testified twice to the grand jury Mueller empaneled to examine evidence pertinent to the probe into alleged Russian “collusion” and interference in the 2016 election.

Corsi and longtime political strategist Roger Stone have come under increased scrutiny as to whether or not either had foreknowledge of the content, timing and source of the Hillary Clinton-related emails WikiLeaks released prior to the 2016 presidential election.

He did much of the same on Monday.  However, at 5:30 p.m. EST, after mentioning the challenge he is facing from Mueller, he diverted to ask rhetorically, “Do you get a Bible in solitary confinement?”

As he said on Thursday, Corsi promoted and quoted from a book titled, “Jesus & Company” by Bruce Hartman and urged his followers to read it.

“This is a critical period in time right now,” Corsi said at 5:38 about the incoming Democrat majority in the House of Representatives and its possible consequences for Donald Trump.  He spoke about a possible “confrontation” at the southern border with the “caravan” traveling through Mexico from Honduras for the last four weeks determined to enter the U.S.

Corsi shifted topics by stating that “The criminals are running the Justice Department,” referring to Deputy Attorney General Rod Rosenstein.  He welcomed the departure of Attorney General Jeff Sessions.

He urged Americans to lend their support to Trump if Democrats attempt to impeach him as they have indicated.

Corsi mentioned his involvement with Mueller’s probe, claiming that he “has nothing to hide.” As he did on Monday, he made several apocalyptic references to “prison.”

At 5:47, Corsi indicated that he believes Mueller perceives him as not having given “enough” during questioning.  He also said that all of his communications are being “monitored by the Justice Department,” including his webcasts.

He said “a war” is coming because Democrats want to do away with the Constitution and install communism.

He expressed no confidence in the current U.S. election system and ballot integrity in light of developments in Florida and elsewhere.

At 5:53, Corsi said, “They say they’re going to criminally indict me.”

The broadcast can be viewed as a podcast and is here:  https://www.youtube.com/watch?v=qVNl5m8V4UM

3 Responses to "Dr. Corsi Returns to Host Show on Monday"