“HE CAN’T DO FISAS ANYMORE” 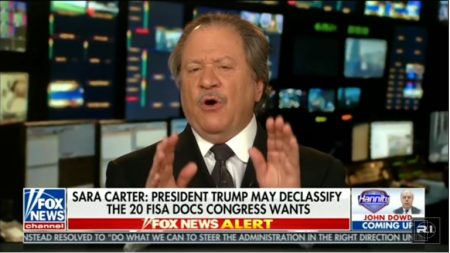 According to documentation received by the Justice Department by Judicial Watch late last week, the court conducted no hearings on its several applications to surveilled Page between October 2016 and June 2017. JW had requested transcripts of any and all hearings and in its response, the DOJ said that none exist.

The House Intelligence Committee, among others, has been attempting to discover why the FBI launched a counterintelligence investigation into the 2016 Trump campaign, including whether or not it was politically-motivated. The FBI probe was opened within days of the closing of the agency’s probe into Hillary Clinton’s use of a private email server while she was Obama’s Secretary of State between 2009 and early 2013.

On Tuesday night’s “Hannity,” investigative reporter Sara A. Carter, who also appeared on Wednesday night’s show with Di Genova, said that 20 pages of documentation withheld from Judicial Watch and the House Intel Committee and signed by Rosenstein, will likely become public this week, perhaps after Trump declassifies them.  Those documents are said to have been withheld from the FISC in the Carter Page warrant applications and known to be “exculpatory.”

In his appearance, di Genova said that Rosenstein “has got a big problem with FISA, personally. He’s now under investigation and he can’t do FISAs anymore.”

When Hannity asked for more information, di Genova responded, “Rosenstein is under investigation for things that involve the FISA warrant.”  He later added that DOJ Inspector General Michael Horowitz is conducting the probe.  “That’s what I know and I’m happy to say it,” he said.  “It’s a tragedy for where the Department is.”

Rosenstein has been overseeing the “Russia” investigation, led by Special Counsel Robert Mueller for the last 15+ months, due to Attorney General Jeff Sessions’s recusal.

Di Genova called for Congress to “demand” a federal grand jury investigation into “all of the FISA processes…which involved lying to the FISA court.”

Unless contained in the extensive redacted sections of the FISA applications, the FBI and DOJ did not inform the FISC that its main piece of “evidence” against Page, the now-infamous “dossier” obtained by former British spy Christopher Steele at the behest of the DNC and Hillary Clinton campaign, was politically-motivated.

Di Genova opined that once the withheld information is made public, the American people will be stunned at the level of corruption within the DOJ which allegedly allowed it to attempt to thwart Donald Trump’s presidency.