(Sep. 5, 2018) — On Tuesday this writer sent a comment to the office of Sen. Richard Blumethal (D-CT) regarding the conduct of Senate Judiciary Committee Democrats toward Chairman Charles Grassley (R-IA) which began seconds into his opening remarks in the confirmation hearings for U.S. District Court of Appeals for the District of Washington, DC Judge Brett M. Kavanaugh.

This writer did not retain a copy of the sent email, as she indicated no response was requested nor expected.

On Tuesday afternoon, the following response came from Blumenthal’s office: 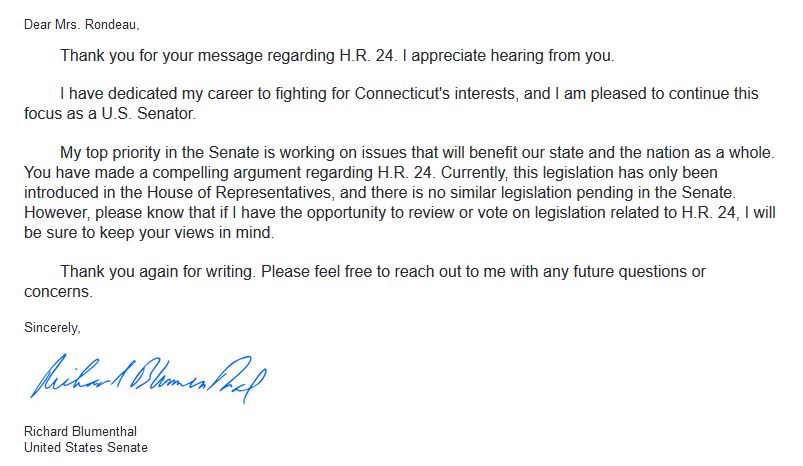 On Wednesday morning, we received a second response which reads:

Our communication did not touch on whether or not Kavanaugh is qualified nor any decisions he might make if confirmed to the Supreme Court by the U.S. Senate through the “advice and consent” clause of Article II, Section 2 of the Constitution.

It did, however, recount that Blumenthal unequivocally supported a “president” with a birth certificate and Selective Service registration form found to be fraudulent by a criminal investigation.  To that, there was no response.

5 Responses to "Blumenthal Responds to Comment on Kavanaugh Hearings…"