Did the FBI Tell the Truth to the FISA Court?

The FISC is authorized by the Foreign Intelligence Surveillance Act of 1978, which expanded on the 1968 “Wiretap Act.”

The first surveillance warrant was requested in October 2016.  Although referring to Page as an “agent of the Government of Russia, a foreign power,” he has not been charged with a crime and maintains his innocence of any wrongdoing.

“Source #1” is likely former British MI6 agent Christopher Steele, who commissioned unknown sources of his own to assemble the now-infamous Russia “dossier” submitted to the FISC as evidence of “collusion” between members of the Trump campaign and the Russian government.  The “identified U.S. person” is likely Glenn Simpson, founder of Fusion GP, and the “U.S.-based law firm” is Perkins Coie, which paid Fusion to commission the dossier.

Perkins Coie was also involved in the procuring of the alleged “long-form” birth certificate of Barack Hussein Obama later found by a criminal investigation, as well as two court-certified forensic analysts, to be a “computer-generated forgery.”

In early January, Steele was referred to the Justice Department for criminal investigation by Republicans on the Senate Judiciary Committee based on his apparent dishonesty with the FBI, which had once considered him a “reliable” source of information as stated in the page 15 footnote.

Information available to the reader in the FISC applications does not appear to include the dossier’s connection to the DNC, which partially funded the dossier and was represented by Perkins Coie in 2016. Similarly, the Hillary Clinton presidential campaign provided funds for the production of the dossier, another fact not provided to the FISC.

Dozens of pages in the newly-released documents are completely or partially redacted, particularly from the middle to the last pages.

On page 108, the FBI acknowledged that it found “Source #1” to be compromised based on his/her “reporting” “to an identified news organization.”  The media outlet, Yahoo! News, was sued by Page for defamation, although the case was dismissed in March. 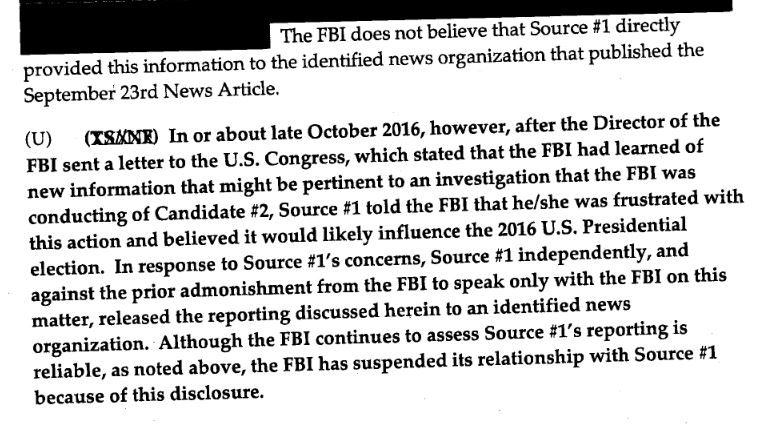 Page 160 shows an application signed by Comey in January 2017, with blank signature lines appearing for various other Obama administration officials, including at the Department of Defense (DOD) and State Department.

In between the substantial redactions on page 127, the FBI told the court that it claimed “that there is probable cause to believe that such activities [in which Page was allegedly involved] involve or are about to involve violations of the criminal statutes of the United States,…”

At one point trending fourth on Twitter on Saturday, “Carter Page” has trended downward, then slightly upward, as of press time. 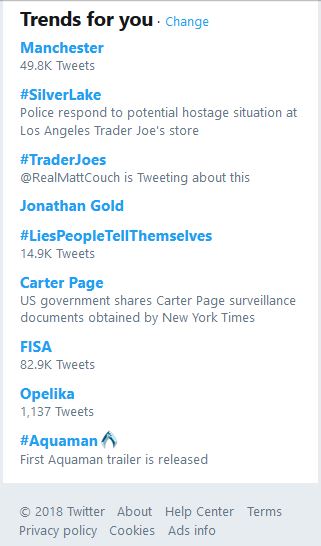 Some discussing the release on Twitter appeared to believe that congressional Republicans’ claims that there was no “collusion” between the Trump campaign and the Kremlin are now discredited.  Many appeared to consider the documents an indictment of sorts, perhaps unaware that the FBI has itself provided inaccurate and false information in sworn affidavits in order to obtain arrest warrants.

Page indicated that he will be a guest on CNN’s “State of the Union” hosted by Jake Tapper on Sunday morning along with Tapper’s confirmation of the interview.

It is unknown how many other individuals’ conversations were captured in the FBI’s continued monitoring of Page over the course of a year, well into Trump’s first year in office.

The Justice Department and FBI reportedly continue to stonewall Nunes’s committee and several others in their production of subpoenaed documents associated with the Russia, Clinton email server, and FBI/DOJ political-influence investigations.

Trump has in the past, and continued on Saturday evening, to call the “Russia” investigation delegated to Special Counsel Robert Mueller “a witch hunt” carried out by “13 angry Democrats,” referring to Mueller’s choice of prosecutors after he was brought in to lead the investigation in May of last year. 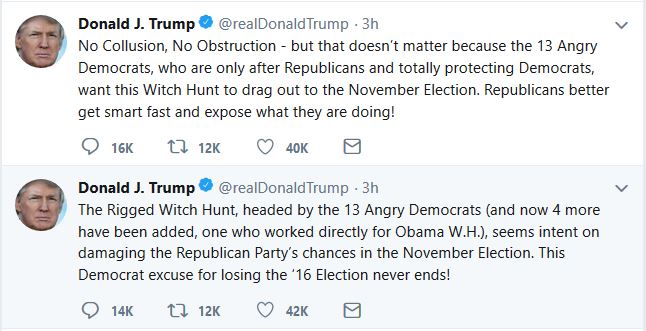 In addition to The New York Times, Judicial Watch also requested and received the documents.

One Response to "Did the FBI Tell the Truth to the FISA Court?"