“SEE YOU ON THE OTHER SIDE” 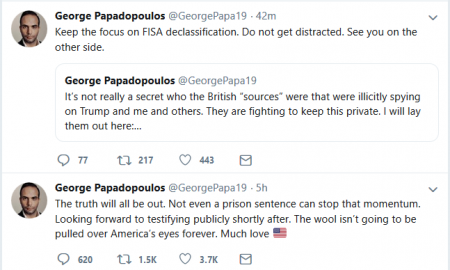 (Nov. 25, 2018) — On Sunday evening, former Trump foreign-policy adviser George Papadopoulos urged his Twitter followers, who number nearly 74,000, to “not get distracted” and “Keep the focus on FISA declassification.”

His advice referred to the anticipated release of approximately 20 classified pages which President Trump indicated he wished to make public in September but then reconsidered, asking the Justice Department’s inspector general to review them first.

The documents are expected to reveal more about the FBI’s actions and decisions in 2016 leading up to the presidential election, and specifically, why the agency requested four successive FISA warrants on Carter Page.

Like Papadopoulos, Page was a volunteer foreign-policy adviser to the Trump campaign.  Another similarity between the two, Papadopoulos has said of late, is that both were the subjects of FISA warrants in 2016, a claim not confirmed by any other party as of yet.

The FBI requested and obtained four FISA warrants to collect Page’s communications beginning in October 2016 through June 2017, well into Trump’s first term and long after Page no longer served the campaign in any capacity.

Page has not been charged with a crime nor accused of wrongdoing.  He currently has an active lawsuit filed against the Democratic National Committee (DNC) for alleged defamation.

In September, Papadopoulos accepted a plea deal with the FBI encompassing 14 days in federal prison, a $9,500 fine, 200 hours of community service and a year of “supervised release.”  Over the last 30 days, however, he suggested he might withdraw the plea as a result of new information he said he learned which he said the FBI should have divulged during its questioning of him.

On Saturday, media reports said that U.S. District Court Judge Randolph D. Moss refused Papadopoulos’s request to extend his time on bail as a related case which could impact his status awaits adjudication.

In early 2016, Papadopoulos was living in London and working in the energy industry when he was approached by what he said were a half-dozen individuals purporting to possess valuable contacts with important industry Russians as well as intelligence suggesting that unnamed “Russians” had obtained “dirt” on Hillary Clinton.

The first such reported contact, Joseph Mifsud, is now said by his attorney to have been working for the FBI when he approached Papadopoulos in March 2016 about a meeting in Rome.  During the meeting, Papadopoulos said, Mifsud claimed that Russian operatives possessed damaging information on Hillary Clinton.

Papadopoulos has implicated the UK and Australian governments in allegedly attempting to thwart Trump’s presidential aspirations and spurring the opening of an FBI counterintelligence operation into the campaign.  That came about, Papadopoulos has said, when in May 2016, then-Australian ambassador to the UK Alexander Downer allegedly issued a warning to him at London’s Kensington Wine Rooms to cease any criticism of then-UK Prime Minister David Cameron and for Trump to do the same.

Papadopoulos’s Twitter timeline contains entries which name the individuals he said were involved in the plot to create the illusion that the Trump campaign was “colluding” with Russians to win the presidential election.

In the first of three tweets, the second of which was issued earlier in the weekend, Papadopoulos wrote on Sunday, “The truth will all be out. Not even a prison sentence can stop that momentum. Looking forward to testifying publicly shortly after. The wool isn’t going to be pulled over America’s eyes forever. Much love

Last month, Papadopoulos testified to members of the House Judiciary and Oversight & Government Reform Committees about the occurrences in 2016 which he now believes were the FBI’s attempt to “frame” him.

After Papadopoulos reportedly told Downer during their bar meeting that “the Russians” possessed damaging information on Clinton, the FBI launched its probe into the Trump campaign.  Some members of Congress appear convinced that there was no actual intelligence upon which the FBI based its decision.

Papadopoulos has said he has no recollection of speaking to Downer about anyone’s emails, but Downer has told The Australian that it was a topic of discussion.

In May 2017, Special Counsel Robert Mueller assumed the “collusion” probe one week after Director James Comey was fired.  Mueller was also tasked with exploring to what extent Russia had allegedly interfered in the 2016 U.S. elections.

Mueller had asked that Papadopoulos receive up to six months in prison.

The probe has seen more than a dozen Russians indicted by a federal grand jury as well as several Americans.  However, none of the Americans were indicted for election “meddling” or “collusion.”

Trump has called the Mueller operation “a witch hunt” and denied all “collusion” claims. On Twitter Trump has been vocal about what he believes are Mueller’s conflicts of interest in serving as Special Counsel, including former business dealings he reportedly had with the Trump Organization.

According to The Washington Post and other sources, Papadopoulos must report to prison on Monday.

“See you on the other side,” Papadopoulos concluded his thoughts on Sunday evening.