(Feb. 27, 2018) — On Monday, The Post & Email published the first article in what will be a series detailing encounters between Athens, TN resident Walter Francis Fitzpatrick, III and two officers in the Monroe County Sheriff’s Office (MCSO) last Friday morning.

Prior to moving to Athens in February 2012, Fitzpatrick lived in Monroe County dating back to 2007. He was jailed on a number of occasions by then-MCSO Sheriff Bill Bivens after attempting to expose corruption within the local grand jury, sheriff’s office, local police, Tennessee Bureau of Investigation (TBI) and Knoxville office of the FBI.

The catalyst to his initial arrest was his April 1, 2010 attempt to place the Monroe County grand jury foreman under citizen’s arrest, as state law (TCA 22-2-314) prohibits any member of the grand jury from serving consecutive terms.  In September 2009, Fitzpatrick inadvertently discovered that in Tennessee, criminal court judges are permitted to hand-pick the grand jury foreman and retain them for whatever time frame the judges wish, the 2008 law cited above notwithstanding. As of early 2010, Fitzpatrick was able to determine that Gary Pettway had been serving for two decades as grand jury foreman, although he later discovered that Pettway actually served for 28 consecutive years.

The practice dates back to at least 1919, when the Tennessee legislature passed a law allowing criminal court judges to select the grand jury foreman in that way despite its unconstitutionality.  The U.S. Supreme Court condemned Tennessee judges handpicking grand jury foremen in 1979 and 1987, and yet, the practice continues to this day, along with numerous other constitutional violations.

Fitzpatrick is not alone in his claim that corruption in Monroe County has deprived citizens of their right to due process under the Fifth Amendment. The Post & Email has interviewed a number of local citizens who claimed that they or their loved ones were framed, arrested without cause, denied due process, and put through a sham trial resulting in a conviction and jail or prison time. With government-influenced grand juries, there is no doubt that the system is “hopelessly corrupt,” as an attorney for Fitzpatrick in 2010 opined.

Police brutality, particularly on the part of MCSO deputies, has also been credibly reported and corroborated, both within the county jail and externally.

Fitzpatrick has visited the Knoxville office of the FBI on multiple occasions to relate the lawlessness of government in East Tennessee but been spurned.

On April 20, 2010, Fitzpatrick was scheduled for a preliminary arraignment hearing stemming from the citizen’s arrest and his own subsequent arrest.  From April 1-6, Fitzpatrick was detained in the Monroe County jail, an edifice he termed “the dungeon.” A new “Justice Center” is now under construction and will include a new jail, Fitzpatrick informed us in our interview Sunday.

As related in Monday’s article, Fitzpatrick visited the MCSO on Friday morning after learning that Bivens, who lost his bid for reelection in 2014, is again seeking the office of sheriff this year. Bivens served two full terms in that capacity between 2006 and 2014 and was therefore in office on April 20, 2010, when the Monroe County government seat and small town of Madisonville was teeming with federal, state, county, and local law-enforcement officers for no discernible reason.

For nearly eight years, Fitzpatrick and other eyewitnesses have insisted, some through sworn affidavits, that “nothing happened” on that day in Madisonville requiring the overwhelming police presence which included snipers on a number of building roofs, SWAT teams, helicopters flying overhead, pole-mounted gigapixel panoramic cameras, and bomb-sniffing dogs which were used on the person and vehicle of Darren Wesley Huff.

Huff left his Georgia home early that morning to attend Fitzpatrick’s hearing. Several Tennessee Highway Patrolmen and other unknown police officers stopped Huff outside of Sweetwater (miles away from Madisonville) for allegedly running a stop sign, a claim Huff and other witnesses denied. The THP advised Huff to lock his legally-owned firearms in the toolbox in the bed of his truck before traveling on, which he did in their presence; the police allowed Huff to continue on to Madisonville.

Without bothering to approach the courthouse, Huff and a friend, former Marine Sgt. William Looman, patronized Donna’s Old Time Café two-tenths of a mile from the courthouse, where they dined and conversed with others until Fitzpatrick arrived.

“No law enforcement official approached any citizen that morning for any reason.  There was no reason to approach. Every expectant court-watcher conducted themselves civilly, peacefully, and courteously among themselves, in no way posing a threat by any description to other people or property,” Fitzpatrick recalled of that day.

No one was observed carrying a weapon of any type or kind.  No arrests were made, nor were any individuals found to be threatening members of law enforcement or the community.  Local media portrayed the event in terms of an averted catastrophe while providing no photographic evidence of anyone actually posing a threat.

On Friday morning, Fitzpatrick located a sheriff’s deputy, R. Moses, who said he was present in Madisonville that day on the second floor of the courthouse in a lookout position.  According to Fitzpatrick, Moses freely admitted to Fitzpatrick that nothing untoward occurred, terming the huge police turnout and preparations as “good for training.”

The costs, individuals responsible, and logistical planning for deploying an inordinate number of FBI agents into Madisonville on April 20, 2010 have never been made public, as neither the FBI nor the U.S. Justice Department would release documents in response to The Post & Email’s FOIA request submitted in March 2012. The FBI initially said it possessed no documentation about the event, while the Justice Department, upon our appeal, admitted that it possessed documentation but refused to release it due to “privacy” concerns. 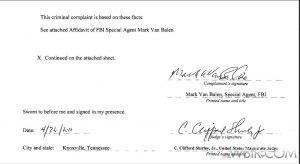 Fully ten days after Fitzpatrick’s hearing, on April 30, 2010, Huff was arrested and charged with two federal firearms violations based on a sworn affidavit from FBI Special Agent Mark Van Balen, which contained a plethora of errors and perjured claims. Huff’s public defender at the time, G. Scott Green, failed to call any exculpatory witnesses to Huff’s trial, which ultimately resulted in Huff’s acquittal on one charge and conviction on the other, but only after presiding Judge Thomas A. Varlan remonstrated what was a hung jury, sending them back to the jury room to secure Huff’s conviction.

An inmate in the Monroe County jail at the time, federal marshals transported Fitzpatrick to the federal courthouse to testify at Huff’s trial. However, Green did not call Fitzpatrick to the witness stand.  Neither Looman nor other known eyewitnesses with knowledge of Huff’s whereabouts that day were subpoenaed, while Bivens and Pettway testified against Navy veteran Huff.

Green is now a judge in Knox County Criminal Court.

Huff spent three and one-half years in federal prison, suffering significant financial and personal losses during that time. Toward the end of his sentence, he revived his childhood talent of color drawings of animals, insects and other items from nature, although it is unclear if he has pursued it since his release in April 2015.

Fitzpatrick termed the false-flag event in Madisonville “The Madisonville Hoax” for which he holds Robert S. Mueller III personally and professionally responsible as then-director of the FBI.

Fitzpatrick has long said that Huff was a “political prisoner” of the Obama regime.  Fitzpatrick himself is reviled by certain of Obama’s supporters for having filed a formal treason complaint against Obama on March 17, 2009 after Obama’s army deployed into Samson, Alabama on a law-enforcement mission in violation of the Posse Comitatus Act.

Those same supporters long ago admitted to their role in The Madisonville Hoax by phoning in false reports to then-Madisonville Mayor Allan Watson’s office claiming that Huff and Fitzpatrick intended violence on April 20, 2010.  “Obama supporters sounded false alarms in government offices all over East Tennessee warning that I was coming in armed, with trained militias (plural) to take over the courthouse where my hearing was scheduled,” Fitzpatrick said.

Also contended in Fitzpatrick’s treason complaint was that Obama is a “foreign born domestic enemy,” a reference to Obama’s unknown origins, allegiance and nationality, questions which in some Americans’ minds loom large as the result of a criminal investigation finding that Obama’s “long-form” birth certificate and Selective Service registration form are undoubtedly fraudulent.

In relating his Friday encounter with Sheriff’ Deputy Moses, Fitzpatrick said that Moses’s admission is the first confirmation Fitzpatrick has received from a public official, an eye-and-ear-witness, that, in fact, “nothing happened” in Madisonville on April 20, 2010.

Prior to his conversation with MCSO Deputy R. Moses, Fitzpatrick spoke with Capt. Chris White, who said he personally was not serving in the agency in 2010. Fitzpatrick related the events of The Madisonville Hoax, including the filing of Van Balen’s false affidavit in federal court in Knoxville.

In response, White claimed that the MCSO did not have “jurisdiction” to reopen the matter.  Fitzpatrick said he countered with, “This affidavit details alleged events that happened just feet from here.”

White then said that a “statute of limitations” on Fitzpatrick’s allegations might apply to his claims against Van Balen and Bivens for his role in it.

Fitzpatrick retorted: “Darren Huff and I are still demonized as ‘domestic terrorists.’ Darren Huff, an innocent man, suffers the burden of a bogus federal conviction to this day. These crimes are ongoing.”

On Sunday Fitzpatrick informed The Post & Email that on Saturday, he mailed a package of materials to White containing:

Fitzpatrick also sent the information to White by email, whose email address is on his business card, and to certain members of the Tennessee Republican Party.