“WE HAVE THE EVIDENCE” 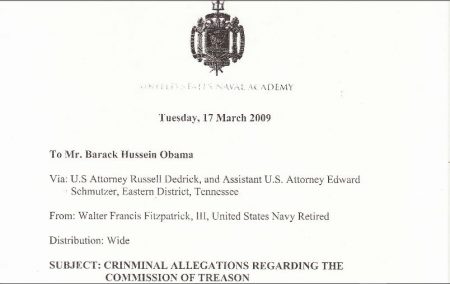 (Mar. 6, 2017) — On March 17, 2009, LCDR Walter Francis Fitzpatrick, III (Ret.) filed a written complaint of treason against Barack Hussein Obama as a “foreign born domestic enemy” who he said had “broken in and entered the White House by force of contrivance, concealment, conceit, dissembling, and deceit.”

On Sunday, Fitzpatrick said that the charge of treason against Obama is still viable for the same reasons expressed in his complaint eight years ago and amplified by Obama’s “use of police force in connection with military force” against the newly-elected president, Donald Trump.

Fitzpatrick refiled the treason complaint with two Department of Justice officials on Friday.

In light of Trump’s claim made on Saturday that the Obama regime wiretapped his office at Trump Tower before the election, Fitzpatrick said:

We’ve talked about corrupt military commanders for a very long time.  [Former CIA Director John] Brennan and [former Director of National Intelligence James] Clapper are military officers, and they both are working against Mr. Trump as information is emerging.  We’ve talked about Gen. Martin Dempsey back in the day when he was complicit in sending military troops into Samson, AL under Obama.

Obama is working with military officers to destroy the Constitution, and that was one of the focused comments that was made in the treason complaint of March 17, 2009.  The military commanders who tried to stand up to him were cashiered.  There are admirals and generals still in the military now who are Obama advocates.  We saw the tip of the iceberg in 2009 when Obama tried to assign a mission of civilian policing by the United States Armed Forces.

The Army’s own inspector general found that the law was broken in that operation.

I’ve been trying to take this to a grand jury but have been blocked at every step.  One of the ways I was blocked was to have me falsely arrested and convicted of a crime I didn’t commit.

In the meantime, Keith Olbermann says that a grand jury should look at Mr. Trump.  I don’t think so.  Olbermann has not filed a sworn criminal complaint.

Obama is responsible for everything that’s happening in the aggregate.  It has been treason since Day One.  There needs to be someone to come in and actually enforce the law, which means to place Obama under arrest.

[Editor’s Note:  A petition for a Writ of Certiorari filed on Fitzpatrick’s behalf asked if a citizen could be criminally charged with “extortion” for petitioning his government for redress of grievances but was rejected for a hearing by the U.S. Supreme Court last year.]

Petition for Writ of Cert 4.2

All of these things are now coming together, and Obama is doing the exact same thing now, out of office, in a seditious, treasonous way, as he was before.

It’s all out there.  These complaints are real.

There was a report filed on Friday to all of those federal agencies.

Now President Trump is in a position to move on this.

Between what we know about Extortion 17 and other occurrences, there are a lot of things that could be testified to in front of a grand jury.  The way to take care of this is to put Mr. Obama and these other people under arrest.

Admiral Mike Rogers was like Gen. Ham and Adm. Gaouette and said to Mr. Trump, “These guys are coming after you, and this is how they’re doing it.”  He alerted Mr. Trump to the treason.  And they tried to get Mike Rogers fired from the NSA.

I’m looking at a report on the Drudge Report that says, “Dems Smell Blood in the Water” which should say, “The Dems are running for cover.”  You click on that and see Schumer going on all the talk shows saying, ‘Trump’s in trouble.”  Well, no, he’s not.  They are doing the best they can to run interference against law enforcement activity taken against Barack Hussein Obama, Valerie Jarrett, Dianne Feinstein, Keith Olbermann, Maxine Waters…we have the evidence to have Mr. Obama arrested and prosecuted on so many issues…and Hillary Clinton and Loretta Lynch, who came out in a video today saying, “We need more blood in the streets.”

Eight years ago, the Democrats were frantic about Obama being exposed for his treason, and now they’re using this tactic against President Trump.  The reason they did that is that the complaint is legitimate; I have standing; I’ve always had standing, and they needed to do everything they could to destroy me and worked at that very assiduously and were successful.  So now they’re trying to spew this nonsense against Mr. Trump, who has not committed treason at all.

Olbermann is using tactics against President Trump which were legitimately exercised against Mr. Obama eight years ago in commission of treason and so many other crimes.  And now you see that Mr. Obama has taken up residence in Washington, DC and is now caught in attacking President Trump by advancing all of these stories about alleged connections with the Russian government.  And Valerie Jarrett has taken up residence with the Obamas, and they’re running it out of Obama’s house.  They’re trying to take down Attorney General Jeff Sessions, who can act on complaints filed by people like me.

We need [FBI Director James] Comey to come out and put Clinton and Obama under arrest.

Mr. Obama knew about the wiretap on Trump.  You can’t be unaware of a wiretap on someone who’s running for the presidency to replace you.  You do not keep something like that secret.

There is the former Secret Service agent who is going to come out with information on Obama this week.  The Secret Service knows about Obama.  When they visited me back in March of 2009, Agent McAmis admitted, “We know about Obama.”

Trump would not make the accusation unless he knew it happened.  There is now a situation where a former president days out of office can be brought up by presentment or indictment on criminal charges. And my treason complaint is still actionable, because what Obama was accused of doing then is what he’s accused of doing now.  He is a foreign-born domestic enemy.

We need to throw Obama in prison, and other people along with him.  This has to stop.

8 Responses to "Fitzpatrick: Treason Complaint Against Obama is “Still Actionable”"