CNN’S RESPONSE:  “PRESIDENT OBAMA WAS BORN IN THE UNITED STATES” 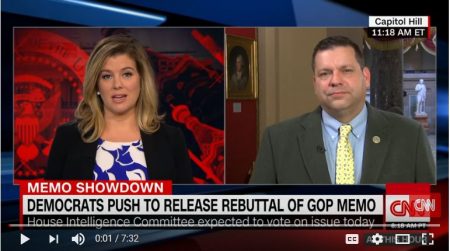 (Feb. 6, 2018) — In an interview with CNN’s Brianna Keilar on Monday about the Republican-authored “FISA memo” released on Friday, Rep. Tom Garrett Jr. (R-VA) likened the allegations into Trump/Russia “collusion” to a hypothetical politically-motivated investigation into Barack Hussein Obama’s “birthplace.”

The four-page memo, authored by Republicans on the House Permanent Subcommittee on Intelligence (HPSCI), reports that high-ranking officials within the Justice Department and FBI knowingly submitted incomplete and misleading information to the Foreign Intelligence Surveillance Court (FISC) in Washington, DC in 2016 to obtain a wiretap warrant on then-Trump campaign informal foreign-policy adviser Carter Page.

According to the memo, there were four FISC applications signed off by top officials at the FBI and its parent agency, the DOJ.

Trump said after the memo’s release that its contents completely “vindicated” him of any alleged wrongdoing.

Garrett responded that he has read the Democrat response memo which has not yet been approved for declassification and would like to see it, too, released to the public “with appropriate redaction to protect sources and methods.”

The interview touched on whether or not the FISA court was informed that Trump “dossier” author Christopher Steele “was paid by a political operative.”

Steele was commissioned by the political research firm Fusion GPS to “investigate” Trump’s alleged ties to Russia during the 2016 campaign.  Funding came from Hillary Clinton’s campaign and Fusion GPS through the Democrat-allied super-law firm Perkins Coie, which also defended Obama in a number of lawsuits challenging his constitutional eligibility and seeking release of his original birth certificate.

Despite conflicting narratives dating back to 1990 regarding Obama’s background and/or birthplace, anyone questioning Obama’s claim that he was born in Hawaii has been labeled a “birther” and became the target of unceasing ridicule from the media, political pundits, and Obama supporters.

Interestingly, Perkins Coie was also the law firm which reportedly dispatched Judith Corley, Obama’s then-personal attorney, to the Hawaii Department of Health (HDOH) on or about April 24, 2011, in order to obtain two certified copies of his original birth certificate. Three days later, an image said to be a scan of one of the certified copies was posted on the White House website but quickly declared a forgery by a number of analysts.

Garrett said he also wants the FISC court application released.  “Imagine if political money – $9 million from the Clinton campaign and the DNC to Fusion GPS were levied to do an investigation against President Obama as to his origin of birth — that would be ridiculous and un-American, and this is, too,” Garrett said.

“Why do you equate the two?” Keilar asked.  “President Obama was born in the United States…”

Keilar presented Garrett with a clip of HPSCI ranking member Adam Schiff contending on ABC’s “This Week” on Sunday “that the court was notified a political actor was involved,” while also stating that the “FISA application” was “misleading.”

On Monday night on “Hannity,” HPSCI Chairman Devin Nunes said in an exclusive interview that there was a “footnote” on the FISC application alluding to possible “political” motivation on Steele’s part but that the reference was not sufficient to provide the court with full disclosure of the dossier’s origins.

Just before the 5:00 mark, Keilar said that Special Counsel Robert Mueller is attempting to find whether or not  members of the former Trump presidential campaign possessed “nefarious intent” or carried out “obstruction of justice” in their alleged contacts with individuals associated with the Kremlin.  “I guess I don’t understand why you’re equating ‘birtherism’…with this Russia investigation…” she concluded.

Garrett responded that Page and others may have conducted legal business interactions with Russian representatives and pointed out that former Trump campaign manager Paul Manafort was indicted for an unrelated alleged offense.  Manaford has pleaded “not guilty” and filed a lawsuit claiming that Mueller has overreached his authority.

“I’m confident that Adam Schiff is being less than forthright,” Garrett said in regard to Schiff’s claim about the FISA court application.

Neither Keilar nor Garrett mentioned the 5+-year criminal investigation into the birth certificate image conducted under the authority of the Maricopa County, AZ Sheriff’s Office (MCSO) which found it to be “definitely fraudulent” made public “with the intent to deceive.”

Contrary to that which CNN and others in the mainstream media have reported, the investigation did not focus on Obama’s birthplace.

Neither a congressional nor FBI investigation of any stripe has been conducted into the conclusions of former detective Mike Zullo, who stated at a final press conference on December 15, 2016 that two well-known forensic analysts concurred with his conclusion that the long-form birth certificate image posted at whitehouse.gov is a “computer-generated forgery.”