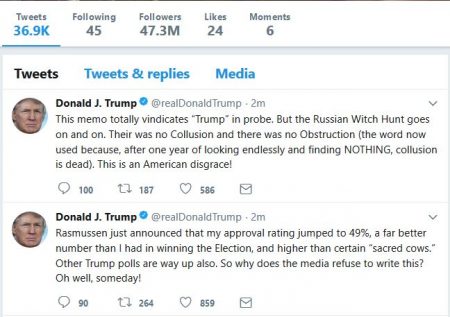 (Feb. 3, 2018) — In the second of two tweets issued at approximately 9:40 AM EST on Saturday, President Donald Trump opined that the much-anticipated “FISA memo” released just after noon on Friday “vindicates” him in a reference to the “Russian collusion” investigation currently led by Special Counsel Robert S. Mueller, III.

The initial tweet stated that Rasmussen Reports, believed by Trump and some pundits to be the most reliable political polling entity, reported Trump’s approval rating among “likely U.S. voters” at 49% on Friday.

Rasmussen also said that as of Friday, an equal number disapprove of the president’s performance.  Last Monday, Rasmussen posted Trump’s approval rating at 43%.

In the tweet specific to the investigation, Trump refers to himself in the third person, which he did at times during the campaign.

In regard to the “Russia” investigation, Trump again called it a “witch hunt” and claimed that since no “collusion” has come to light over the last year, the Special Counsel’s direction has now shifted to “obstruction.”

“This is an American disgrace!” Trump punctuated the second tweet, echoing his comment made at the White House just after the release of the memo as he met with North Korean-regime defectors, the plight of whom he highlighted during his State of the Union speech on Tuesday.

The 3+-page FISA memo, authored by Republican members of the House Permanent Subcommittee on Intelligence (HPSCI), alleges that current and former high-ranking DOJ and FBI officials applied on multiple occasions for a surveillance warrant on at least one Trump campaign member to the secretive FISA court in Washington, DC using the “Trump dossier” assembled by former British intelligence agent Christopher Steele as a basis.

Unknown to most Americans even as the Russia investigation has unfolded since July 2016 is that the dossier was funded by the Democratic National Committee (DNC) and the Hillary for America campaign, with the prominent politically-oriented law firm Perkins Coie acting as a middleman.  Steele assembled the documentation allegedly from Russian sources which remain unidentified.

The memo claims that the judge or judges sitting on the FISA court reviewing the surveillance applications were not informed that the contents of the dossier were unverified.

The memo released yesterday claims that Steele expressed a distinct animus toward the prospect of Trump’s election and his determination to see that it did not happen, despite his being a British citizen and ineligible to vote in U.S. elections.

Perhaps ironically, another prong in the Russia investigation is that Russia allegedly interfered in the 2016 election and assisted Trump to win over the American-media-favored Clinton.

Congressional Democrats have accused Republicans of omitting crucial information from the memo, approving its release despite its being a threat to national security, and “destructive.”  The Democrat minority on the HPSCI has reportedly written its own ten-page memo for which it is seeking review and release upon its anticipated declassification, mirroring the process through which the Republican-offered FISA memo passed.

In an interview with Fox News’s Bret Baier on Friday night, HPSCI Chairman Devin Nunes accused Democrats of dishonesty and the DOJ and FBI of being “unwilling to admit they have problems” and cooperate with congressional subpoenas for documents over nearly a year.

Nunes has said that more memos associated with the committee’s investigation into “FISA abuse” are forthcoming.

On Thursday morning, House Minority Leader Nancy Pelosi called for Nunes’s removal from his chairmanship by Speaker of the House Paul Ryan, but Ryan declined to act upon her request.

The FBI in DOJ opposed the release of the memo, claiming on Wednesday that they had “grave concerns about material omissions of fact that fundamentally impact the memo’s accuracy.”  Earlier in the week, however, Fox News’s Catherine Herridge reported that after completing its initial review of the memo, the FBI “could not cite any factual inaccuracies” in it.

Since its release, Judicial Watch’s president, Tom Fitton, opined that the memo makes the case that Mueller and his investigation are unnecessary given that the foundation of the “collusion” allegations was the dossier itself.

Democrats disagree and are demanding that Mueller be allowed to complete his assignment.

Mueller was hired on May 16, 2017 by Deputy Attorney General Rod Rosenstein, who is named in the memo as having applied for a FISA surveillance warrant renewal with the dossier as its basis.

Page has filed, and said he now plans to update, two lawsuits, one each suing The Huffington Post and Yahoo! News for defamation.

Boente was recently chosen by FBI Director Christopher Wray as the agency’s Special Counsel.  According to The Washington Post, as U.S. Attorney for the Eastern District of Virginia until last October, Boente’s office “has assisted in the probes of Hillary Clinton’s emails and possible coordination between the Kremlin and the Trump campaign.”

Despite having reportedly told Trump that he was not under investigation and that the dossier was “salacious and unverified,” in January of last year, Comey reportedly requested three surveillance warrants on Page based on the dossier.

Trump fired Comey on May 9, and Rosenstein brought in Mueller one week later.

In sworn testimony a month later, Comey admitted that the dossier was the catalyst for the FBI’s counterintelligence investigation into allegations of “Russian collusion” with the Trump campaign.

Some are now suggesting that Wray resign or be fired.

As a businessman and reality-television star in the popular NBC show “The Apprentice,” Trump would brusquely tell contestants, “You’re fired!” as they were eliminated from consideration for the high-powered position for which they were vying.