DID CRUZ EVER HAVE TO AFFIRM U.S. CITIZENSHIP?

(Feb. 23, 2016) — Since March 23 of last year, when Sen. Ted Cruz declared his presidential candidacy, The Post & Email has been researching his background in a way that was not done on the current Oval Office occupant, Barack Hussein Obama, during the 2008 and 2012 presidential campaign cycles.

Rather than verifying Obama’s claims about his unusual childhood and his education, claimed citizenship and employment prior to entering politics, the media declined to perform any investigative research, and the Obama campaign released virtually no documentation about its candidate.

With his featured speech at the 2004 Democrat National Convention, Obama rose from being an Illinois state senator to U.S. Senator-elect later that year.  In 2006, after approximately a year in the Senate, Obama denied rumors of presidential aspirations, yet in February 2007 declared himself a candidate for the 2008 election.

Cruz attended Princeton University and Harvard Law School.  His attendance at Princeton is confirmed through archived newspaper articles reviewed by The Post & Email which note him as the leader of Princeton’s Debate Club who sometimes spoke with the press.

A written request sent to Harvard and Princeton for Cruz’s applications dated February 8, 2016 has not yet received a response.  In the same letter to Harvard Law, The Post & Email also requested Obama’s application forms.

Circumstantial statements from Columbia graduate Wayne Allyn Root and others indicate that Obama was an unknown at Columbia, although just after the 2008 election, the student newspaper claimed that certain “classmates” recalled Obama arriving early to class with “a red backpack” a quarter-century earlier.

Article II, Section 1, clause 5 of the U.S. Constitution requires that the president be a “natural born Citizen.” 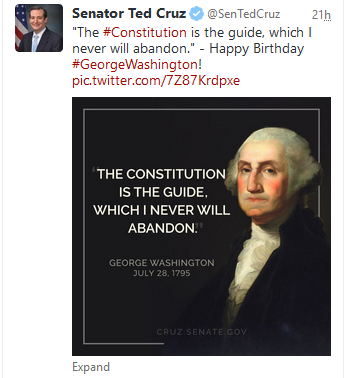 Cruz has claimed to be a strong supporter of the Constitution to include limited government and Second-Amendment rights.  On Monday, in recognition of George Washington’s birthday, Cruz tweeted a quote of Washington’s stating, “The Constitution is the guide, which I never will abandon.”

It has been reported that Obama was a “constitutional law professor” at the University of Chicago’s Law School, although the school’s website describes him as a “Senior Lecturer.”  There is a difference of opinion between the school and a former interim dean as to whether or not Obama was offered tenure at the school.

The constitutional eligibility of both Cruz and Obama has been questioned publicly by presidential candidate Donald Trump.  In 2011, when Trump was considering running for president against Obama, he demanded that Obama release his “long-form” birth certificate to show that he was born in Hawaii as he claimed.

Under apparent duress, in April 2011, the White House released what it said was a scan of a certified copy of Obama’s long-form birth certificate obtained from the Hawaii Department of Health.  Within two days, however, the image was declared a forgery by a number of graphics professionals, with no one definitively vouching for its authenticity.

On March 1, 2012, the results of an investigation launched by the Maricopa County, AZ Cold Case Posse led by Mike Zullo at the request of Maricopa County Sheriff Joseph M. Arpaio were made public:  that the long-form birth certificate image posted on the White House website and Obama’s Selective Service registration form are “computer-generated forgeries.”

Prior to Cruz’s announcing of his candidacy, it was generally believed by most Americans that “birth on U.S. soil” is required to meet the “natural born Citizen” qualification.  In March 2013, Fox News’s Carl Cameron stated unequivocally that Cruz was not eligible due to his birth in Canada.

Since Obama’s election, constitutional scholars, attorneys, and citizen researchers have uncovered a plethora of evidence showing that the citizenship of the parents, or historically the father, determined the child’s citizenship.  Further, a letter written by Founding Father John Jay to George Washington during the Constitutional Convention of 1787 appears to show that a higher standard, indicated by the term “natural born Citizen” as opposed to simply “Citizen,” was considered vital to protecting an individual with foreign influence from taking control of the nation’s military.

On March 11, 2015, an editorial was published in the Harvard Law Review which attempts to make the case for Cruz’s eligibility through his mother’s U.S. citizenship.  Written by two former solicitors general – one who served under Obama and the other under George W. Bush – the piece begins:

We have both had the privilege of heading the Office of the Solicitor General during different administrations. We may have different ideas about the ideal candidate in the next presidential election, but we agree on one important principle: voters should be able to choose from all constitutionally eligible candidates, free from spurious arguments that a U.S. citizen at birth is somehow not constitutionally eligible to serve as President simply because he was delivered at a hospital abroad.

Katyal and Clement neglect to say that the law was repealed and replaced with more stringent naturalization requirements in 1795 which also omitted the reference to children born abroad being “natural born Citizens.”  When questioned about his eligibility, Cruz has led the public to believe that the “settled law” to which he refers is still in effect.

Any Act of Congress was passed following the drafting and ratification of the U.S. Constitution, where the “natural born Citizen” phrase resides.

Cruz worked at the Federal Trade Commission (FTC) and as an associate deputy attorney general in the early years of the George W. Bush administration.  The FTC responded to The Post & Email’s FOIA request for Cruz’s documentation last spring, pointing to already-published documents online.

From 2003 to 2008, Cruz served as Texas Solicitor General, the application forms for which were obtained by The Post & Email through a Texas Public Information Act request demonstrating that the question of U.S. citizenship was not posed.

The U.S. Department of Justice provided an acknowledgement letter dated April 16, 2015 but nothing more.  On Tuesday, The Post & Email placed a follow-up call to the DOJ, which transferred us to the Office of Information Policy (OIP), where we left a voice message referencing the request.

From a hard-copy received in the U.S. mail last week, The Post & Email has learned that the American Bar Association (ABA) does not currently ask whether or not the applicant is a U.S. citizen; whether or not it ever did is unknown.

While Cruz’s father has questioned Obama’s origins, there is no question that the elder Cruz’s son was born a Canadian citizen to a father who did not assume U.S. citizenship until 2005.

In August 2013, The Dallas Morning News reported that Rafael Edward Cruz provided a copy of his birth certificate showing that he was born in Calgary on December 22, 1970, which made him a “dual citizen.”  To date, Cruz has not released any documentation connecting himself to U.S. citizenship, although in renouncing Canadian citizenship, which Cruz did in 2014, the question of whether or not citizenship is or shortly will be held in another country is presented.

Like Obama, Cruz has not released his college transcripts which might indicate the citizenship he claimed when applying.  However, CNN reported last month that a Princeton classmate of Cruz’s recalls Cruz acknowledging his dual citizenship and speculating as to whether or not it would preclude him from serving as U.S. president.

In an interview with CNN, Cruz denied ever holding a Canadian passport. His spokeswoman, Catherine Frazier, reportedly told The Dallas Morning News that Cruz obtained a U.S. passport in 1986 for a high school trip and that Cruz had no knowledge of having held Canadian citizenship.

Obama has not released any of his passport applications despite a $50 million challenge from Trump to do so in October 2012.

Cruz’s Selective Service registration form, obtained through a FOIA request last year, contains a blacked-out box for his Social Security number but does not specifically ask about citizenship.  Citizens of countries other than the U.S. have served in the U.S. military.

Today, the Selective Service System states that “Dual nationals of the U.S. and another country are required to register, regardless of where they live, because they are U.S. nationals. See also U.S. NON-CITIZENS AND DUAL NATIONALS – LIABILITY FOR SERVICE.”

On Tuesday, Cruz is facing three ballot challenges in the state of New York.  Ballot objections to his claimed eligibility have been filed in New Hampshire, Indiana, Alabama and Illinois.  Some objectors have gone further and filed formal lawsuits, as in Texas, Illinois and Utah.

In an email exchange between February 3 and 5, 2016, The Post & Email queried the State Bar of Texas for Cruz’s registration documentation and on Monday, February 22, received the following letter: Cruz’s State Bar of Texas registration card does not ask whether or not he is a U.S. citizen. For documentation of Cruz’s licensure as an attorney in Texas, we were referred to the Texas Board of Law Examiners, which responded that records are not maintained there for longer than five years.

While some mainstream reports have stated that Cruz “changed his name to Ted when he was 13,” a more accurate statement, given the name he provided on his State Bar of Texas registration card, might be that he chose to be called “Ted” rather than “Rafael” or “Edward.”