(Mar. 27, 2011) — The Post & Email is in receipt of two return-receipt cards from the U.S. Postal Service confirming that both Hawaii Governor Neil Abercrombie and Lt. Governor Brian Schatz’s offices are in possession of the letter sent last week with the  names of the signers of the second and final Hawaii Petition Campaign.

The office of the third recipient, Ms. Loretta Fuddy, Acting Director of the Hawaii Department of Health, to date has not returned the receipt.  The Health Department has said that Obama’s vital records are protected by state privacy laws, although past presidents and candidates have made their original birth certificates available to the public (see below).

The Post & Email had faxed a letter to Abercrombie on January 19, 2011 regarding the obfuscation of Obama’s purported vital records but received no response.

Recently, Donald Trump stated that “There’s something on that birth certificate that he (Obama) doesn’t like” (video clip).

After taking office in December 2010, Abercrombie had announced his nomination of Dr. Neal Palafox to head the Department of Health, with Ms. Fuddy designated as First Deputy Director. Palafox graduated from the John A. Burns School of Medicine in Honolulu in 1980.

However, Palafox reportedly withdrew his name from consideration for possibly being under investigation for “medical reimbursement fraud.”  Janice Okubo, spokeswoman for the Hawaii Department of Health, stated that Palafox “resigned for personal reasons.”  However, he was never confirmed, so he could not have resigned.

That is not the first time Okubo has apparently misspoken.  She stated in August 2009 that Hawaii no longer issued “long-form” birth certificates, but that statement has been proven false by video evidence collected by a researcher who traveled to the Hawaii Department of Health last summer.  Okubo also told the Associated Press that birth index data was available in one-year increments but that no one had requested such from her office, which was patently untrue.

Abercrombie stated in January that after a search purportedly conducted by his office, no original birth certificate for Obama could be found at the Health Department, contrary to the statements of former Gov. Linda Lingle and her health director, Dr. Chiyome Fukino.

The first Hawaii Petition Campaign letters were sent on March 1, 2010. 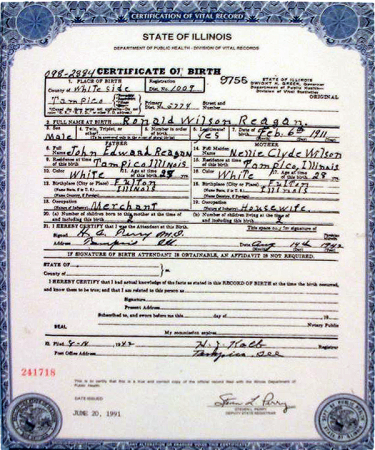 Obama’s birthplace might or might not be a factor in determining whether or not he qualifies as a “natural born Citizen” as required by Article II, Section 1, clause 5 of the U.S. Constitution.  The only document made available which bears Obama’s name is a Certification of Live Birth, or a “short-form” birth certificate lacking vital details of the birth such as the parents’ identities and occupations, length and weight of the baby, birth hospital, and the attending physician’s signature.  The internet image also lacks information available on recently-issued short-form birth certificates from Hawaii.

There have been different reports of Obama’s birth hospital, to which Donald Trump alluded in an interview with Newsmax last week.  Several allegations have been made that he was born in Mombasa, Kenya, including members of the Kenyan Parliament, several African newspapers, and his wife.  There is evidence that Google has removed information from its archive on Obama’s birthplace.

The Hawaii Petition Campaign is now closed, and the website will be updated to reflect that shortly.

Update, March 29, 2011: The Post & Email has received the last return-receipt card from the certified mailing to Ms. Loretta J. Fuddy, Acting Director of Health at the Hawaii Department of Health.

7 Responses to "Update: Hawaii Governor and Lt. Governor Have Received their Petition Letters"