(Feb. 24, 2020) — Two videos produced within months of each other in which “Freedom Friday” host and longtime pastor Carl Gallups discussed the Obama birth-certificate investigation show significant differences in Gallups’s demeanor, intensity, and attempts to connect himself to the investigation, The Post & Email has found.

In a January 5, 2017 interview produced by SkywatchTV, Gallups spoke with “prophecy” author Derek P. Gilbert about the investigation into the birth-certificate image authorized in August 2011 by then-Maricopa County, AZ Sheriff Joseph Arpaio.

At an early stage, the probe found the image to be a “computer-generated forgery.”  Also determined fraudulent is Obama’s purported Selective Service registration form, Zullo reported at an initial March 1, 2012 press conference.

In his interview with Gilbert, Gallups’s tone was thoughtful and measured as he provided background as to the reason Arpaio launched the probe, the multiple crimes that were likely committed in the creation of the forgeries, and the mainstream media’s ridicule of anyone doubting Obama’s claimed birthplace in Hawaii utilizing the “birther” pejorative. 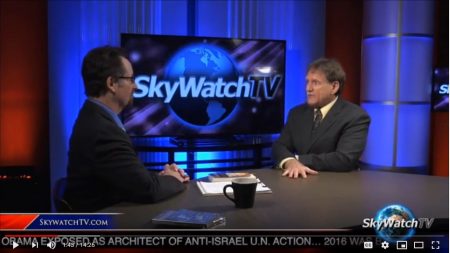 Gallups told Gilbert that the quintessential question was whether or not the birth-certificate image, uploaded to the White House website after then-businessman Donald Trump stridently demanded its release over several months, is “authentic.”  Throughout the interview, Gallups recited facts gleaned from the investigation, including recounting Zullo’s December 15, 2016 revelation that two forensic document analysts agreed with Zullo that the Obama “long-form” image cannot be considered authentic.

At two points in the interview, Gallups conflated two “challenges” Trump made to Obama regarding the release of his identifying documents: the late 2010/early 2011 calls for the release of Obama’s “long-form” birth certificate, and an October 2012 offer of $5 million to go to a charity of Obama’s choosing in exchange for his release of passport records, college applications and transcripts.  Neither that offer, nor an offer of an increased donation of $50 million, received a response from the White House.

In stark contrast, in an interview seven months later with theDoveTV‘s Perry Atkinson, Gallups not only placed himself in the sheriff’s inner circle, giving the viewer the impression that he had been an investigator in one or more MCSO probes and possessed privileged information, but also drew a connection between those investigations and  the “globalist anti-Christ agenda.”

Gallups’s remarks to that effect begin at the 8:00 mark.

Invoking both Arpaio and Zullo’s names, Gallups said, “I was deputized by Sheriff Arpaio during those days.  I’d been working closely with all of that. We’d been telling the world for years about the Deep State.  We knew that Donald Trump was being spied upon by government agencies before he ever ran for president; we had the hard-copy evidence of it given to us by CIA informants, whistleblowers, and the investigations that Sheriff Arpaio was involved in; we knew it. And we’ve been telling the media; we’ve been warning the media; we’ve been begging Congress; we couldn’t get a single congressman to look at it; we couldn’t get a single media source to report on it, the mainstream media; everybody called us conspiracy freaks and tinfoil-hat-wearing nuts, and we were involved in the middle of a criminal investigation from the fourth-largest sheriff’s office in the nation, but we were summarily marginalized by the media and by Congress and by the courts.  They’re all complicit, brother. This thing called ‘Deep State’ is deeper than anyone imagines…”

He then referred to “stuff I’m not allowed to talk about.”

As to Gallups’s claimed “deputization,” Zullo explained on Friday that in January 2016, Gallups was in Phoenix on business and Arpaio chose to recognize his support of the birth-certificate investigation through his radio show by making him an impromptu “honorary” deputy.  The designation came without any legal authority and was not a “sworn” role, Zullo said.  “It is honorary, a ‘thank-you’ for supporting the Office at some level from a civilian position,” he said.

“We are in the midst of prophetic times; it’s deeply demonic, and it is deeply Deep State; there is an agenda,” Gallups told Atkinson.  “and we’re in a war; we’re in a spiritual war, Perry; it’s as simple as that, and I hate that I am now able to say ‘I told you so…’ I wished it was that I was a nut; I wished it was that I was a mere conspiracy theorist…When you know stuff ahead of time, whether it’s through prophetic revelations from God or just investigations and both, you’re always on the cutting edge, and you’re always ahead of your time, and we have been…”

When Atkinson asked where the Mueller investigation launched four months prior might lead, Gallups responded, “Brother, all I’m allowed to say, based upon what I know and now what you know from mainstream media reports, we knew this was going on; we knew this was going to happen; we tried to warn America but nobody would listen because they thought we were idiots…if the hand of God is removed from this, they will somehow take Trump out of office.  Listen, the globalists are behind this; this is the spirit of anti-Christ.  I am convinced that our nation has been infiltrated; our political system has been infiltrated from the White House of the previous administration and previous administrations, prior administrations, to Congress to the court system to the media to the institutions of higher learning…the globalist anti-Christ agenda cannot come to fruition unless America is gone…”

As this writer reported last week, Gallups and Zullo had a years-long agreement to jointly write a book about the investigation to which they referred in a January 2019 broadcast. However, in October 2019, Gallups told Zullo that he considered himself free to write a chapter about the probe on his own, with or without Zullo’s approval, to be included in an upcoming book authored by Horn.

The book in which Gallups’s chapter now appears, “Shadowland,” has been available on Kindle since January 5, 2020.

In late September Zullo asked Gallups to call him to discuss the chapter Gallups was already in the process of writing.  As of Monday, Zullo told us, he was “still waiting” for a call.

Neither Horn nor Gallups has responded to The Post & Email’s multiple requests for comment as to why the chapter is included in a book about “the Occult Elite,” the Washington, DC political class, and the late accused child-abuser, Jeffrey Epstein.  Even more bewildering is the fact that Gallups completely excised Zullo from the chapter, thereby omitting key facts and complete context for readers unfamiliar with the topic.

Gallups’s unilateral severance of the agreement with Zullo included a number of emails which Zullo has requested The Post & Email not release publicly at this time. However, this writer observes that Gallups’s sudden hostility toward Zullo began the destruction of a seven-year-long professional relationship in which Gallups not only provided a media outlet for Zullo, but also served as Zullo’s confidant in a pastoral capacity.

As we reported on Friday, in late September, both Horn and Gallups promised Zullo in writing that they had made the decision not to include the chapter in Horn’s upcoming book; Horn also assured Zullo that he had no plan to use the chapter in any future publication.

Horn has not responded to The Post & Email’s question as to why he published the birth-certificate chapter despite that assurance, particularly without any input from Gallips’s only primary source of information on the investigation, Mike Zullo, or the mention of his name.

In response to Gallups’s abrupt about-face last fall, Zullo told us, “He wasn’t like that in the beginning.”

As Zullo related in our earlier article, Gallups flew from his home in Florida to Phoenix to attend the presser, with a longtime observer generously offering to pay for his airfare. After the press conference, approximately 30 individuals, including Sheriff Arpaio and Gallups, went to Zullo’s home to mark the official end of the investigatory part of the Obama birth-certificate saga.

An attendee recently told The Post & Email that at the time, Gallups and Zullo appeared very comfortable in each other’s company and to have a relationship based on mutual trust.

This writer noted that as of early last month, Gallups uncharacteristically ceased to respond to her emails of a completely benign nature, such as an inquiry as to when the book would be available for purchase. Similarly, Gallups’s executive editor, Mike Shoesmith, who this reporter also considered a longtime colleague, did not respond to emails about the book and whether or not Gallups’s contact information had changed.  This writer finds Gallups’s altered behavior striking and troubling.

An example of Gallups’s branching out independently, rather than allowing Zullo to release any new information, arose in a September 6, 2019 broadcast wherein Gallups and Shoesmith discussed an article published September 4 at FrontPageMag.  The article raised questions as to whether or not Obama ever attended Columbia University, as he claims, but as with many pieces critical or inquiring about Obama’s history, as of this writing, it is no longer there.

During the show, Gallups unexpectedly said that “some of us” “know who” Obama “really was,” giving the impression, at least to this writer, that he was in possession of privileged information which Zullo had approved for public consumption.  At the same time, upon our request Gallups promptly provided this writer with a description of the content of the upcoming chapter.

However, Zullo later told us that Gallups had no basis upon which to make the claim of having privileged information.

Zullo is concerned that Gallups’s failure to relate crucial details about the birth-certificate probe, along with his inflation of his role in it, will prove “damaging to the integrity of the investigation.”  “He’s dangerous on his own, because the information he was privy to is not directly developed by him; he doesn’t have it in the full context of the development,” Zullo said.  “He has told the story so many times, and in the later years, he has tried to morph the story and take ownership of things he’s never participated in.  That’s very dangerous; I think he is unable to distinguish truth from his own hyperbole.  I have been watching this situation deteriorate over the last few years. This is why this is a major concern going forward.  Somebody like this believing their own contrived story line can lead people into wrongly believing he was there or deeply involved. He actually speaks from a position of unearned authority. It is disheartening to see and it simply is not reality.”

Through numerous conversations with Zullo, this writer has come to understand his trepidation as to the public’s perception of Gallups as the recipient of certain privileged information from the investigation when, Zullo said, he is not.

Why the Change in this Longtime Confidant? added on Monday, February 24, 2020

2 Responses to "Why the Change in this Longtime Confidant?"