AND COULD LEAD TO AN “ARTICLE OF IMPEACHMENT”

“Intimidating a witness is a crime,” Baier said.

The hearing, in which Yovanovitch is the only witness, is the second of its kind, the first on Wednesday having heard from current Acting Ambassador to Ukraine William Taylor and Deputy Assistant Secretary of State George Kent, a 27-year veteran of the department.

The hearings are being conducted as part of Speaker of the House Nancy Pelosi’s September 24 declaration of an “impeachment inquiry” after a “whistleblower” complaint claiming President Trump abused his power during a July 25 telephone call with Ukrainian President Volodymyr Zelenskiy for political gain.

On the same day, the White House released a transcript of the call, which Trump continues to describe as “perfect.”

For his part, Zelenskiy has stated on multiple occasions that he felt no pressure as a result of the conversation, which lasted approximately 30 minutes and included Trump’s request for “a favor” in the form of an investigation into possible wrongdoing on the part of Burisma Holdings, a Ukrainian energy company.

While Joe Biden served as Obama’s vice president and liaison to Ukraine between 2014 and 2016, his son Hunter was made a member of the Board of Directors of Burisma, collecting between $50,000 and $83,000 monthly, according to public reporting.

Baier further opined that Schiff’s focus on Trump’s “real-time” tweet, which criticized Yovanovitch’s performance in various countries over her 33-year career, caused the hearing to “turn on a dime.”  He further claimed that when the hearing convenes and the Republican counsel directs questions to the witness, Republicans would “have to clean this up.”

Fox News’s John Roberts said minutes later in a report from the White House that Schiff’s reading of the tweet to Yovanovitch enabled Trump and her to “communicate directly during a congressional hearing.”

Baier and Roberts’s tweets on the subject at the time read: 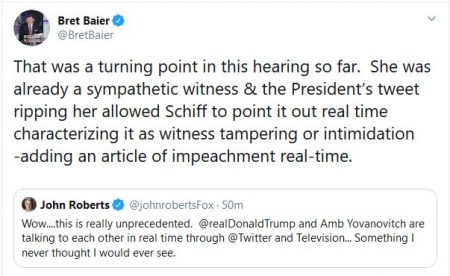 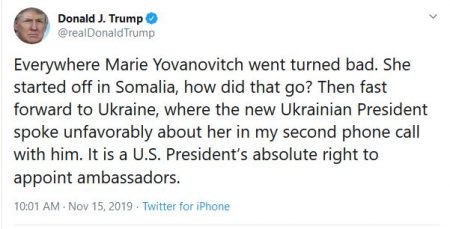 “The can make the Article of Impeachment into whatever they want…” Baier commented at 11:12 a.m. to his panel of pundits and legal experts, “so the president’s tweet was a big part of the hearing.”