SEEKING THE TRUTH OR ESTABLISHING A NARRATIVE? 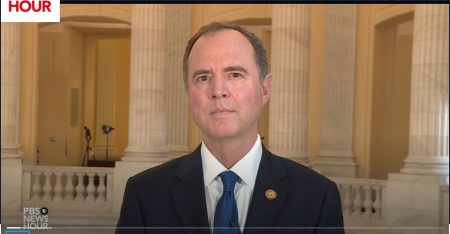 (Nov. 15, 2019) — In his opening remarks in Friday’s “impeachment inquiry” hearing with former Ukrainian ambassador Marie Yovanovitch as the sole witness, House Intelligence Committee Chairman Adam Schiff again referred to the notion that Ukraine interfered in the 2016 U.S. election as a “conspiracy theory.”

The mainstream media has taken the same position, calling the allegation a “debunked conspiracy.”

Schiff clearly defended Yovanovitch as a dedicated public servant who was unduly recalled from Ukraine in May by the Trump administration.

In another opening statement, ranking member Devin Nunes stated that Ukraine did, in fact, meddle in the U.S. 2016 election.  Previously, he has reported that the Russia “collusion” dossier used to obtain surveillance warrants on former Trump campaign adviser Carter Page has its origins in Ukraine.

Another former Trump campaign adviser, George Papadopoulos, contends that Ukraine played a role in attempting to sabotage the Trump candidacy.  In his book released in March, Papadopoulos wrote that he was a “Deep State Target” of the intelligence operations of Ukraine, Australia, the UK and Italy as they coordinated with the CIA and FBI.

According to reporting by John Solomon on Wednesday, sources in both the U.S. and Ukraine say that Yovanovitch interfered in Ukrainian politics and attempted to pressure the government to fire one of its prosecutors.  Solomon’s report also states that the U.S. State Department was partnering with a George Soros-funded non-profit aimed at combating corruption in Ukraine.  His report states, in part:

State officials confirmed that Soros’ foundation and the U.S. embassy jointly funded the AntiCorruption Action Centre, and that Soros’ vocal role in Ukraine as an anticorruption voice afforded him unique access to the State Department, including in 2016 to the top official on Ukraine policy, Assistant Secretary of State Victoria Nuland. (That access was confirmed in documents later released under FOIA to Citizens United.)

Soros’ representatives separately confirmed to me that the Anti-Corruption Action Centre was the leading tip of the spear for a strategy Team Soros devised in 2014 to fight corruption in Ukraine and that might open the door for his possible business investment of $1 billion. You can read the Ukraine strategy document here and Soros’ plan to invest $1 billion in Ukraine here.

After being tipped to the current Yovanovitch furor in Ukraine, I was alerted to an earlier controversy involving the same U.S. ambassador.  It turns out a senior member of Congress had in spring 2018 wrote a letter to Secretary of State Mike Pompeo alleging the ambassador had made anti-Trump comments and suggesting she be recalled. I confirmed the incident with House Rules Committee Chairman Pete Sessions and got a copy of his letter, which you can read here. Yovanovitch denies any such disloyalty to Trump.

Nonetheless, I had a career diplomat and a Republican lawmaker raising similar concerns. So I turned back to the sources I had developed starting in 2018 on Ukraine and began to dig further.

I learned that Ukrainian officials, particularly the country’s prosecutors, viewed Yovanovitch as the embodiment of an activist U.S. embassy in Kiev that ruffled feathers by meddling in internal law enforcement cases inside the country.

The media also termed the forgery of Obama’s “long-form” birth certificate a “debunked conspiracy theory” based on no investigative research of its own and in response to a five-year criminal investigation which showed that not only is the image fraudulent, but also that Obama’s purported Selective Service registration form is a “hard-copy forgery.”

Neither Congress nor the FBI has ever investigated those findings.