(Nov. 1, 2019) — On Friday afternoon, an individual visiting The Post & Email from an IP number belonging to the law firm “Perkins Coie” accessed an article focusing on misinformation reported in 2016 by The New York Times about the alleged retrieval of Barack Hussein Obama’s “long-form” birth certificate from the Hawaii Department of Health (HDOH) in 2011.

In April that year, Corley, also of Perkins, was acting as Obama’s “personal” attorney when she allegedly traveled to Honolulu to pay for two certified copies of Obama’s original birth certificate, which for months then-businessman Donald Trump had pressed the White House to release in order to assure Americans that Obama was eligible to the office he occupied.

By mid-morning on April 27, 2011, the White House released what it said was a PDF scan of one of the certified copies showing that Obama was born at the Kapiolani Medical Center for Women & Children on August 4, 1961 at 7:24 p.m.

Just before the public release of the image, Perkins Coie founding member and then-White House Counsel Robert Bauer vouched for the authenticity of paper reproductions of the image handed out to reporters in an off-the-record meeting.

The firm also defended Obama in a high-profile case brought early in his first term challenging his constitutional eligibility to serve as president and commander-in-chief given reports that he was born in Indonesia or Kenya and not Hawaii, as he claimed.

Perkins Coie has long represented the Democratic National Committee (DNC) and specializes in “political law.” In 2016, on behalf of the DNC, the firm paid Fusion GPS to obtain derogatory information about then-Republican presidential candidate Donald Trump and Russia, a task Fusion carried out through subcontractor, British citizen and former intelligence agent Christopher Steele.

The unverified “Steele dossier” was eventually used to obtain four FISA warrants on former Trump campaign adviser Carter Page, whose communications were monitored by the U.S. intelligence community for approximately a year.  Those communications, Page told investigative reporter Sharyl Attkisson in March, likely extended to Trump’s inner circle and possibly even Trump himself.

The Post & Email’s article which Perkins accessed was published on August 28, 2016 and titled, “The New York Times Claims Obama Attorney Sent to Hawaii to ‘Find’ Long-Form Birth Certificate.” It points out the erroneous claim in The Times‘s article, “Inside the Six Weeks Donald Trump Was a Nonstop ‘Birther,'” that “The White House counsel dispatched someone to Hawaii to find the president’s original long-form birth certificate from 1961.”

The Times, which has proven itself vehemently opposed to Trump both personally and as the current chief executive, wrote at the time:

Mr. Trump’s eagerness to embrace the so-called birther idea — long debunked, and until then confined to right-wing conspiracy theorists — foreshadowed how, just five years later, Mr. Trump would bedevil his rivals in the Republican presidential primary race and upend the political system.

In the birther movement, Mr. Trump recognized an opportunity to connect with the electorate over an issue many considered taboo: the discomfort, in some quarters of American society, with the election of the nation’s first black president. He harnessed it for political gain, beginning his connection with the largely white Republican base that, in his 2016 campaign, helped clinch his party’s nomination.

“Birther” was the pejorative the mainstream media affixed to anyone questioning Obama’s birthplace and life story as well as the lack of a more detailed, or “long-form,” birth certificate containing the signatures of an attending physician and/or nurse, the mother, the parents’ addresses and occupations, and their respective places and dates of birth.

In June 2008, an unknown party released a “short-form” birth-certificate image said to have been obtained from the HDOH by the Obama campaign.  The HDOH never confirmed that it produced a paper document underlying the image, which was posted at Obama’s campaign website, The Daily KOS, and mainstream news sites.

Contrary to The Times‘s reporting, Corley’s trip, documented by the Obama White House in a letter dated April 22, 2011, was not billed as a mission to locate Obama’s purported birth record.  “I am writing on behalf of my client, President Barack Obama.  Enclosed please find a letter from my client requesting two certified copies of his original certificate of live birth and authorizing me to act on his behalf in completing this request,” Corley wrote to then-HDOH Director Loretta Fuddy. 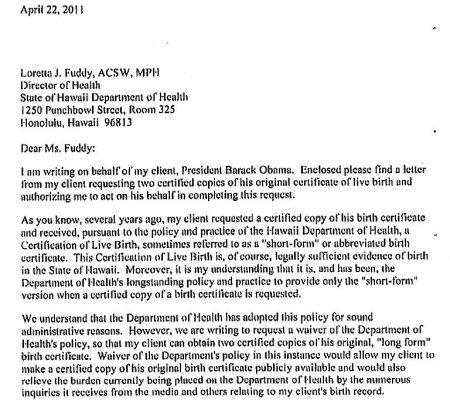 Corley’s letter was accompanied by one from Obama, to which Fuddy responded on April 25, 2011:

I have reviewed your request for two certified copies of your original Certificate of Live in Birth. As the Director of Health for the State of Hawaii, I have the legal authority to approve the process by which copies of such records are made. Through that authority, in recognition of your status as President of the United States, I am making an exception to current departmental policy which is to issue a computer-generated certified copy…

Enclosed please find two certified copies of your original Certificate of Life Birth. I have witnessed the copying of the certificate and attest to the authenticity of these copies…”

I have reviewed your request for two certified copies of your original Certificate of Live in Birth. As the Director of Health for the State of Hawaii, I have the legal authority to approve the process by which copies of such records are made. Through that authority, in recognition of your status as President of the United States, I am making an exception to current departmental policy which is to issue a computer-generated certified copy…

Enclosed please find two certified copies of your original Certificate of Life Birth. I have witnessed the copying of the certificate and attest to the authenticity of these copies…”

Fuddy died in December 2013 following a hard water-landing of the small plane in which she had been flying with eight others on official state business, and Corley is now retired.

After a number of computer professionals quickly declared the birth-certificate image problematic, the Maricopa County Sheriff’s Office (MCSO) authorized an investigation to purportedly “clear the president” and remove any suspicion that the image was not authentic.

Several days later, lead investigator and former detective and private investigator Mike Zullo reported to MCSO Sheriff Joseph Arpaio that his team was unable to clear the image as having originated with a real, paper document.

What became a 5+-year criminal investigation led Zullo, and later two forensic experts brought in to render their opinions, that the birth-certificate image is a “computer-generated forgery.”

In 2016, another Perkins Coie member and former Justice Department attorney Michael Sussmann met with then-FBI General Counsel James Baker to allege that a Trump Tower computer and that of a Russian bank were in communication. The revelation was made during Baker’s closed-door testimony to members of Congress last year as part of their investigation into the origins of the Trump-Russia “collusion” probe, which promoted the false narrative that Trump and/or members of his campaign conspired with the Kremlin to gain an election advantage.

At the time of Baker’s testimony, his counsel revealed that he was under investigation for possibly leaking sensitive FBI information to the media.

DNC emails released by WikiLeaks in July 2016 show Perkins Coie lawyers Bauer, Marc Elias and three others discussing a “strategy” with the Clinton campaign as to how to derail the candidacy of Clinton’s primary challenger, Sen. Bernie Sanders, law.com reported.

Bauer continues to maintain that Trump is a “racist” because of his questioning of Obama’s eligibility. In a May 2019 editorial at The Atlantic, Bauer wrote:

Trump repeatedly hawked the lies that Obama was born in Kenya, had hidden his real birth certificate, and had manufactured the one he publicly presented. And if there was any chance that this was not true—and Trump left little room for that possibility—he questioned whether Obama had traded on his race to gain admission to elite educational institutions. With this one, ugly political stunt, Trump managed to display both of the ugly character traits that his former lawyer singled out for the House: the conning (i.e., chronic lying) and the racism.

This was not dog-whistle racism; Trump was shouting it out. As The New York Times argued, Trump was waging nothing less than a “campaign” around these lies, and it was impossible to imagine that this line of attack on Obama “as the insidious ‘other’ would have been conducted against a white president.” And because Trump was getting the attention he wanted, he kept going. He was able to command a national audience, and the press he craved, for a barefaced lie encoding a racist message.

Trump did so well that in April 2011, the White House obtained and released additional documentation: the “long-form” birth certificate. At the time, I was serving as White House counsel and was charged with coordinating the acquisition of the form. It was not the “official” birth certificate the Obama campaign had publicly posted years before. Long forms contain more information, such as the ages and birthplaces of the parents and the name of the hospital, but they are not more authoritative than the official certificate in confirming the date and location of birth.

By acquiring and releasing this document, the White House might have been taken to be conceding that what it had previously put out was not adequate or reliable. It was not conceding anything of the sort. But it faced a problem: Reporters had begun pressing for the White House to find and produce the long form, as if this were the response that the president reasonably owed his accuser.

Somehow it was thought foolish to ignore the lies and the message they conveyed. No responsible observer or member of the press doubted the official birth certificate, and there were other pieces of corroborating evidence, such as the birth notice that had appeared in the Hawaiian press. This was, perversely, deemed insufficient. President Obama supposedly needed to do more to quiet the birthers and their most vocal national spokesperson, Donald Trump.

That same month, Bauer left Perkins “to devote more time to his teaching at New York University School of Law and his writing and speaking on contemporary topics in constitutional law, legal ethics and political reform.”

In August of last year, Zullo revealed that two experienced U.S. intelligence agents informed him that it is “an open secret” in the nation’s capital that Obama was not born in the United States and cannot meet the “natural born Citizen” requirement in Article II, Section 1, clause 5 of the U.S. Constitution reserved for the president and commander-in-chief.

In recent interviews Zullo has said he believes that in regard to the birth certificate, “all roads are going to lead to John Brennan,” Obama’s last CIA director.  This month Brennan and other former high-ranking members of the U.S. intelligence apparatus were said to be under scrutiny by the Justice Department’s investigation into the origins of the Trump-Russia “collusion” probe.

On Friday The Washington Examiner reported that Brennan and former FBI Deputy Director Andrew McCabe “say they are willing to cooperate with [John] Durham,” the U.S. attorney Attorney General William Barr designated in May to lead the “investigation of the investigators” who spawned the Russia “collusion” narrative.