“WHEN IS ENOUGH ENOUGH?”

(Oct. 1, 2019) — “Good evening, ladies and gentlemen, and welcome to another exciting episode of on-the-road reporting from ‘The Pulse of the Nation.’  As we were leaving Madam Shylock’s Crystal Ball Emporium, located in Cassadaga, FL, Henry,…well, to make a long story short, we’ll just play the tape.

Camera shows Roving and crew waving goodbye to Madam Shylock as the soundtrack picks up a “Psst-croak, over here, under the leaf to the right of your shoe.”

“I have some potential breaking news that you might be interested in, and it’ll only cost you a jar of flies. Eating flies off flypaper is like eating a burger cooked from frozen compared to one being cooked after being thawed.”

“I understand. All right, you got it: one jar of live healthy flies. So what have you got for us?”

“One jar of flies with a moth or two.”

“See this shaving cream canister? I’m supposed to sneak into the CNN studios and spray some of this around. It’ll make them apologize for lying to us.”

“I don’t understand: how would that work?”

“It’s pretty straightforward, but also pretty confusing. Here, let me give you an example: Let’s say a reporter is saying, ‘We now have the proof that the Russian collusion was for real. Oh, sorry, we don’t have any proof of something that never happened in the first place.’”

“How about an Adam Schiff report; how would that go?” 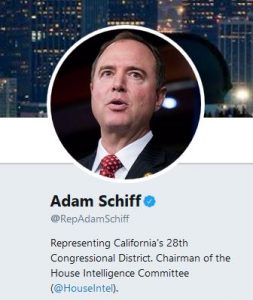 “’Adam Schiff yesterday reported that the whistleblower was reporting nothing but the truth, so Schiff will continue to pursue his actions protecting us and the Constitution. Oh, sorry, but Adam Schiff knows that this turncoat doesn’t know diddly and Schiff doesn’t give a rat’s behind about the Constitution, America or his constituents.’”

“Is there any downside to this drug?”

“Besides losing their jobs? No, none at all. It’ll completely wear off within a week or two. But here’s the thing: it only affects liars, and they won’t even know when they’re not lying.”

“So where did this drug come from and who told you to do such a thing?”

“And there he goes, and we’ll take that as being our cue to break for a commercial.  When we come back we’ll be back on our corner, under the awning, across the street from the railroad station.”

“And we’re back, live, on our corner. Excuse me, Miss, Roving here for ‘Pulse.’”

“Oh, hello, Mr. Roving. Used to watch ‘Pulse’ on TV but they took you off the air; why was that?”

“Contract dispute, but it was more about the burgers than anything else. So, what’s your name and what’s your pet peeve of the day?”

“My name is Naomi and my pet peeve is how the lowlifes are continually attacking President Trump. Look, they wasted two years and over $30 million on the Russian Collusion hoax and now they’re wasting more time and money on another blue herring. So I ask you, when is enough enough?”

“So now it’s a whistleblower that may just be a figment.”

“Kemp, Jay Kemp, of Kemp Insurance over on Main Street. Enjoy the transcripts, by the way, that I read in ‘The P&E.’ I like those reports from Zyklon. Is that on the up-and-up?”

“For sure. Look, if there’s one thing you can count on, it’s that ‘Pulse’ stands for truth and the American way; there’s none of this fake news here.”

“That’s what I was telling the wife the other day, that ‘Pulse’ was the real McCoy. So what’s the question of the day?”

“The question is: do you think that the Democrats continually move the goalposts?”

“Yes, but maybe you could expand just a tad.”

“I’ll try. It’s like this: the Democrats’ platform in 2016 was flawed from the beginning; that is, if you eliminate the East Coast and the West Coast and the sanctuary cities, it was flawed. Americans don’t want illegal immigrants and they are nervous about Muslims, which is understandable, seeing what happened on 9-11  Everybody wants to be safe, but the Democrats weren’t selling ‘safe’ in 2016. All they were selling, and continue to sell, is even less safe today than yesterday.”

“No, we were not. And that brings up the incompetence of the FBI, doesn’t it?”

“If it was incompetence; maybe it wasn’t incompetence at all. Maybe it was something else altogether. Maybe it was a message that if you don’t open the immigration floodgates to Europe and America, Big Ben, the Eiffel Tower and other points of national identity are next. Think about it: they left the Statue of Liberty standing, now isn’t that interesting? They didn’t touch a point of national identity, but instead went after an economic model symbol.”

“And that’s why I read The P&E; you folks really get into it, don’t you? Look, hate to talk and run, but I’m my way to the Science and Industry Museum to get mesmerized watching the toy trains go around and ‘round.”

“And thanks for stopping by. I just like to say it’s all coming to a head. We had a corrupt UN Ambassador* working with a ‘pay-for-play’ Secretary of State**, who in turn worked as partners with an ineligible president***, partners in crime in the Uranium One**** shady deal, as just one of many examples, besides the overthrow of Muammar Gaddafi, and the takeover of the oil revenues from Libya means lots of money to be split among just a few players.

“So Henry is thinking about launching a sneak attack. Should prove interesting, to say the least.”

“Two quick items: isn’t it interesting Adam Schiff’s connection with a Ukrainian arms dealer? And what Tom Fitton said was very telling: he said whenever the word ‘impeachment’ is used, replace it with the word ‘coup’ and you would be at the truth.

“And so, it’s that time again, when, on behalf of the crew, I get to wish you all a goodnight: Goodnight.

[***ineligible president: that would be Obama.]

[****Uranium One: Russian collusion between Hillary/Obama and Putin.]