The Future is Clear (RR) 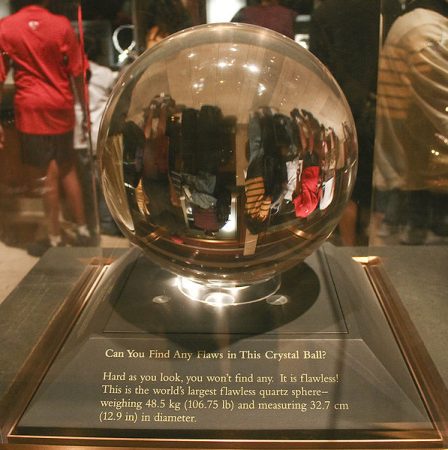 (Jan. 24, 2017) — “Good evening, ladies and gentlemen, and welcome to ‘Pulse of the Nation,’ the show that just lays it out. We’ve had quite a number of requests to revisit our fortuneteller, so here we are at Madam Shylock’s Crystal Ball Emporium in Cassadaga, Florida. Hello, my name is Roving Reporter and I’ll be your host for tonight’s show.

“Hello, Madam Shylock, and thank you for allowing us to film the proceedings.”

“You’re welcome, I’m sure, but please, not the filming of the crystal ball. You see, it is very sensitive and may crack under the stress of being filmed.”

“But surely filming couldn’t harm it.”

“Remember when the white man first visited those tribes in New Guinea and tried to take photographs of them?”

“That’s right. They ended up getting cooked and eaten, didn’t they? In some kind of potash, or potluck, ceremony, if I remember correctly. Anyway, something like that. That’s what happened to that Rockefeller guy, isn’t it? No doubt he tried to take photos of them, stealing their souls or shadows.”

“That’s the basic idea. Plus the fact that every crystal ball is unique, so we tend to protect its identity, so to speak.”

“I was at a hotel on the big island in Hawaii where they have a very unique collection of the artifacts that the Rockefeller guy managed to send back before his untimely exit. Okay, we won’t film the crystal ball.”

“We came all the way to visit you to ask you a question.”

“That part I could’ve told you. So what’s the question?”

“I know you’re all ecstatic about Trump getting elected, but let’s look at the Big Picture. Let’s all sit around this table while I’ll dim the lights. No drinks on the table, please. Thank you. Now, I’ll slowly remove the cover and the crystal ball will reveal all.”

“If we paid double would we get a better future?”

“No, but you will get a more detailed future.”

“It all helps. Now let’s get down to brass tacks: even though Trump is our new president, the future looks, at this time, today, not good for us, but good if you’re stupid and ignorant. If you’re an Obot, if you voted for Hillary, then you’ll be glad to hear that you’ll go to the head of the line.”

“It’s a metaphor for the line for the showers at the Auschwitz concentration camp.”

“You mean the concentration camp?”

“Look, I’m a little dense today, but could you spell it out?”

“Muslim ‘refugees’ are, as Trump says, the ‘Trojan Horse’ of our times. There are no ‘refugees,’ just as there has been no ‘European Union.’ There has been, however, an Islamic invasion of Western Civilization. Muslims in the United States will not assimilate and embrace our way of life, and you can take that fact to the bank.

“They will not embrace our Constitution; rather, they’ll demand that we implement Sharia Law. Earlier, we were talking about the tribes in New Guinea, which was, in a way, serendipitous to this conversation: the highest murder rates of women in the world are to be found in New Guinea and in Muslim communities, no matter where in the world they may be. The cultural acceptance of a male murdering a woman under the excuse of ‘honor’ gives all Muslim men a free pass on the premeditated murder (‘honor killing’) of women, any woman, irrespective of any cultural connection.”

“Gang rape gangs, in Sweden, for instance, whenever Muslims gather. Look, it’s just not in Sweden, but in Afghanistan and Iran: wherever Muslims are. It’s just the way they act and have acted for the last 1,400 years. It’s like, you know, nothing new. It’s not news.

“So a Muslim rapes an American teenager on a bus or a swimming pool. You know what? It’s the same as if an illegal immigrant raped that girl; I mean, they have no right being in our country. They should be deported; they NEED to be deported. So the question is, does Trump, our new president, have what it takes to do the job, to save America?”

“Well, I’d like to tell you that we’re saved but I can’t because it’s just too early to tell, but I will tell you not to hold your breath. But what do you say we give the guy a chance, okay? Will he be actually able save our daughters that live in St. Paul, Minnesota, or anywhere else in America?”

“Only one person has the power to save us. At least he says ‘Islamic Terrorists,’ which is a first step.”

“Okay, thank you. And our time is up and so, on behalf of the crew, I’ll be wishing you all a good night: Goodnight.

“Well, look, we’re all armed, so let’s make sure all Americans are armed, especially our daughters. Burger time: my treat.”