WAS OBAMA’S “PRESIDENCY” A SMOKESCREEN? 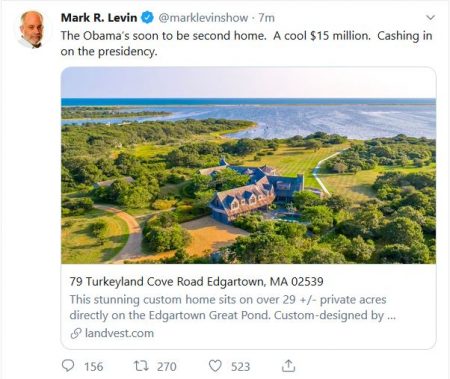 (Aug. 24, 2019) — On Saturday morning, author, radio host and host of “Life, Liberty & Levin” Mark Levin tweeted a real-estate promotional image of the $15 million property on Martha’s Vineyard which Barack and Michelle Obama reportedly intend to purchase as their “second home” with the comment, “Cashing in on the presidency.“

But was Barack Obama ever truly eligible to serve as president? That is a question which Levin and other “mainstream” legal scholars and commentators have avoided for more than a decade.

In 2007, during an interview with former Nebraska Sen. Bob Kerrey, MSNBC host Chris Matthews stated declaratively in a discussion about the Democratic primary that Obama was “born in Indonesia” and came from “an Islamic background.”

While no religious background would preclude anyone from seeking the presidency, one’s birthplace is understood to be a significant, if not paramount, component of the “natural born Citizen” requirement in Article II, Section 1, clause 5 of the U.S. Constitution.

Last year, the lead investigator of a 5+-year investigation into an image the Obama White House contended represented Obama’s “long-form” birth certificate revealed that two U.S. intelligence agents, both with long-term service, informed him that it is “an open secret” that Obama was not born in the United States.

Could that be the reason that a forgery was published on the morning of April 27, 2011 at the White House website “with the intent to deceive”?

Further, is a person born to a non-U.S.-citizen parent a “natural born Citizen”?

Not only did lead investigator Mike Zullo discover the birth certificate image to be fraudulent, but also Obama’s purported Selective Service registration form, an issue the Selective Service System (SSS) declined to investigate when then-Maricopa County Sheriff Joseph Arpaio, who commissioned the probe, and Zullo brought the matter to his attention.

Are the Obamas “cashing in” on a presidency that should never have happened? Did the Electoral College electors cast votes for an ineligible candidate? Did tens of millions of voters in America do the same?

Further, are ineligible candidates again seeking the office of the nation’s chief executive by ignoring the Article II citizenship requirement?

Why has the mainstream media refused to raise these questions?

Zullo’s investigation focused on the fraudulent birth certificate image yet also uncovered conflicting narratives surrounding the man considered to be America’s 44th president. Even prior to the time Matthews made his surprising statement on air, many Americans had already discovered that credible, mainstream sources had reported Obama as having been born in Kenya or Indonesia prior to the announcement of his presidential candidacy.

In May 2012, Breitbart News, which by a disclaimer reminded its readers that its founder, the late Andrew Breitbart, “was never a ‘Birther,'” discovered a promotional booklet for Obama’s first book which reported him as “born in Kenya and raised in Indonesia and Hawaii.” When confronted with Obama’s claim of a birth in Hawaii, the former literary agent responded that the printed statement was “nothing more than a fact checking error by me.”

If Obama never qualified under Article II for the presidency, why is he being allowed to “cash in” on his time there?

5 Responses to "“Cashing In” on Ineligibility?"