I’m prepared to debate any so-called legal scholar, professor, serious commentator or candidate on this particular issue on the air. More than happy to do it. You see it’s not just the matter of just an opinion. You have to understand the Constitution, have to understand the nature of construction, you have to understand a little bit of American history. So that makes things complicated for liberals and knee-jerkers.  But I’m more than happy to debate this issue with anybody who says that an American citizen born of an American citizen mother wherever that citizen is born is not eligible as a natural citizen as a naturalized citizen to run for POTUS.

There is absolutely no authority for that.

I’m putting out a challenge right now on this program.

At issue is whether Cruz, who was born in Canada to a Cuban father, is a “natural born Citizen” as required by Article II, Section 1, clause 5 of the U.S. Constitution for the presidency.

On January 7, Breitbart News reproduced a statement released on Levin’s Facebook page in response to an article written by Breitbart’s John Nolte in which Nolte asked, “As “stupid” as this issue may be for Levin, do we want to litigate it in front of the American people today or three weeks before the general election, when Cruz is either our presidential or vice-presidential nominee? Because you have to be wearing blinders to believe that will not happen.”

Nolte’s speculation mirrored that of Ken Post, who contacted the Republican National Committee (RNC) more than a year ago to express his concerns that an ineligible individual might receive the nomination, be successfully challenged in court by the opposing party, and disqualified at a late date in the election cycle.

Levin’s response to Nolte’s article began, “Ah, now I get it. A stupid attack on Cruz’s citizenship helps Cruz because now the Democrats won’t use it should Cruz become the GOP nominee. And, we are told, this is not a settled legal issue so we need a federal court to resolve it as quickly as possible – or resolve it some other way. And, if you reject all this as a stupid political attack that distracts conservatives from real issues, you obviously are on the wrong side of a cultural divide. Now, I expect this kind of incoherence from liberals, but not from young, aspiring conservative writers.”

A journalist is not expected to be “conservative” or “liberal,” but rather, a finder and reporter of the truth without political bias.

Beginning in 2008, questions about Obama’s eligibility were ignored by Congress, state attorneys general, governors, sheriffs, judges, the U.S. military, and secretaries of state asked to evaluate whether or not Obama’s name should appear on the 2012 ballot.  Obama claims a birth in Hawaii to a British-citizen father from Kenya who never became a U.S. citizen.

Cruz and others on his behalf have argued that the child of one U.S.-citizen parent is a “natural born Citizen,” regardless of where the child was born.  Cruz was born in Calgary, Alberta, Canada to a U.S.-citizen mother and Cuban-citizen father, the latter of whom reportedly became a Canadian citizen in 1973.

Most Americans have generally understood the “natural born Citizen” requirement to mean “born in the country,” although in Cruz’s case, he cannot make that claim.  Because of his birthplace, Cruz was a Canadian citizen until May 2014, when he applied to renounce the citizenship.  The process was finalized the following month.

In response to Levin’s on-air offer to debate the “natural born Citizen” issue, on Monday Wilmott sent the following letter: 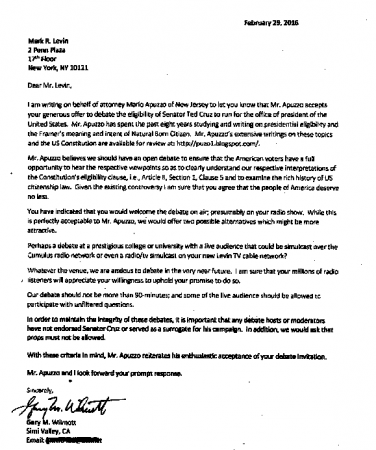 An enlarged version of the letter follows.